Industry panelists discussed multiculturalism at She Runs It event 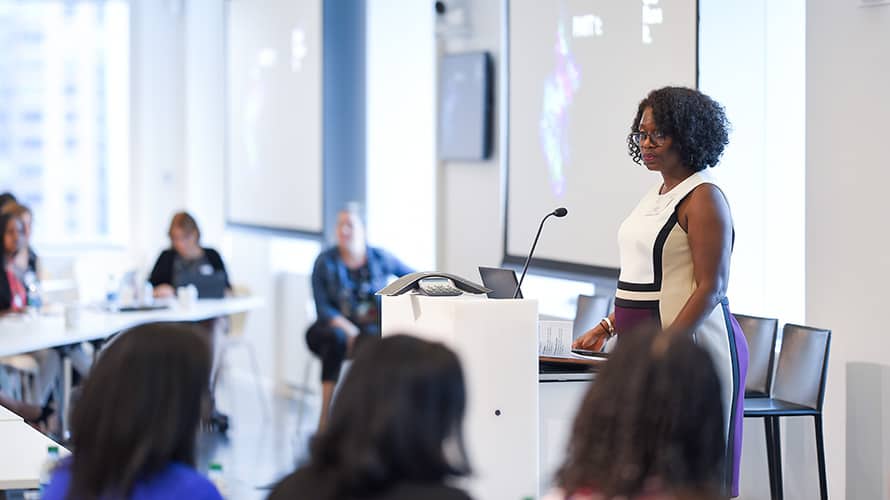 Among the reasons diversity is so important in the advertising world is that advertising reflects our culture and society, and without inclusion, advertising will continue to perpetuate stereotypes about people of color and other under-represented groups, explained God-Is Rivera, director of inclusion and cultural resonance at VML. “We cringe at ads from the past,” she said. “We have a chance to change that now.”

And, while there should be more of an opportunity to tell these varied stories with all the digital venues and platforms available today, “diversity is probably what it always was, proportionate to the number of channels we have,” said actor, producer and activist Malik Yoba.

These are some of our takeaways from the bootcamp:

There is now a quantifiable way to measure a company’s diversity inclusiveness.

Companies need to incorporate diversity “because it’s right and not just because it’s trendy,” said Rivera. She Runs It has developed a way to benchmark improvements in diversity inclusiveness.

The organization just announced the winners of a new initiative it launched in coordination with Diversity Best Practices called the Inclusion Diversity Accountability Consortium (IDAC), which “seeks to ignite quantitative action that will make the marketing and media industry more diverse in its make-up and sensibility,” according to its website.

Along with Working Mother Media and Diversity Best Practices, She Runs It posted the first round of measurements and winning companies on social media with the hashtag #DBPInclusionIndex. IDAC measures companies’ success at recruiting, training and retaining a diverse workforce based on three main criteria.

These criteria are: Best practices in recruitment, retention and advancement of people from under-represented groups; creating an inclusive culture through leadership, accountability, communications and employee engagement; and transparency in willingness to share workforce demographic data.

While the organization has released stats on select companies, it will present this information more comprehensively during Advertising Week in October.

In promoting diversity, you need to think about your own circle first.

On a panel called “Champions on the Front Line,” Patty Kim, director of talent acquisition at Conductor, talked about the importance of starting with yourself and your own innate biases before trying to advocate for diversity. You need to think about your own circle, the group of people you go to for ideas, support and growth.

When Kim first did this exercise, she realized her circle was fairly homogenous in thought—it did not represent a diverse community. “You need people who really challenge your ideas,” she said. “Inclusiveness starts with yourself—then you bring it to the workplace.”

You don’t have to be at the top to make a difference.

While it certainly helps to have an ally in a leadership position, “if you have a seat at the table, you can have influence,” said Frankel, adding that you should never give up, even if that means slowly chipping away at established ideas.

One of the best ways to do this is to tell your own story, said Francine Tamakloe, associate in the AMP development program at Spotify. “Being in the room and telling your own story inspires others and saves others,” Tamakloe said in a panel called “Women on Fire.” And while it can be easy to be inspired by others around you, it can sometimes be hard to “see the warrior in yourself,” she added.