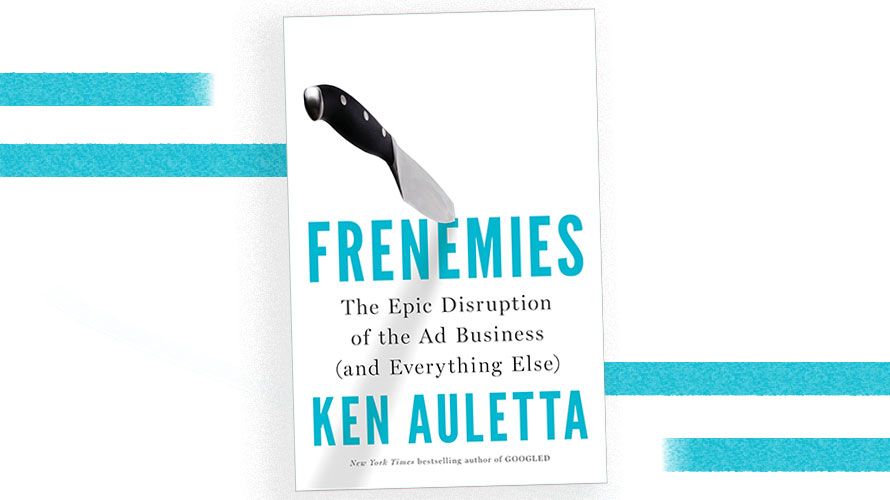 Auletta said he’s often asked if about Sorrell’s being ousted from WPP after Frenemies was written, and whether this muted the message of the book.

Ken Auletta, the writer behind The New Yorker’s “Annals of Communications” profiles, followed up the New York Times bestseller, Googled, with a thorough look inside the advertising industry.

Adweek caught up with Auletta to discuss some of the book’s key take-aways.

WPP’s post-Sorrell pivot won’t be an easy one

Auletta said he’s often asked if about Sorrell’s being ousted from WPP after Frenemies was written, and whether this muted the message of the book—a contention with which he strongly disagrees. Auletta told Adweek that Sorrell remains a “large historical figure” whose legacy remains securely in place.

“For 33 years, he ran that company. Before that, he had a huge influence at Saatchi & Saatchi,” Auletta told Adweek. “That doesn’t change because he was pushed out at all, and his influence on building the modern holding company doesn’t change—he did it.”

Replacing such a titanic figure in the industry is no easy task, he added.

“One of the things that’s interesting about Martin Sorrell is that that he didn’t have a COO, and I’m sure that was the cause of some frustration on the board’s part, because WPP owns roughly 400 companies,” Auletta pointed out. “So technically, everyone was reporting to Martin Sorrell … that’s too many to report to one man. As they go through the process of figuring out who to replace Martin Sorrell, that person has to also figure out who his or her deputy is going to be, and they’re going to have to figure out if there are companies they should shed.”

“[Erin Johnson] had really strong statements about [Gustavo Martinez’s] behavior and some of the things he said,” Auletta said. “Martin Sorrell defended him and basically said, and he said it to me, that these are accusations and someone is presumed innocent until proven guilty.”

While Sorrell’s departure may mean that the industry’s largest holding company is without advertising’s most recognizable ambassador, Sorrell is far from the only colorful character in the industry. Auletta cited several such large personalities in the business.

Omnicom’s Andrew Robinson, for example, is a “potentially big figure” who Auletta said could “potentially one day replace John Wren” and has a style harkening back to the Mad Men era, complete with “pinstripe suits and flashy ties and suspenders.”

He added that R/GA founder Bob Greenberg is “a very interesting creative guy” who “rides to work on his motorcycle” with “brill-like long hair that flows below his shoulders” complete with a black cap.

Auletta also cited Arthur Saduoun—who he said “took a fairly bold position” by not paying to send Publicis employees to Cannes and investing in building Publicis’ Marcel platform—as well as MediaLink founder and CEO Michael Kassan, industry “power broker” and a “very colorful character” who occupies a central role in Frenemies. The author even devotes an entire chapter to Kassan and MediaLink, entitled “The Matchmaker.”

The title of Auletta’s book references what has become a common thread in the industry: parties that agencies both depend on and compete with. That includes the usual candidates such as Google, Facebook and Amazon, which maintain a pronounced advantage over even the most advanced agency consumer data offerings, such as those of GroupM; it also includes global consultancies like Accenture and Deloitte, which command a pronounced size advantage over agencies and greater influence over the c-suite of clients. PR agencies and publishers’ in-house content units are also elbowing their way onto agencies’ turf.

Auletta explained that for ad agencies, frenemies are “people who are now getting into their business,” citing several examples: consulting companies, PR agencies or publishing platforms that become ad agencies; clients “moving more and more in-house”; or tech giants like Google and Facebook.

"[T]he biggest frenemy is the public, particularly with the cell phone, which is the most personal device."
-Ken Auletta

“[B]ut the biggest frenemy is the public, particularly with the cell phone, which is the most personal device,” he said, adding that consumers’ distaste for interruptive ads has led a fifth of Americans to turn to ad blockers, to the industry’s continued ire.

“How do you get around this ongoing problem that the public really doesn’t like your ads and doesn’t like to be interrupted, particularly on a mobile phone?” he mused. “That’s where they say the ad is really going to become a service to you, because we’re going to give you information you want, because we know you want it.”

But that leads to another issue.

The privacy time bomb continues to be a looming threat

“The problem becomes a privacy problem: The more data you have, the more ability you have to do what they all talk about doing, which is targeting ads at people and treating the ad not as a sales pitch, but as useful information, as a consumer tool, as a service,” Auletta explained. ” … That’s the balancing act.”

Advertisers have to worry, he added, that privacy concerns will lead the U.S. government to take actions similar to those taken in Western Europe.

“Clearly, the privacy issue has been elevated by the mistakes of Facebook, and they made a number of them in the last year—not just in the last two months,” he said.

Facebook CEO Mark Zuckerberg was able to navigate the potential minefield of congressional testimony, which mostly dealt with privacy issues, largely because politicians tend to lack the technological literacy to adequately address the issue—and to know when Zuckerberg was side-stepping questions he knew the answers to, said Auletta.

“The public in the U.S. has not been as concerned about privacy as they are in Western Europe,” he added. “Will they be? I don’t know the answer to that, but if they are, you’re going to see government become more intrusive.” And that’s something feared by agencies and their frenemies alike.