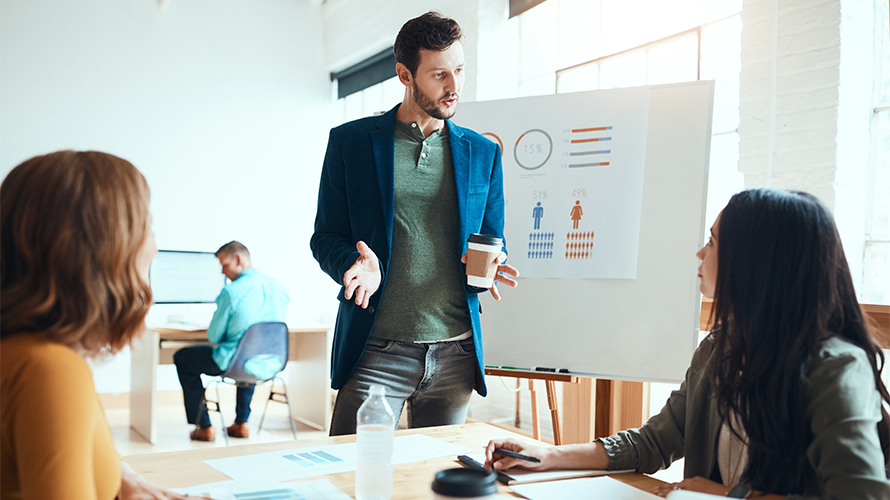 Being more mindful and avoiding any mansplaining will make the workplace feel more balanced. - Credit by Getty Images

From ad agency execs to movie moguls and members of the media, men across all industries are under a spotlight for their behavior toward women in the workplace. While some giants fall, most men—like the good guys—are wondering what they can do to help stop the systemic gender bias that’s plagued the advertising industry since its inception.

If you are one of these good guys, read on. I’m hoping to shed some light on the agency mansplain and how to correct your behavior or the behavior of men on your team. Having worked at agencies for most of my career and then starting my own while also leading a national movement for women in digital fields, I have heard and seen it all.

Some good news: The fact that you’re even wondering if you or your team is inadvertently, or perhaps deliberately, preventing women from reaching their true potential is a positive sign. Your awareness alone is a significant first step in the right direction.

To most women, the word “mansplain” is a catch-all for the ‘splain, but also the interrupting, presumptions, sexism, mistreatment and behavior that flat out offends many women at most agencies.

Sadly, there are very few men who aren’t offenders. Most of you can’t help it because you were raised to be more confident, to not shy away from any challenge, and you were most likely—along with the rest of us—programmed with stereotypes about women’s intelligence and place in the workplace.

Sometimes the very best of men may not know when they are mansplaining, interrupting or treating women with bias, but what’s the difference between the good and the bad? The good guys change their behavior without resentment or a poor attitude. The bad just don’t give a damn. So, what can the good guys do to make sure they’re not inadvertently offending or dominating over women in their office? Here are six ideas.

Don’t presume she is clueless

This is perhaps the most common. But men fighting their own gender bias are naturally apt to presume we women don’t know what we’re talking about when we likely do. Men, you must not presume we don’t know what you’re about to teach, show or explain to us.

To most women, the word “mansplain” is a catch-all for the ‘splain, but also the interrupting, presumptions, sexism, mistreatment and behavior that flat out offends many women at most agencies.

Before you dive into a ‘splain of some kind, ask if we are already familiar with whatever it is you’re about to discuss. For example, if you’re about to tell a project manager how she should manage a client budget, first ask, “Are you good with this budget?” or, “Can I give you some background?” Compare that to this version: “This budget is confusing. Let me show you how to manage it.” In a real-life version of this exact mansplain, that woman’s manager would spend minutes explaining how to manage a client budget when the woman had 20 years of project and budget management experience. You have assumptions about women, and those assumptions affect how you may be communicating with us. Just be aware, and you’re halfway there.

Never take credit for her idea

This is a big one. And so common. Guys, listen—I’m not blaming you for any of this. I am an optimist, and I always see the good in everyone. I am willing to bet you don’t even realize you’re doing it, but you steal our ideas all of the time. Sometimes right in front of everyone else in the room. Again, you may not even consciously be doing it, so just be aware. If a woman comes up with an idea in a meeting, credit her and build upon her idea with your own.

Err on the side of inclusion in meetings

A very easy way to lift women up (in spirit and financially) is to invite them to key meetings. In most cases, women are less likely than men to edge their way into a key internal or client meeting. Get her in there. This is the opposite of mansplaining and a fantastic way for you to earn some major respect from the women on your team. When in doubt, invite her to the meeting. And when she’s there, let her fly.

The first four on my list ask you to modify your existing behavior. But ideally you can add something to your repertoire by bragging her work. Go out of your way to make sure the upper management suite (the C-level you as a man statistically have more access to) know about a female colleague’s contributions to the project or the company as a whole.

Call out the other guys

Once you have become the master of mastering not mansplaining, keep your eyes out for offending male counterparts. When you catch a mansplainer, call him out. Confront him privately (or publicly, depending on the circumstance—no one wants a fight to break out at the agency). Also, don’t contribute to or participate in sexist behavior or comments at work. I know this is perhaps easier said than done, but it would be a huge step toward creating a more equal and fair work environment.

Easy enough, right, guys? And what can the women do? A lot.

As Joanne Lipman points out in the newly released book on corporate gender bias, That’s What She Said, “Women need to change their behavior, to act like men in order to be heard.” For example, she recommends women learn how to interrupt back.

And if we don’t, then how will our mansplaining agency friends ever improve? They will—and they must. But it may take them longer, so call those guys out, ladies. Give them a fighting chance to change, and we’ll all be better off.

@alainashearer Alaina Shearer is the founder of Together Digital and host of the You Rock podcast.