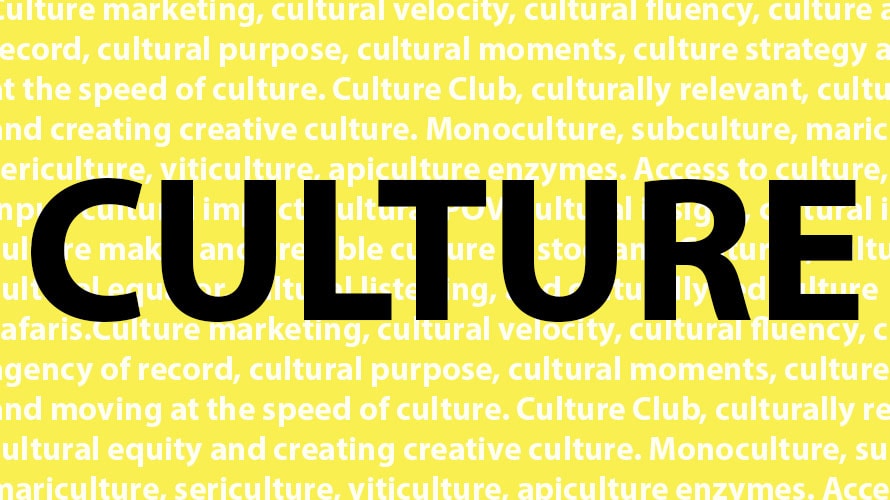 The actual meaning of "culture" deteriorated the more it got used in advertising. - Credit by Illustration: Trent Joaquin

It’s not an unusual occurrence by any stretch of the imagination: Us advertisers borrow something once sacred, generally with good intent, and end up overusing, exploiting or twisting it until it has lost its meaning and influence.

I prided myself on being a step ahead of it, free from the threat of my industry’s writhing claws, flippant ingestion and regurgitation of once-beloved words and phrases. There I was, ignorantly thinking that my fingerprints could never be found on the victims within advertising’s mass grave of appropriation.

But I was wrong. Today, the entire advertising industry is complicit.

The latest victim has been with us for countless years, serving us with resilience, agility and versatility. It seemed impervious to our threats, our skulking about, our self-serving motives. But unlike other transients who should’ve seen it coming, this one comes as a dark surprise with devastating consequences.

As traditional advertising felt the ever-increasing deteriorating effects of audiences' apathy and waning appetites for content, the entire industry turned its predatory gaze to "culture" as a potential antidote.
What once stood so tall and proud now lies lifeless at our feet, void of the purpose it once served and robbed of its royalty, like a shivering, plucked peacock. Creatives, strategists and account people alike bartered with it, bought it, sold it and swapped it. We sampled it, split it and inserted it into almost every strategy we served. And in doing so, in applying it to serve our every need, we sent it on a downward trajectory, becoming ever weaker on its way toward its inevitable demise.

As traditional advertising felt the ever-increasing deteriorating effects of audiences’ apathy and waning appetites for content, the entire industry turned its predatory gaze to “culture” as a potential antidote. Seemingly overnight, every creative agency’s landing page promised access to it, VIP passes to relevance and retention. We began to build teams around it. We taught lessons on it, launched hubs for it and inserted it into as many case studies, job descriptions and proposals as possible.

As our industry penned essays about marketing to millennials, “culture” began to simplistically refer to “the things young people care about.” Almost as if intentionally vague, its lack of clear definition gave way to a staggering degree of ubiquity. And together, we went to town on it.

In my darkest hour, I was using it more than 20 times a day. In 2016, I had to replace “C” on my keyboard three times. In late 2017, we had a cultural architect join the team, a title so unsure of itself that to question it would be admitting your own ignorance. To understand culture became an advertising skill set unto its own. Even LinkedIn added it as an endorsable professional quality.

Us advertisers can spit jargon until we’re blue in our snackability holes. As it turns out, what we say counts.
Cameron Farrelly is a former child star turned chief creative officer of Virtue, the agency born in VICE.