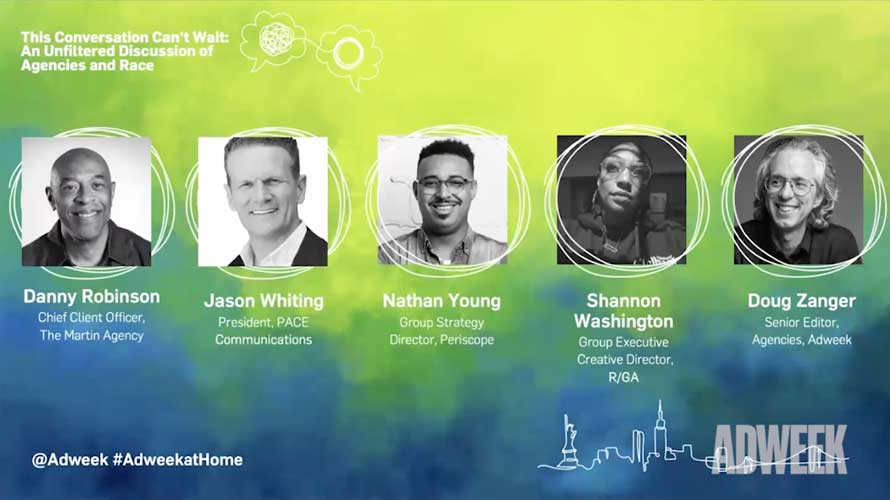 Adweek's This Conversation Can't Wait: An Unfiltered Discussion of Agencies and Race discussed how to grapple with systemic racism. - Credit by Adweek at Home

Adweek held an urgent discussion around issues of race in advertising entitled This Conversation Can’t Wait: An Unfiltered Discussion of Agencies and Race, as agencies once again grapple with issues of systemic racism and a failure to make meaningful progress on diversity and inclusion in recent years.

The letter was among the topics discussed, in addition to the launch of 600 & Rising, a nonprofit organization dedicated to the advocacy and advancement of Black advertising employees started by the letter’s signatories.

“It’s important to realize that it’s long overdue,” Washington said of the open letter. “These are things we have been asking for for so long.”

Whiting thanked Young and Bennett for the letter and said that it provided a roadmap for anyone who claimed they didn’t know how to tackle the issue.

Other topics included how long this issue has gone unresolved in advertising and the need for transparency and accountability on all fronts, from empowering diversity and inclusion leaders to holding leadership accountable to releasing agency diversity numbers externally.

“There needs to be a transparency in data and accountability in goals if you want to see any kind of shift,” Young said, adding that it was a promising development that IPG and Giant Spoon had released such EEOC statistics since the letter’s release.

Clients can also play an important role in holding agencies accountable, and many of them have already made progress on diversity and inclusion well beyond what agencies have accomplished. “Often agencies say they can’t find diverse talent, but as soon as the client says you have to have 20% diversity, we can suddenly find them,” Young said.

Recruitment and hiring diverse talent isn’t enough, however. Robinson stressed the importance of putting “a system in place that shows them the journey we expect them to take,” with a meaningful commitment to professional development and advancement opportunities. He added, “We’re losing people to brands who can show them the path forward.”

Young cited a recent survey 600 & Rising’s members conducted with the 4As, which found that what would have the biggest impact on recruiting and retaining Black talent was to have Black leadership in place.

“They literally can’t see how they would reach a certain point in their career,” he said. “Compare that with brands where there’s more diversity in leadership teams, and it’s easy to see why they leave.”