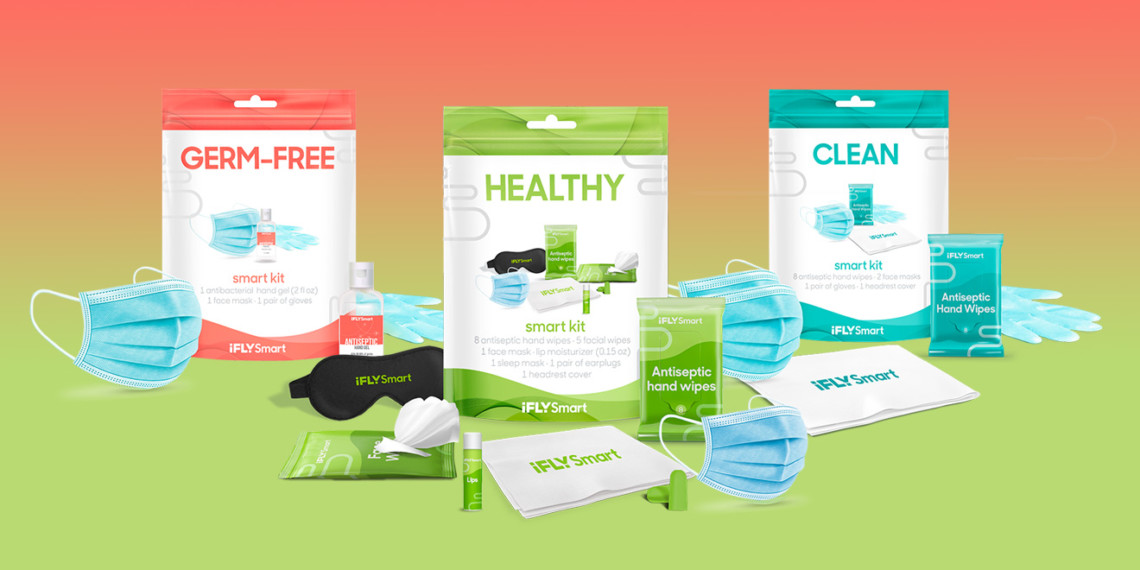 The cleaning kits come with all the antimicrobial weaponry a traveler could want. - Credit by iFly

Long before Covid-19, it was the seasonal flu that people feared, and the 2017 flu season was a bad one. According to the Centers for Disease Control and Prevention, 45 million people got sick that year, over 800,000 bad enough to be hospitalized, and 61,000 died. Of course, most Americans didn’t think about statistics like this back then—but David Rapps did.

Or try to. One day, Rapps recalled, “my cousin forgot her antiseptic wipes at home before boarding her flight,” so she flew with the germs. And then, once she’d landed, she told Rapps about the anxiety the experience had caused her. Which got Rapps thinking: “Wouldn’t it be convenient to offer health essentials like wipes and face masks in a kit?”

The idea of selling a flight survival kit complete with a face mask might have seemed like overkill to most members of the traveling public—but now that Covid-19 has rewritten most of life’s rulebook, it no longer goes.

The mission, as it were, takes the form of three kits that offer travelers the kind of germ-warfare weaponry poised to become standard equipment. These range from the $6.99 Germ-Free Smart Kit (it features hand gel, gloves and face mask) on up to the $9.95 Healthy Smart Kit, which comes with everything from antiseptic hand wipes to a headrest cover.

Rapps’ innate microbial awareness couldn’t have been better timed. While many brands have scrambled to get new products to market to deal with the realities of life during coronavirus, iFly’s original Healthy Smart Kit—which was in development for two years and meets both FDA and TSA guidelines—first hit stores in late 2019. Now, halfway through 2020, that kit has an established track record (including a four-star rating on Amazon), which explains why it nearly sold out once Covid-19 hit.

The company has already sold kits to major organizations including the New York Mets and the Visiting Nurse Service of New York. The demand prompted Rapps to add two more kits to his lineup, which are shipping out to retailers now.

“The iFly Smart Kit is well-suited for the corporate traveler as the country starts to open up again,” observed Jen Miller, who works as executive creative director of brand strategy shop Scrum50 and whose resume includes leading the U.S. digital launch of Dove’s “Real Beauty” campaign.

And even with business travel (indeed, all travel) at historic lows, Miller wagered that there’s still a need for a product like this. “While Covid-19 will have changed the way we look at business travel and many won’t require their employees hop on planes anytime soon,” she said, “those who find it a necessity will be looking for ways to keep their employees safe.”

In a Harris Poll last month, 48% of Americans vowed they wouldn’t fly until the pandemic is over—but that still leaves over half the population who will.

Rapps’ experience as a manufacturer has helped him get his kits into major retailers including Walmart, Staples, 7-Eleven, Big Lots and Walgreens. But the key distribution channel will be those everything stores you find yourself dashing into near the boarding gates to pick up that $9 bottle of water. The kits will sell at Hudson News, Paradies Lagardère and other in-terminal shops.

Covid fears have been a sales boon for most every brand that makes a disinfecting product, including a number of companies that sell specifically travel-oriented gear, from Travel Stuff 4U’s $13.99 Sanitizer Kit on up to P.Mai’s Violet Clean Kit, which uses a portable UV lamp to kill germs and, even at $128, is sold out until mid-July.

And while Rapps obviously isn’t pleased that the flying public is spooked right now, he does take issue with the cleanliness of planes.

“If you’re traveling today without antiseptic wipes and face masks, you’re taking a chance with your health even on a plane that is half full,” he said. “Airlines have promised for years that their aircrafts are clean and hygienic, but science has shown otherwise.”

He’s right. According to the World Health Organization, cabin air is pretty safe since it’s recirculated through filters that trap bacteria and viruses, but shared surfaces can be an issue. “Transmission of infection may occur between passengers who are seated in the same area of an aircraft, usually as a result of the infected individual coughing or sneezing, or by touch (direct contact or surfaces that other passengers touch),” its website reads.

A few years ago, Travelmath—which helps travelers calculate whether it’s better to fly or drive to their destination—commissioned EMLab P&K to do a swab test in various parts of commercial airliners. It found that the dirtiest places on board are, in order: the lavatory flush button, the fold-down tray, the seatbelt buckle and the overhead air-vent control. Given that you eat from the tray table, the findings there are probably the skeeziest of all: Fold-down trays exhibited a whopping 5,155 bacterial colonies per square inch. The toilet seat at home, by contrast, has only 127.

“Some of our most enthusiastic supporters,” iFly’s founder added, “are nurses and flight attendants.”