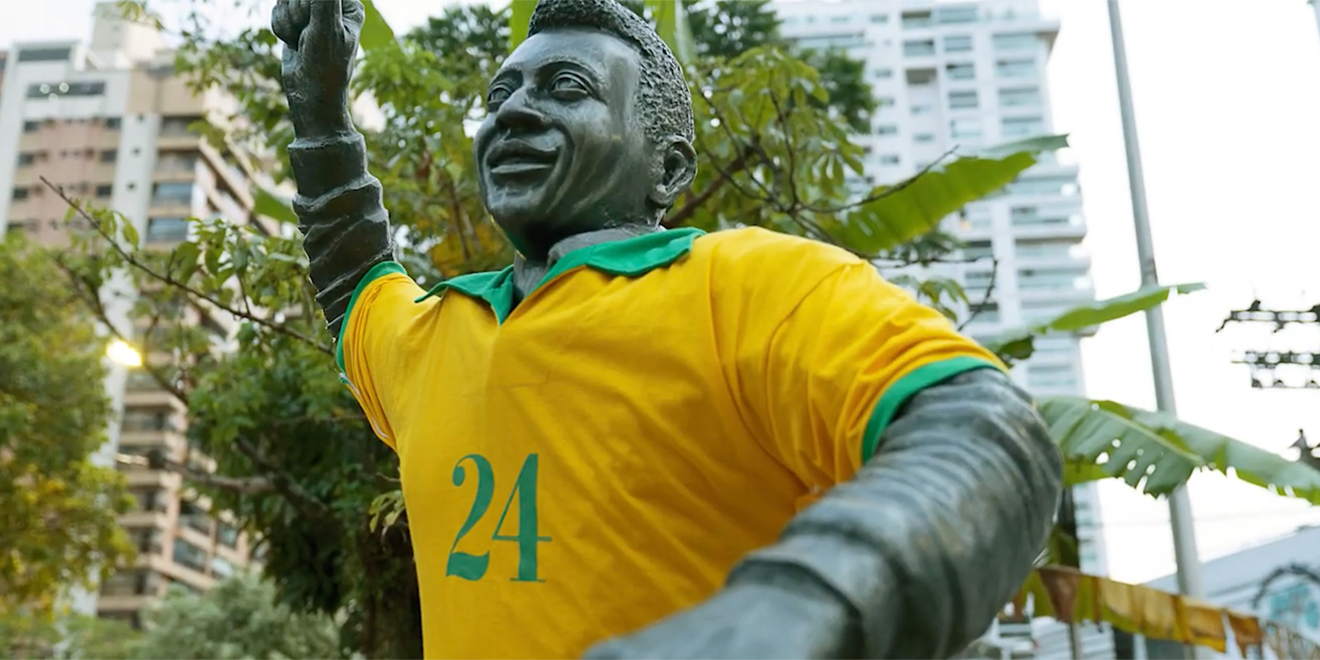 A #24 jersey adorns a Pelé statue in Brazil. AlmapBBDO

As America creates murals honoring the number 24 in memoriam of Kobe Bryant, the digit means something very different in Brazilian soccer. The number is considered the “gay” jersey, and soccer players around the country from local clubs to Campeonato Brasileiro Série A avoid wearing it.

The homophobic tradition comes from a street gambling game called Jogo do Bicho, or The Animal Game, where each number represents a different animal, with 24 as a deer, or veado in Portuguese, a word similar to a slur for gay people.

That loose similarity has been enough to see the jersey number relegated to backup goalies and lockers for decades. But a new campaign created by agency AlmapBBDO for LiGay, a soccer league for the LGBTQIA+ community, is supporting #24 by putting it on the chest of Brazil’s most revered soccer star, Pelé.

“Like anybody else, an LGBTQIA+ person can like soccer, root for their team and love the sport,” says Josué Machado, president of LiGay. “Unfortunately, many have their right to attend the stadium curtailed by a prejudiced environment. We want people to be better informed, less prejudiced, and for clubs and athletes to take the lead in the struggle for equal rights.”

While LiGay says the fight against homophobia will be a long one, attitudes across the country are indeed changing—albeit slowly. Last June, Brazil’s Supreme Court criminalized homophobic acts, a decision decried even by its far-right president Jair Bolsonaro.

In the soccer world, Esporte Club Bahia is pushing LGBTQIA+ representation forward on the pitch. In September, the club launched a campaign against homophobia and used rainbow corner flags at its arena.

After AlmapBBDO helped LiGay pull off the Pelé stunt in January, the most prominent papers in Brazil picked up the story. Soon after, #FutebolSemPreconceito (Football Without Prejudice) and #PedeA24 (Ask for 24) became popular hashtags among Brazilian soccer fans and journalists.

In the wake of the campaign, five clubs announced they would support the jersey, with Bahia leading the charge. Three of the five clubs are pushing the jersey forward as part of a sponsored deal.

“It’s incredible to see an initiative like #FutebolSemPreconceito having an impact and inspiring other initiatives dedicated to diversity on the pitch,” said Luiz Sanches, CCO and chairman of AlmapBBDO. “When we work together, results are quick to come. Soccer and society have everything to gain.”