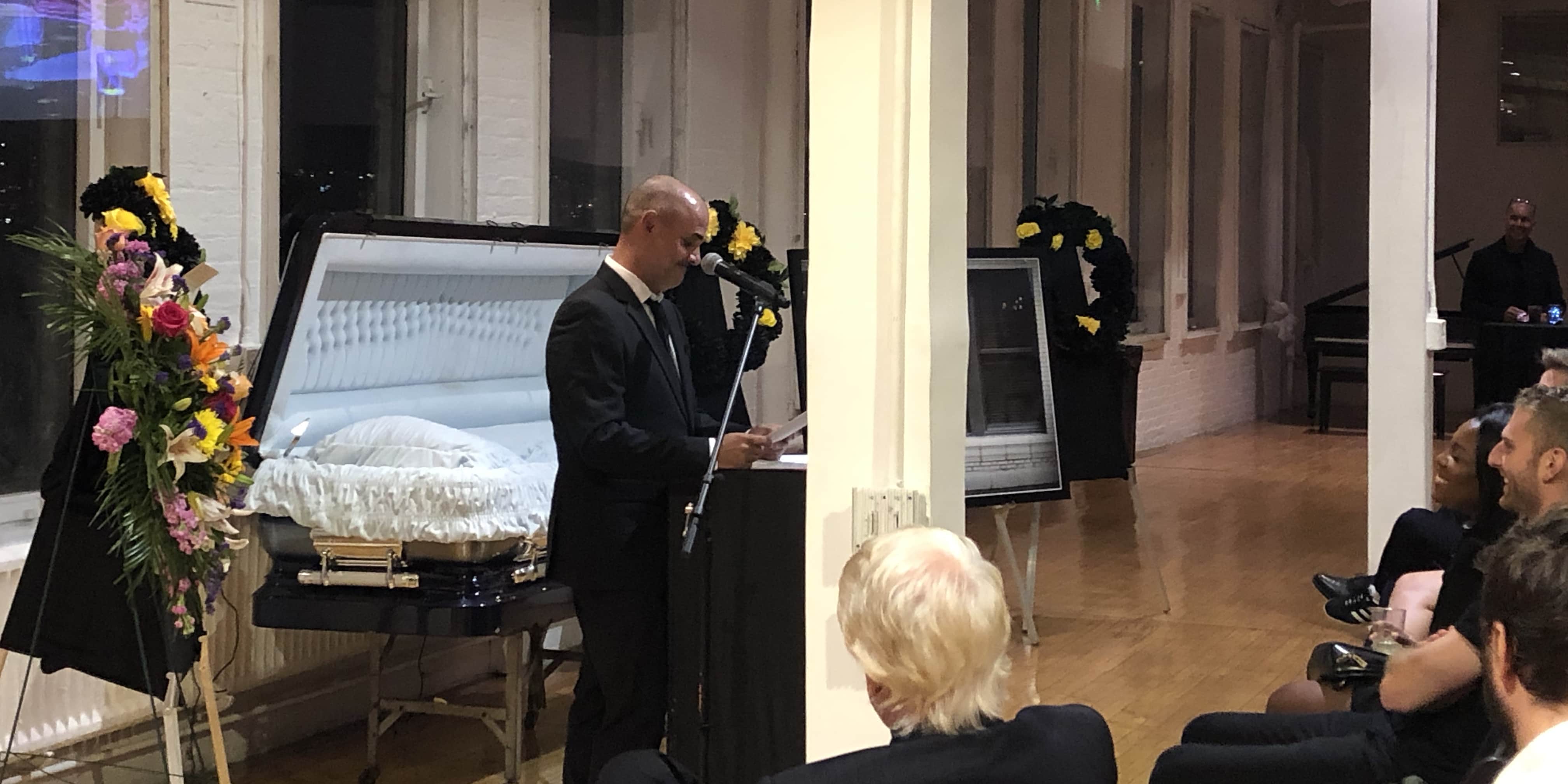 Gerry Graf addresses former Barton F. Graf staffers and supporters at a faux funeral for the agency he founded. - Credit by Adweek

A New Orleans-style marching band played a frenetic swan song around an open coffin—containing only a dead rat—as Barton F. Graf mourned its closure at a send-off event Thursday befitting of the agency’s oddball reputation.

Dozens of former staffers and friends of the agency attended the mock funeral, held in a lower Manhattan event space, where they spent an emotional evening trading their wildest memories from the creative shop’s nine-year run.

“I’m feeling really sad and really happy at the same time,” Barton F. Graf founder and chief creative officer Gerry Graf told Adweek with tears in his eyes. “We’re supposed to be making fun of a funeral, but there’s still all the emotions. You know, we’re making this joke here, putting a dead rat in the coffin, and I’m laughing my ass off, and then I remember why we’re doing it—because we’re closing—and I tumble down the other side.”

"You know, we're making this joke here, putting a dead rat in the coffin, and I'm laughing my ass off, and then I remember why we're doing it—because we're closing—and I tumble down the other side."
Gerry Graf, founder, Barton F. Graf
The New York agency first announced its closure in early August, a victim of the shaky economics independent creative agencies face as brands move from agency-of-record relationships to project-based or in-house work. The agency leaves behind a legacy of widely admired eccentricity that lives on in agencies founded by its alumni–one speaker at the event compared it to Velvet Underground, a band most remembered for its game-changing influence on more popular bands, citing an Adweek podcast discussion of the agency’s closure. 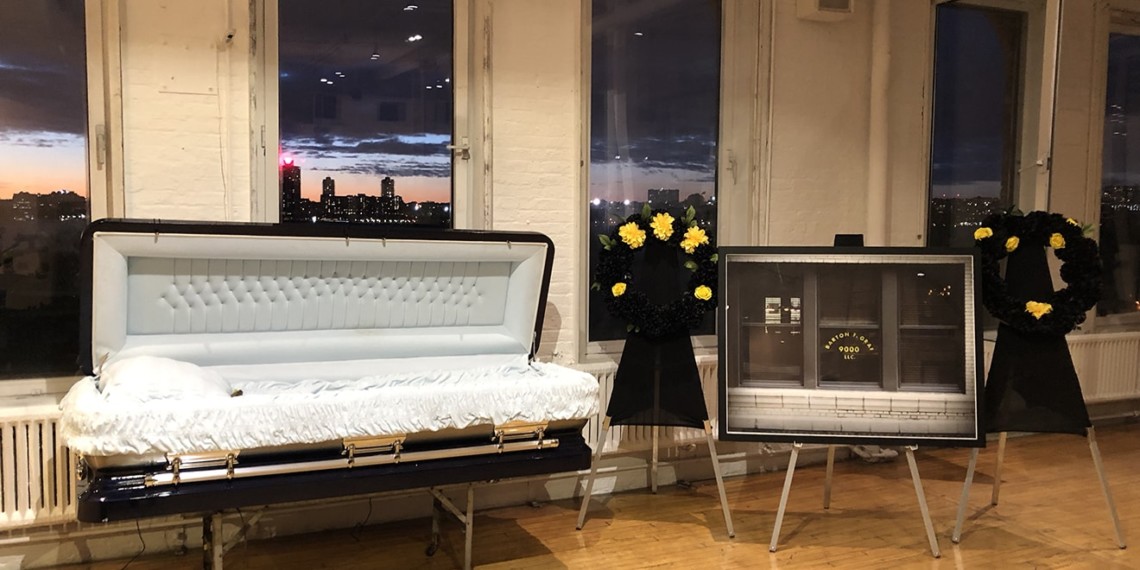 A coffin containing a dead rat.
Adweek
The service opened with a meandering monologue from a “priest” played by a professional party entertainer that referenced highlights, anecdotes and inside jokes from the agency’s history, including a darkly funny political ad that blamed climate change-denying Republican politicians for increasingly disastrous storms, a bid to rally the ad industry around saving the Affordable Care Act and a GoDaddy Super Bowl spot that had to be pulled a week before the game after backlash around its seemingly referencing puppy mills.

“There is a time for everything,” actor Brandon Armstrong said. “A time to say Hurricane Rick Perry is killing dogs, a time to answer a phone call from the Obama office saying, ‘Good job.’ A time to do a Super Bowl spot on a lost puppy, and a time to answer angry phone calls from grandmothers who wanted you dead.”

“Barton F. Graf was conceived on the back of a cocktail napkin, like all of Gerry’s children—he literally just wrote down a word on a napkin and was like, ‘That shit’s pretty good’—and he did that laugh he does when he really likes something, like ‘Ha!'” Ianno said. “Over the nine years, he called out a bunch of weirdos and degenerates and snarky assholes—I’m talking about you guys who are making fun of me right now.”

Creatives reflected on day-to-day life at the agency and aired a few good-natured grievances. “You’d sit there and you’d goof off and you’d write something hilarious, and then you can sit next to the man himself and have him look you in the face and say, ‘I think it’s OK,'” said Barton F. Graf creative director Kasia Canning. 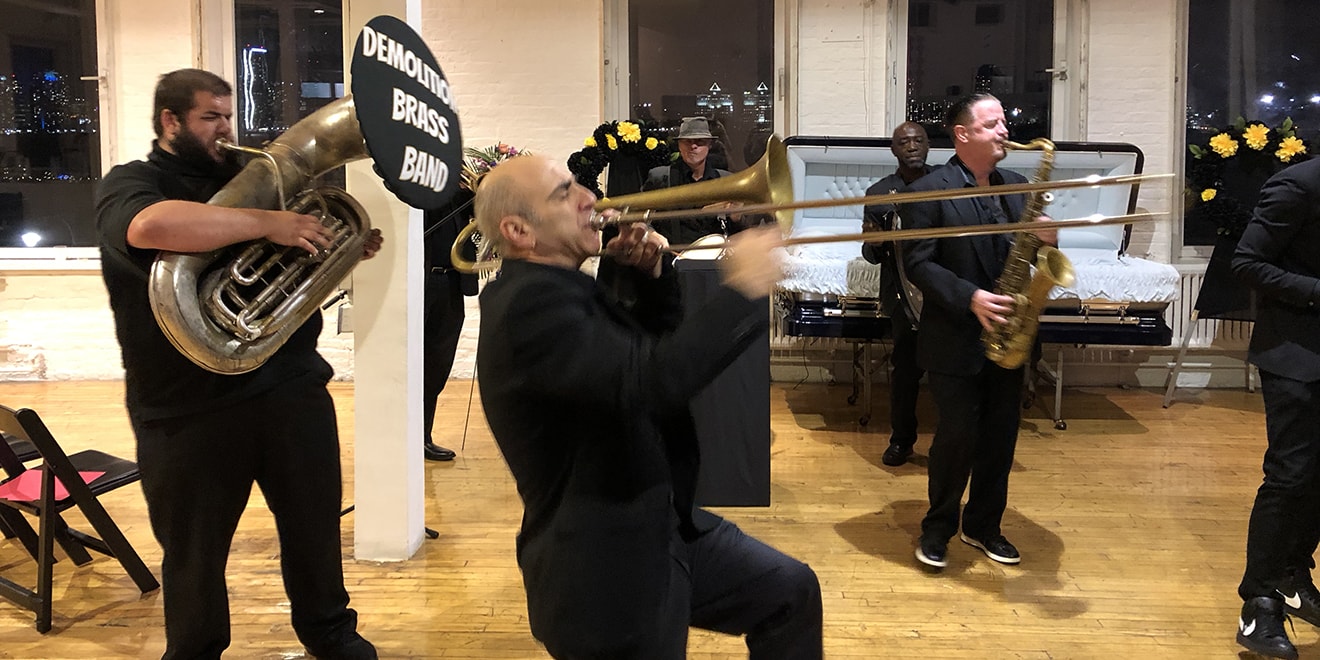 The Demolition Brass Band
Adweek
The eulogies concluded with a close reading of the song “Neon Pegasus” by Parry Gripp led by Graf, followed by a minutes-long standing ovation. The musicians, Demolition Brass Band, made a few final laps around the room, and a man dressed as Abraham Lincoln wandered in as the less structured portion of the night’s reminiscences kicked off over drinks.

“It was my first job out of Brandcenter, and every job I’ve been at since, I compare to BFG,” said Chase Kimball, a copywriter at Graf from 2014 to 2015 who is now at Droga5. “It felt like a sandbox to play in.”

Despite all the real sentimentality, the night’s madcap festivities remained true to the agency’s unfailing sense of self-deprecating humor.

“If you’ve ever been to Wieden + Kennedy in Portland, in the lobby there is a floor-to-ceiling gorilla that says, ‘Fail harder,'” Gerry Graf said towards the end of his final eulogy. “Anybody who knows Dan Wieden can ask him if I’ve failed hard enough.”