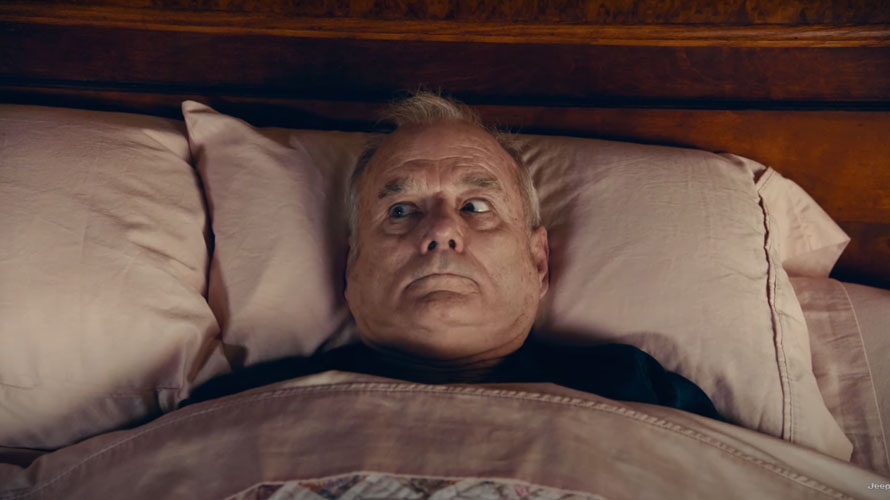 Bill Murray's first and only national commercial lives on. - Credit by Jeep

Actor Bill Murray returns today in a familiar role in series of vignettes on Jeep’s social channels as the brand encourages consumers to stay off the road as the days are beginning to blend together.

“We understand that every day is starting to seem the same,” begins one video as an alarm clock strikes 6:00 a.m. Sonny and Cher begin singing, “I Got You Babe,” and Murray wakes up once more in a Punxsutawney, Pa. bed and breakfast.

Jeep
The series of short videos are part of an overarching campaign, #StayAtHome, from parent company Fiat Chrysler Automobiles (FCA) to encourage consumers to do what they need to do to stay healthy. And, for Jeep specifically, the message to consumers is the trails will be waiting when the pandemic is over. The videos end with the hashtag #StayOffTheRoad.

Three videos will roll out on social through the month of April.

The campaign follows the brand’s wildly successful Super Bowl commercial, which topped both Adweek’s list of the 10 Best Super Bowl Ads of 2020 and USA Today’s annual Ad Meter. Jeep was the only advertiser to capitalize on the fact that the Super Bowl coincided with Groundhog Day this year by tapping Murray to relive his role as self-centered Pittsburgh weatherman Phil Connors, who, in turn, relives the same day in the 1993 movie Groundhog Day. (Poppy the groundhog, who made her big screen debut in the ad, is back as well.)

At the time, Olivier Francois, chief marketing officer of Jeep parent Fiat Chrysler Automobiles (FCA), had to give a handwritten letter to mutual friends and organize a last-minute shoot in Woodstock, Ill. to pull things off. It marked Murray’s first national commercial—and, in a press release, Murray said it would be his last.

But, in the end, that isn’t quite true.

Francois said some divine intervention came into play again as the brand saw consumers comparing sheltering in place to Groundhog Day because it’s hard to tell what day it is anymore. That’s when Jeep reached out to the notoriously elusive Murray again, who, Francois pointed out, is much easier to find these days because he’s home.

The Super Bowl spot featured a moment in which Murray tapped Poppy’s bike helmet and said, “Safety first!” Francois said Murray was the one who realized they could repurpose it for the current moment. The team had to use existing footage because they couldn’t shoot anything new, which Francois said is “great because it forces you to be even more creative.”

Calling Murray the creative engine behind the new spots, Francois noted it’s “difficult to go funny or comedic in times like this and the beauty of Bill and Groundhog Day [is] this execution is the very rare if not unique way to do something that’s really funny and comic relief is welcome now.” But, he added, “It is tasteful.”

Other FCA brands, including Ram, Dodge and Alfa Romeo, will have their own hashtags and videos under the #StayAtHome umbrella, but catered to their individual audiences on Facebook, Instagram and Twitter.

Francois said the goal is to inspire people to stay home “because it’s obviously something that is instinctive. It’s not something we like to do.”

And so while FCA is “singing with the choir” by joining the brands telling consumers to stay home, Francois said it also strives to say something a little more meaningful and, of course, to connect consumers.