It took 128 people to complete the 2-month-long project 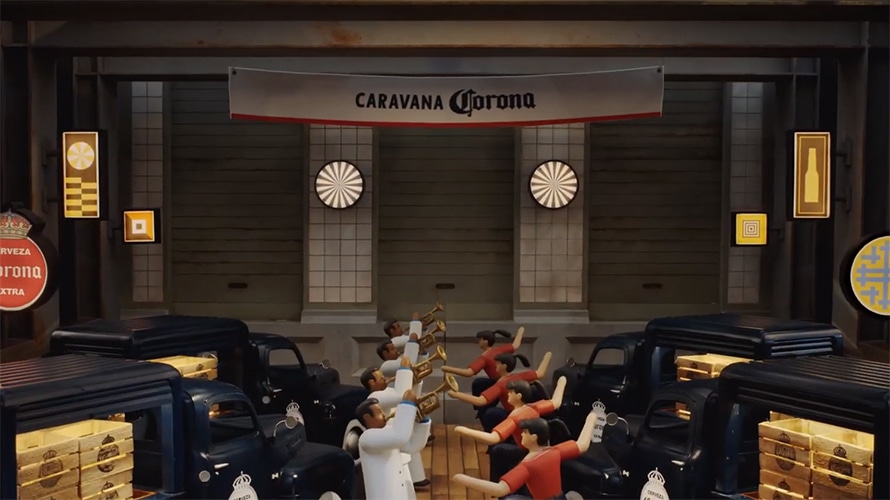 Corona honors its Mexican heritage through a meticulous stop-motion animation film that enlisted the help of Andy Gent, the former head of the puppets department on Wes Anderson’s Isle of Dogs.

“The History of ‘La Cerveza Más Fina,'” a 60-second ad for the Mexican market narrated by Gael García Bernal and created by Los Angeles agency Observatory, takes audiences through four chapters of the rise of Corona and how it correlates to Mexico’s own trials and tribulations since the brand’s beginnings in 1925, five years after the end of the decade-long Mexican Revolution.

From the Corona Caravan bringing beer and culture to the country during the golden age of Mexican cinema to the 1980s when the company initiated an ambitious global export plan to combat the country’s economic crisis, the effort beautifully details how the brand and Mexico have progressed hand-in-hand.

The campaign was inspired by the “La Cerveza Mas Fina” label found on every Corona bottle. The sets and imagery were created by renowned Mexican surrealist artist Pedro Friedeberg, whose iconic Hand Chair is the seat where García Bernal is perched to start the narration of the ad. Friedeberg’s distinct patterns and vanishing points are incorporated throughout the film in recognition of Mexico’s vibrant art history.

“La Mas Fina means quality and craft,” said Clarissa Pantoja, director of Corona, “so everything we did in our campaign had to have the same craft as our beer.”

The film, directed by Nicolas Ménard and produced and animated by London and L.A.-based Nexus studios, took 24 images per second to give it the life and movement viewers see in the completed version.

It is comprised of eight miniature sets, 421 handmade figures (of which 71 were used in the completed ad) and 350 replicas of Corona’s signature glass bottle that were produced, painted and filled with agave syrup to mirror the golden-colored beer. The characters were all modeled in 3D, printed and then hand-painted by Gent’s team at Arch Model Studios, which was also behind the stop-motion animation in Isle of Dogs as well as Tim Burton’s Corpse Bride, The Grand Budapest Hotel and other acclaimed films.

The creation of the ad took 128 people nearly two months to complete. Production, filming and post-production required an international collaboration of 83 people. There were 30 people in the art department who built the physical models and 17 people worked on the design in-house at Nexus.

The music is an original score by Bridget Samuels and played by a London orchestra comprised of more than 50 musicians.

“Corona’s story is a tale that reflects the spirit of the Mexican people,” said Todd Hunter, Observatory co-chief creative officer. “To tell it, we were inspired by a medium that has captured Mexican history for centuries—its art—and brought it to life through a beautiful stop-motion film.”

Here’s a behind-the-scenes look at the creation of the ad: