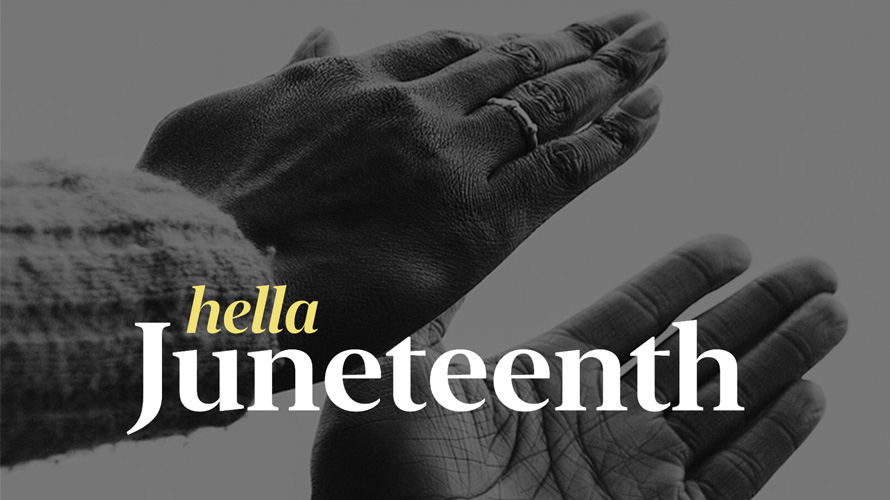 - Credit by We Are Hella Creative

Despite its immense historical significance, Juneteenth—the day Union soldiers arrived Galveston, Texas in 1865 and the nation’s last enslaved people were read the Emancipation Proclamation and learned of their freedom—is not a national holiday. A group of Bay Area creatives is working to change that.

Earlier this year, Miles Dotson, Quinnton Harris and Brian Watson came together to form HellaCreative as a way to foster and build community amid the coronavirus pandemic. Around two weeks ago, the group was reflecting on all the trauma in the wake of the racism-fueled killings of Ahmaud Arbery, George Floyd, Breonna Taylor and others.

“We were unearthing these feelings and we thought, ‘Why don’t we try to reclaim some of our joy and why we got together in the first place?'” Harris said.

The started asking why Juneteenth wasn’t celebrated nationwide, which became the genesis for the HellaJuneteenth project. “We decided we were going to put a flag in the ground, take off that day and try to reclaim our Black joy,” Harris said, adding, “The #HellaJuneteenth project was about how do we move forward from the conversation of trauma and rediscover the joy that has always been with us in our culture.”

Harris got to work creating a manifesto using Instagram graphics, and the project grew from there. Within days, they had also launched a website to share those tools. The initial focus was on providing resources for people to request the day off from work and facilitating ways to celebrate, including expanding Juneteenth into a seven-day celebration.

“It became apparent that we needed to make tools for companies to participate in the conversation and have empathy for all types of folks,” Harris explained, with the group growing from a small team to over 20 volunteers in the process.

In addition to templates for messages to representatives, employee requests and OOH messages, the #HellaJuneteenth website includes everything from educational resources to promoted events, ways to invest into the Black community and suggestions for hosting a Juneteenth celebration.

The latter, of course, is a bit complicated by the pandemic.

“We were very conscious about recommending activities that were safe,” Harris said. “Having a socially distant experience is within reach.”

One key component of the project is a running list of companies that have committed to observing Juneteenth as a holiday, a development that came about after Publicis Sapient chief experience officer John Maeda asked what they were doing to get companies to join the movement. While the project “caught fire” from the start, Harris explained it “blew all the way up” when Twitter CEO Jack Dorsey retweeted a link to its resources.

Explore the "Gallery" view on Airtable.

The list of companies includes a number of agencies in the advertising community, including Harris’ own employer, Publicis Sapient, as well as holding companies IPG and Omnicom and agencies including FCB, Huge, Ogilvy and R/GA.

Harris said he viewed the list as just a first step.

“We’re strategic in how we think about things,” he said. “We’ve got your name now, you’ve put yourself out there. Now, how do we hold you accountable in the future?

“The next iteration is pressure. I don’t know how that looks exactly, but I look forward to making sure that these companies never forget that they made this statement,” he added.

Ultimately, Harris thinks a growing list of business interests can pressure the federal government to recognize Juneteenth as a national holiday.

“I’m extremely hopeful that we’ll see Juneteenth become a national holiday in our lifetime,” Harris said. “We speak in dollars first and foremost. Having the momentum from all these companies signing on to observing this [holiday] and making sure they’re observing it in perpetuity will give momentum for change.”

Harris is gratified by the swell of enthusiasm for Juneteenth and eager to see how people choose to celebrate.

“I’m really excited to see what comes out of social media,” he said. “Someone asked us what will be the visual marker for Juneteenth. I smirkingly said, ‘We’ll see what Black Twitter tells us.'”

There’s already a good deal of momentum behind recognizing Juneteenth as a national holiday.