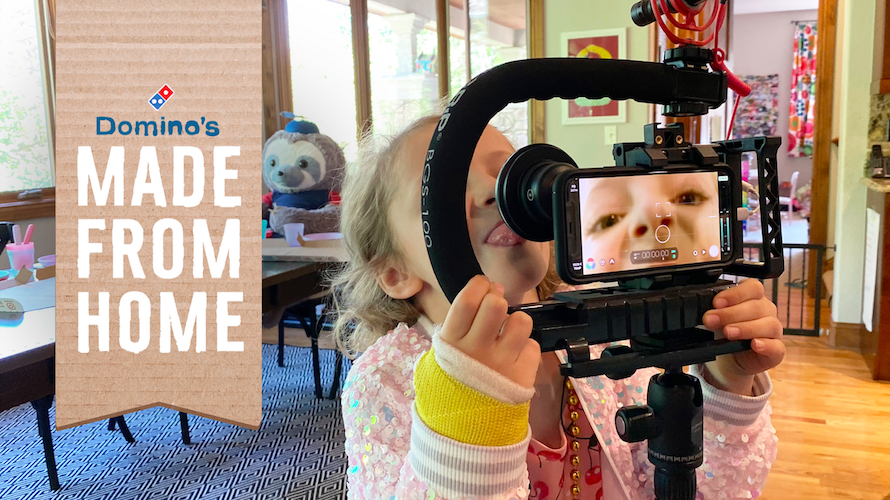 Spot features the three children of the creative director and runs until August. - Credit by D’Arcy O’Neil / Domino's

Nobody in this industry can deny the importance of building connections and getting a bit of work experience early in one’s career. After all, advertising is a super competitive job, and it pays to know the right people when starting out.

D’Arcy O’Neill, creative director at CPB, seems to have taken that advice literally by giving his three young daughters their first taste of creative direction by having them star in a Domino’s ad.

"At the end of the day the kids were all beat, gave me a big hug and said, 'Dad, we didn’t know making commercials was so hard.'"
D’Arcy O’Neill, creative director, CPB
The 30-second TV spot, which was filmed at his home on an iPhone and promotes the pizza brand’s latest family deals, features 12-year-old Lilly, 10-year-old Charlotte and 7-year-old Audrey.

With access to the usual suite of resources limited by the coronavirus pandemic, the team had just five days to prepare and shoot the ad, which will run until the end of August, with a skeleton crew.

And while the complicated props were built primarily by the crew, the kids helped out with the design and even had a hand in selecting wardrobe, hair and makeup.

“The kids were so happy to finally see how a commercial was made after many years of begging me to take them to a shoot. Audrey even spotted two continuity issues early in the day, which was a great start,” O’Neill told Adweek.

“Overall, they were all so excited and easy to work with … at the beginning. Lilly and Charlotte were pros all day, but Audrey, the youngest, definitely lost patience with our team. She wanted the director to be ready faster, as she was ready. She kept it polite but was also asking, ‘Are we ready???'”

“At the end of the day the kids were all beat, gave me a big hug and said, ‘Dad, we didn’t know making commercials was so hard.'”

Shooting with limited time and resources has taught the team “a ton,” O’Neill added. “We discovered many hidden talents in our team members that don’t get to be flexed during normal circumstances.

“On this shoot, people pushed their normal day-to-day jobs, as we were all suddenly art department, food stylists, directors and DPs.”