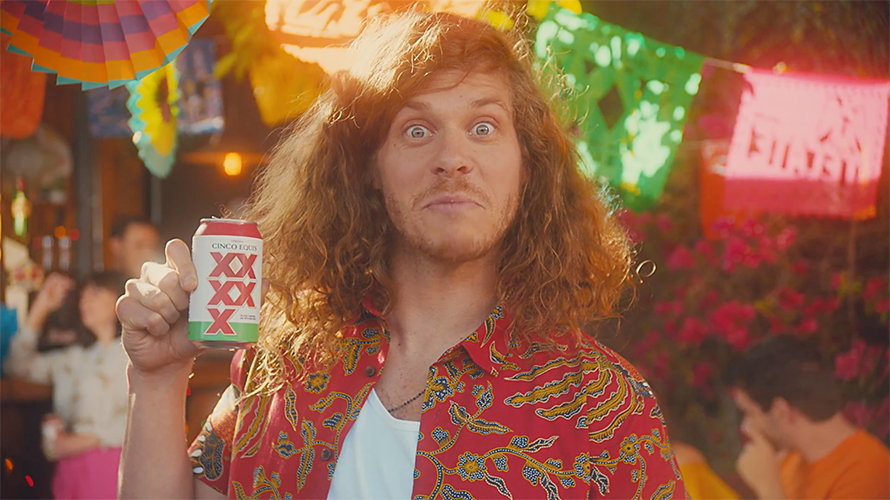 Dos Equis has consistently released advertising around the Cinco de Mayo holiday, and this year they’re extending the practice to its packaging, with a limited-edition Cinco Equis can available in select stores in New York and Texas.

The brand and its agency of record, Droga5, partnered with Funny or Die and comedian/actor Blake Anderson (known for roles in Workaholics and Game Over, Man!) for a pair of ads promoting Dos Equis, which trade in intentionally over-the-top humor.

The longer of the two spots centers around a goofy Cinco Equis theme song, informing viewers that it’s the “the same beer, but with more equis pulled from the equis mines of Alaska.” In case you’re struggling with the math, that adds up to “cinco more equis than any other beer.”

The ad ends with Anderson’s profanity-laced exaggerated anger over someone drinking a different type of beer.

Other spots riff off similar themes, with tongue-in-cheek references to the amount of equis and Anderson’s apparent disdain for any other beer. While clearly intended to be over-the-top self-parody, some viewers may take issue with the ads’ approach of turning Cinco de Mayo into a punchline and others may find Anderson’s violent outbursts a bit too much to swallow.

“There are a lot of Americans who can’t tell you the history of Cinco de Mayo, but they certainly can tell you an interesante story about celebrating it,” Dos Equis senior brand director Quinn Kilbury said in a statement. “We created Cinco Equis because Americans are always seeking a reason to celebrate, and literally all we had to do was add three Xs.”

The ads are part of Droga5’s larger “Mas Interesante” campaign, which the agency rolled out last month as the brand’s first major campaign since moving its creative account from longtime agency Havas to Droga5 without a review last year.

Last year Dos Equis launched a Cinco de Mayo spot starring Augustin Legrand as the new version of “Most Interesting Man” character, in which Legrand “Spices Things Up” with a chili-eating contest, following Jonathan Goldsmith’s sendoff in 2016. Legrand didn’t last long, as Droga5 moved on from the character while continuing to nod to the brand’s past with the “Keep it Interestante” tagline.

Goldsmith, meanwhile, has moved on to the harder stuff. The actor has starred in a series of ads for Astral Tequila from Erich & Kallman, playing a role not all that dissimilar from that of his previous character, referencing the role in his debut ad for Astral with the line, “I told you I don’t always drink beer.”