The effort involves media outlets from around the world. - Credit by Droga5

You’ve heard this story before: our increasingly complex and conflict-ridden world has only heightened the importance of a free press to report on breaking news and interpret international events.

In order to highlight these issues on World Press Freedom Day, The United Nations Educational, Scientific and Cultural Organisation (UNESCO) has partnered with The New York Times, along with other top international publications and broadcasters, to encourage readers and viewers everywhere to support free, independent media outlets … especially those they might not consume on a regular basis.

The campaign, created by NYT’s lead agency Droga5, centers on a series of full-page print ads in which participating media organizations encourage readers to consume the work of their competitors.

“Read more. Listen more. Understand more. It all starts with a free press​,” the tagline reads. 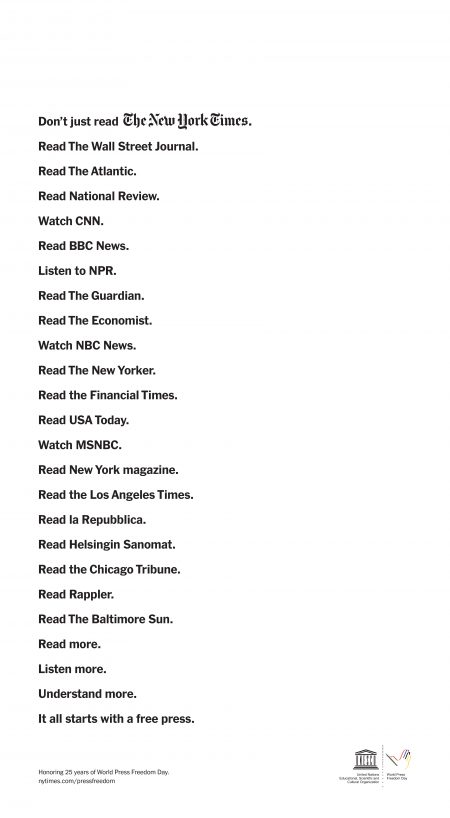 This multimedia effort also includes a video promo set to run on MSNBC and digital placements on several prominent publishers’ home pages in addition to a variety of out-of-home work promoting the project’s partners, which range from NPR and BBC News to Italy’s la Repubblica and Rappler of Indonesia.
The work is particularly relevant as news organizations around the world face new waves of crackdowns from autocratic leaders along with the inherent risks of covering armed conflict. On Monday alone, nine journalists were killed by a suicide bomber in Kabul, Afghanistan.

At the same time, partisan battles over “fake news” and the increasing proliferation of misinformation on social media led a majority of reporters polled in a recent Cision survey to say that they are concerned about a lack of trust in media institutions.

One significant and encouraging caveat: an increased demand for journalistic accountability has also increased public confidence in those same institutions, based on numbers from last year’s version of the poll. 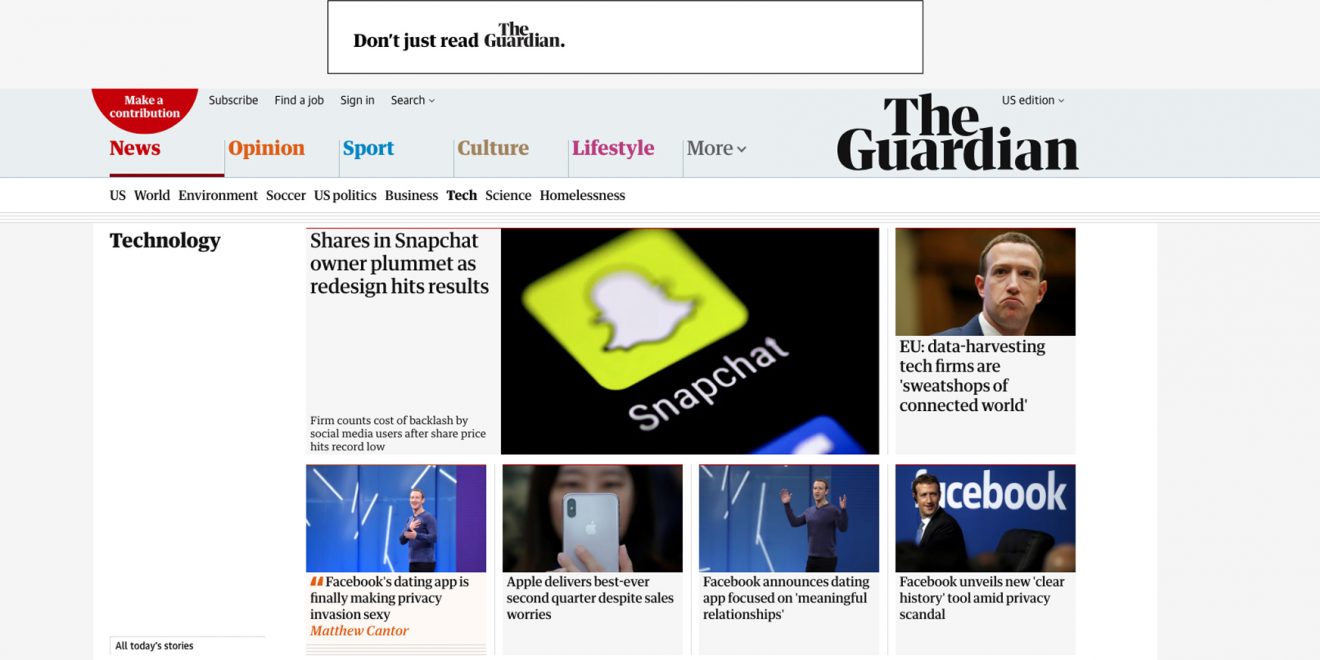 “We are delighted to see a broad coalition of media organizations coming together in support of World Press Freedom Day, as we strongly believe the press should be at the heart of this celebration,” said Guy Berger, director for Freedom of Expression and Media Development at UNESCO, regarding the campaign.

“It’s inspiring to see this common effort to promote the fundamentals of press freedom at a time when we need it most. We much appreciate Droga5’s initiative to make this happen.” 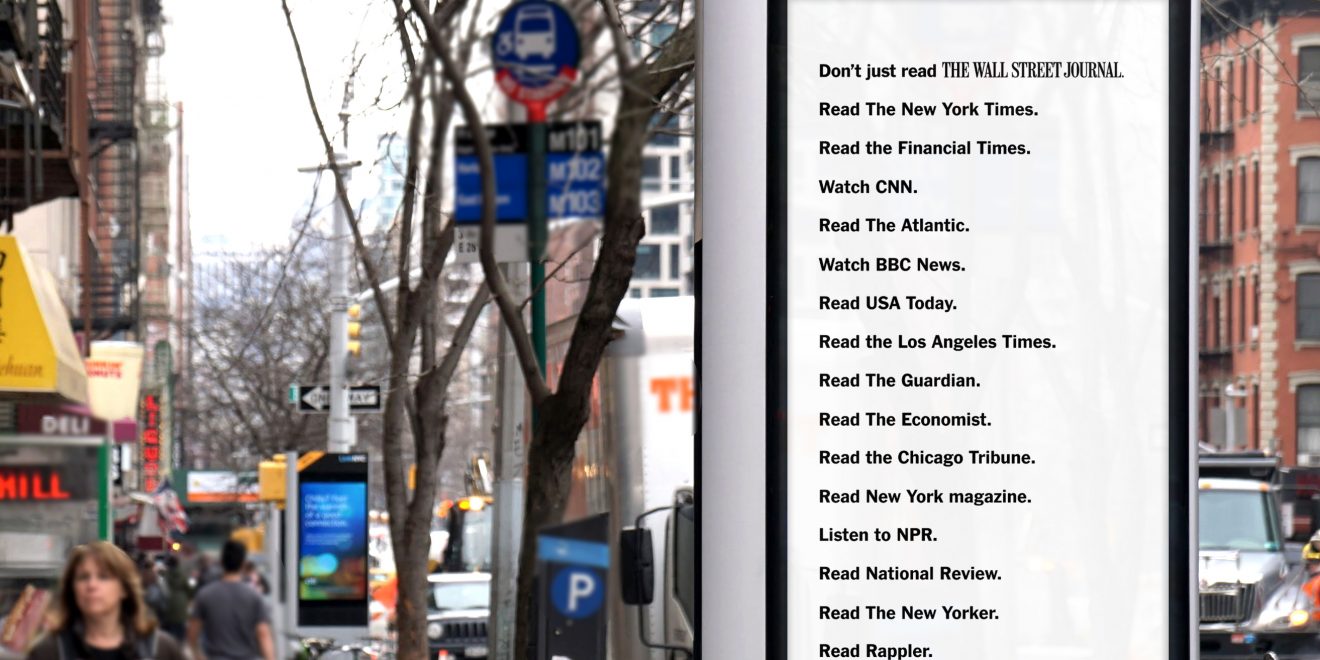 Agency founder and creative chairman David Droga added, “This campaign shows the power and promise of creativity and the role it can play in helping people understand the importance of press freedom. We are honored to have had the opportunity to partner with incredible organizations in support of this initiative.” 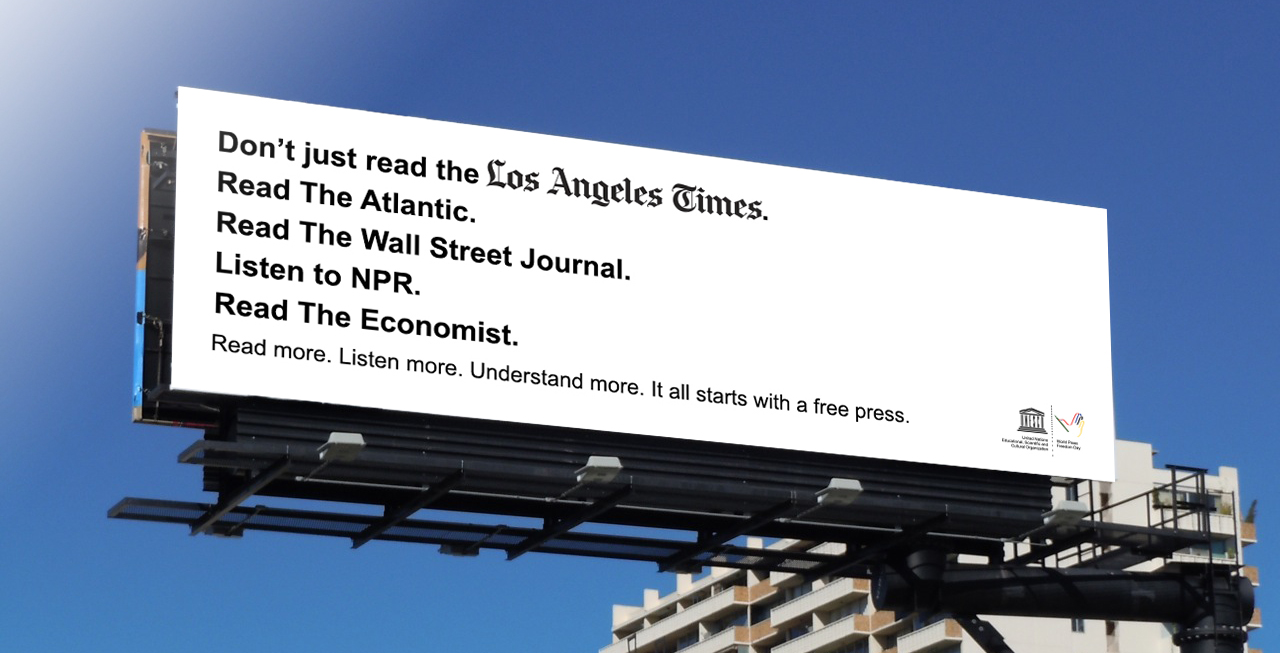 In a related Medium post, New York Times executive vice president and COO Meredith Kopit Levien wrote, “A challenge of this magnitude doesn’t have one easy fix. But here’s something that can help: More people spending more time with quality journalism.”

The exhaustive effort also includes a website featuring each media partner as well as a social media component under the #ReadMoreListenMore hashtag.

To honor 25 years of #WorldPressFreedomDay, we’re encouraging our listeners to read other news publications as well as ours #ReadMoreListenMore https://t.co/9dHSnwf79K pic.twitter.com/uPS8NEiUH0

The UN General Assembly established World Press Freedom Day in 1993 as “an occasion to inform citizens of violations of press freedom” and the fact that, in many parts of the world today, journalists regularly risk being harassed, censored, imprisoned and even murdered.

Each year, the $45,000 UNESCO/Guillermo Cano World Press Freedom Prize goes to an individual, organization or institution that “has made an outstanding contribution to the defence and/or promotion of press freedom anywhere in the world.” The prize is named for a Colombian newspaper editor who was murdered by that country’s drug cartel in 1986.

Given the increasingly polarized political climate in the U.S. and elsewhere, some readers may be primed to critique a perceived lack of ideological diversity in this campaign.

While longtime conservative editorial publication National Review did merit a spot on the list, the inclusion of both CNN and MSNBC highlights the absence of another major cable network: Fox News.

This fact only indicates, yet again, that the fight over what Levien calls “a free, independent, enduring press” shows no sign of letting up.