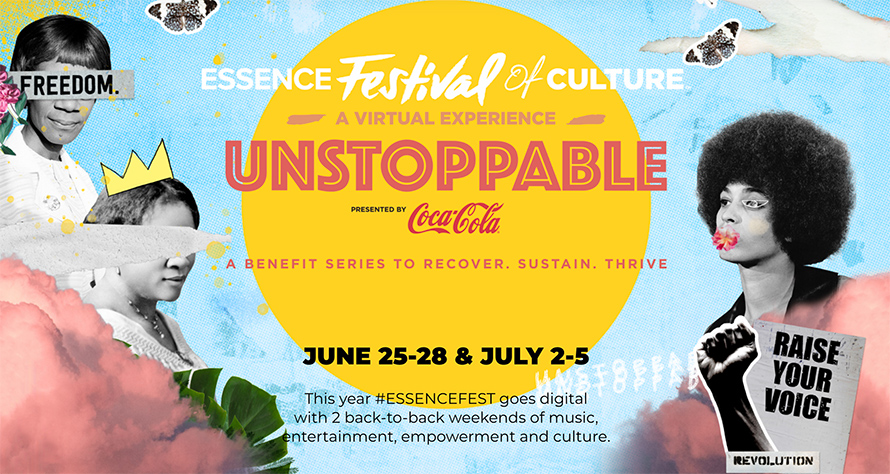 When the Covid-19 pandemic forced Essence to cancel its 50th in-person festival in April, the media, tech and commerce company quickly pivoted to produce an all-virtual experience to engage consumers during a time they’d normally be in the Big Easy.

The Essence Festival typically draws more than 500,000 people and makes a $300 million economic impact in New Orleans every July 4 weekend, making it one of the largest annual events for Black women. Essence held its first Essence Festival of Culture: Unstoppable Virtual Experience Presented by Coca-Cola on June 25-28 and July 2-5. The festival, which was free with an RSVP, streamed musical performances, business panels, wellness tutorials and more on Essence Studios, the brand’s digital content hub instead of a live event. 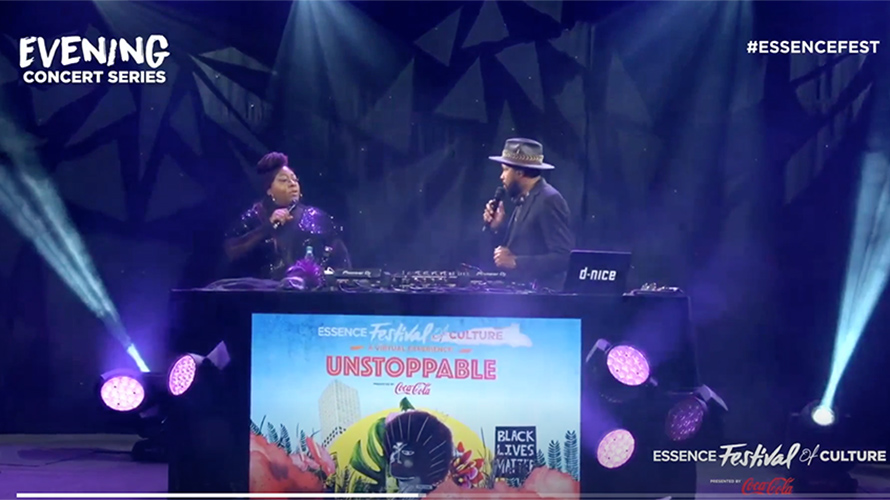 Loni Love hosted the event's Saturday evening concert series with D-Nice.
Essence
“This was certainly not the year we planned for the 2020 Essence Festival of Culture, but challenging times call for innovative measures,” said Richelieu Dennis, founder and chair of parent company Essence Ventures, in a statement. “As we began to see the disproportionate impact of Covid-19 on our community, it became more important to us than ever to still create a festival experience that delivered the community, love, laughter, fun and empowerment that the festival is known for—and to leave our audience feeling inspired and uplifted, especially during these times.”

Essence’s in-house team worked with Los Angeles-based agency Quantasy + Associates to program and produce the experience in about two months. Quantasy built a virtual event platform in-house to host the event, which Essence had previously used for a wellness summit and an entrepreneurship summit in the spring. 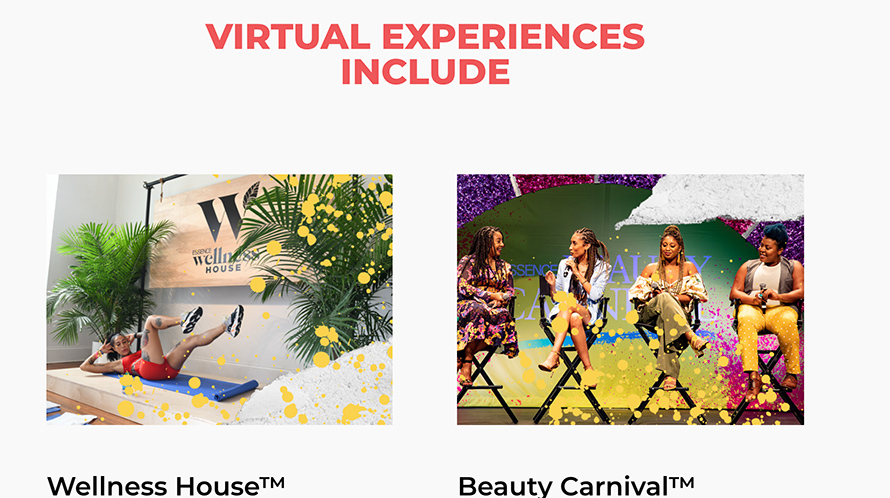 The program included wellness and beauty events.
Essence
Will Campbell, co-founder and CEO of Quantasy, said the brand’s objective wasn’t to replicate the festival virtually but to instead create an entirely new experience for online.

“We wanted to bring in the range of offerings, from music to motivation to entrepreneurship, along with live performances and talks. We scheduled the program to have things happening each night,” he said. “Even though the content is now archived, it rolled out in moments so you could experience it in real time as a community.”

Campbell said content was presented live and prerecorded. Along with a concert series, additional events included a Beauty Carnival, which had live tutorials and makeup tips from pros, the Wellness House with meditation sessions and workouts and Wealth and Power panels focused on personal finance and entrepreneurship.

Building a speaker and music lineup

Campbell said Essence worked with outside production companies to execute the concert series, which ranged from remote stage performances to a variety of at-home performances, the new norm during the pandemic. Essence also packaged a music video of artists around the world singing a rendition of “O-o-h Child” by The Five Stairsteps.

Essence kept its mainstay sponsors for the virtual fest, which include Coca-Cola, McDonald’s, Walmart, Ford and AT&T. Campbell said Essence wanted their integration to be as interactive as possible.

“We created these integrated ‘canvases’ that allowed for custom interactions,” he said. “Sponsors created polls, chats, discount codes for merch and virtual gift bags with products you’d normally get at a physical event.” 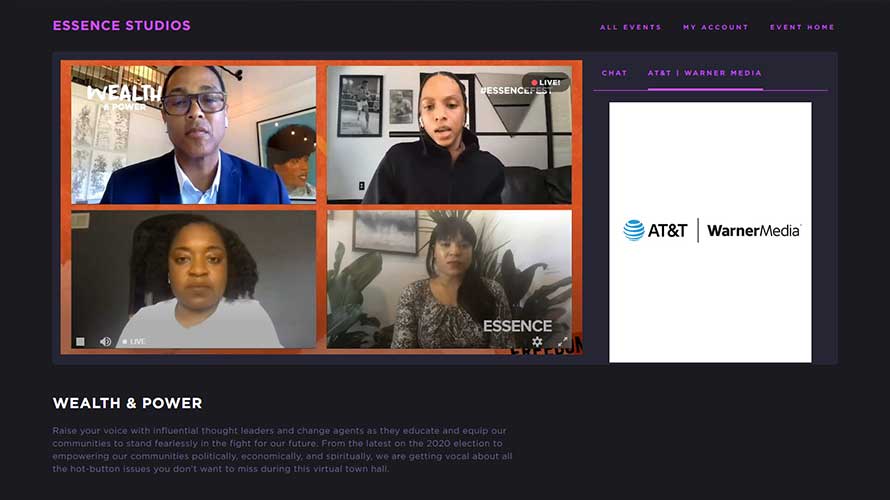 AT&T and WarnerMedia sponsored a Wealth & Power panel.
Essence
The pandemic, conversation around racism in America and upcoming elections also influenced the event’s interactive components. Essence created a #BlackVotesMatter365 voting hub, which offered attendees access to resources for amplifying their voices in local and national elections. Essence also timed the festival kickoff with a benefit initiative, raising funds to support the needs of Black-owned small businesses and organizations fighting for racial equity across the U.S.

Similar to many canceled festivals this year, Essence plans to return with an in-person event in 2021. What form Essence Festival will take remains to be seen, but Campbell said the virtual space will probably influence many events in 2020 and beyond.

“We started to see an appetite for digital engagement around physical events [before the pandemic], especially for people who couldn’t attend those events,” he said. “With this in mind, it essentially becomes a new way forward. Even when physical events are back in full force—whatever that will mean in the future—the idea that you can still virtually attend and engage with an event is really compelling.”