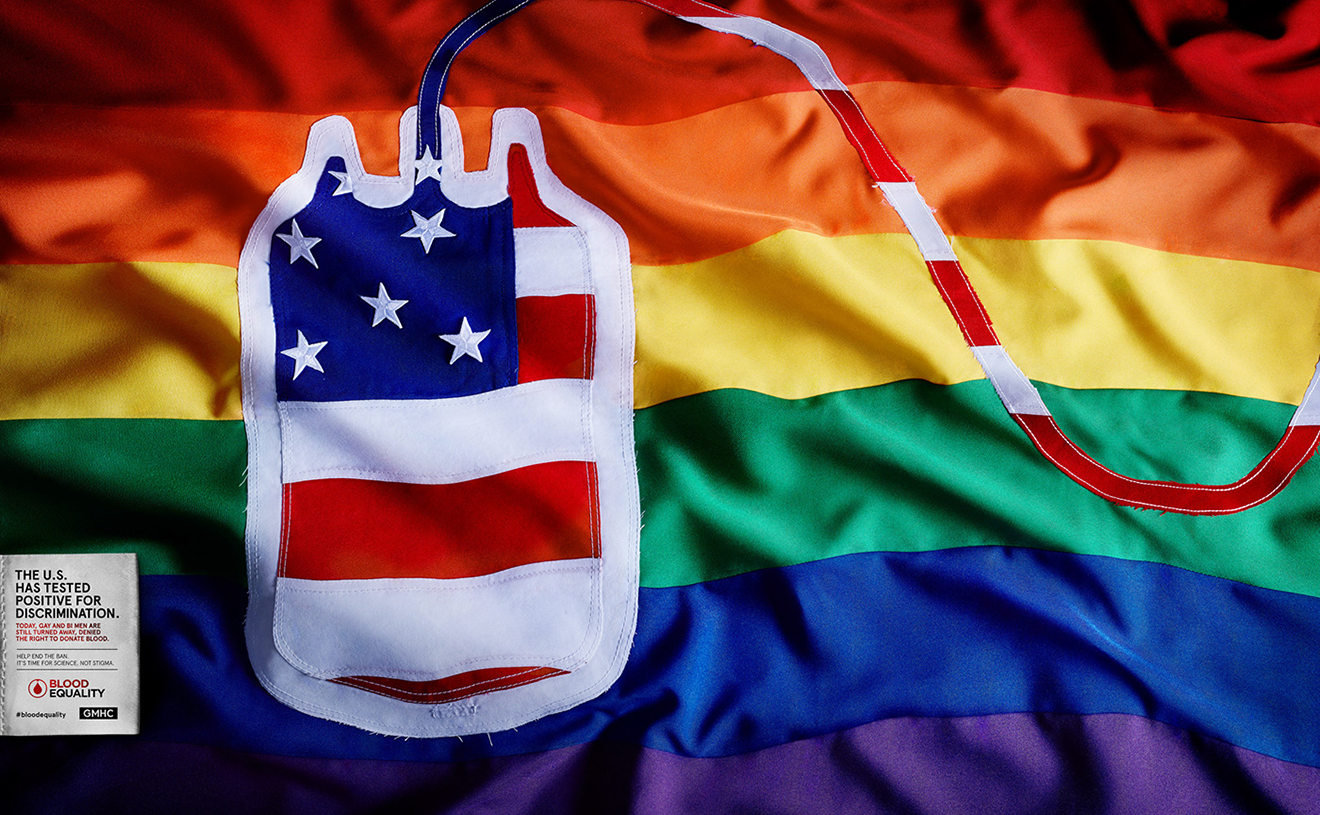 It’s 2018, and the U.S. has done away with many of the discriminatory laws that targeted the LGBTQ community in the past. Our government upholds marriage equality as well as equality in schools, the workplace and housing.

And yet, in 2018, if a man is in a relationship with another man and they have a normal sex life, they are both barred from donating blood.

According to U.S. Food and Drug Administration policy, men that identify as gay, bisexual and transgender and who have had sex within the past 12 months with another man (something the FDA actually refers to as “MSM”—for “men who have had sex with other men”—in its policies), cannot donate blood. The FDA claims it’s to prevent the spread of HIV, an outdated bias, sparked by homophobia which ran rampant in the 1980s, that gay men are more likely to have the disease.

In honor of LGBTQ Pride Month, FCB Health partnered with the Gay Men’s Health Crisis, or GMHC, an HIV/AIDS service organization, to shed light on the discriminatory ban. 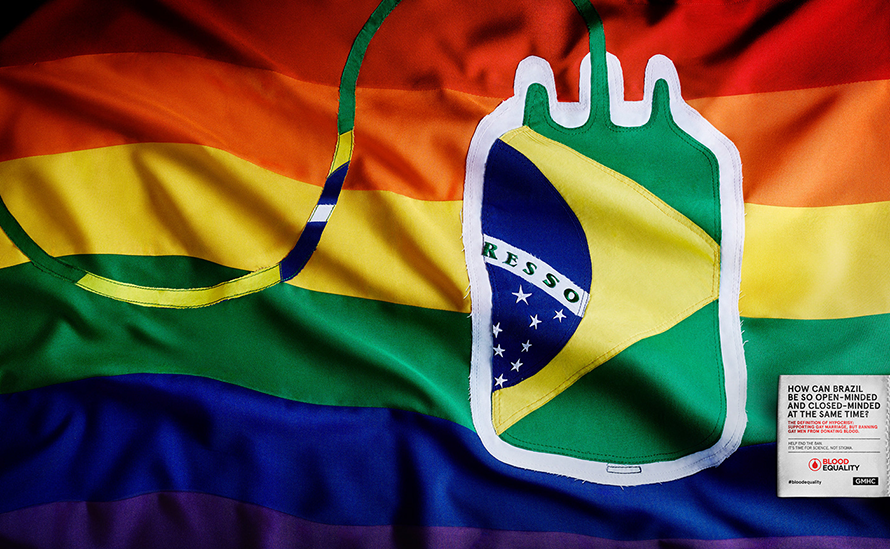 “We want to restore the fundamental right to donate blood and make it a more equitable process across the board,” Kelsey Louie, GMHC CEO, said in a statement. “Current donation policies stem from fear and outdated stigmas surrounding sexual orientation, when they should instead be based solely on testing and scientific risk assessments.”

As part of an ongoing pro bono advocacy and awareness campaign called “Blood Equality,” the IPG-owned agency and GMHC will be distributing “blood flags” across their social channels for each country that claims to endorse LGBTQ equality and yet prohibits gay men from donating blood.

Those countries include the U.S., Australia, Canada, Brazil and Germany. FCB Health and GMHC stitched of those countries’ national flags in the shape of an IV bag on the rainbow Pride flag. The flags also tote individual, scolding messages for those who think such bans are anything other than prejudiced.

Messages include: “The U.S. has tested positive for discrimination,” “Canada accepts gay love, but not gay blood” and “In Australia, donating blood only hurts if you’re gay.”

“We’re very proud to collaborate with GMHC and deepen our dedication to shedding light on issues of blood equality and civil rights, which remain critical,” Rich Levy, FCB Health CCO, said in a statement. “This creative partnership provides us with an important—and unique—platform to advocate for policy reform, change behavior and make a lasting difference through our work.”

According to FCB Health and GMHC, the campaign is not just about reforming blatantly discriminatory laws; it was also created out of pure necessity. Citing a UCLA Williams Institute study, they said that if the U.S. in particular lifted the ban, up to 1 million lives could be saved annually. 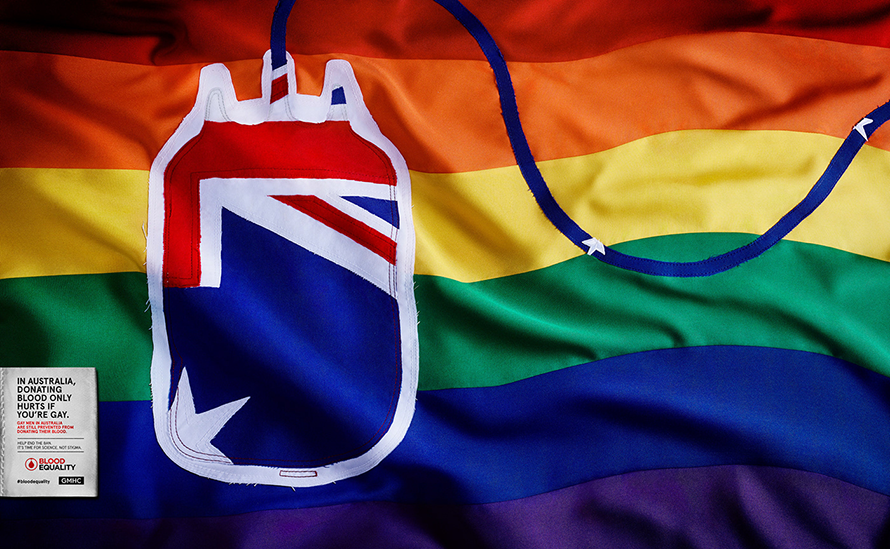 “Blood Flags” is just the latest installment in the “Blood Equality” campaign. Last year, FCB Health and GMHC created a series of events in Birmingham, Ala., which is infamous for its civil rights history, to shed light on donation inequality. That effort included “Blood Mirror,” an interactive statue that allowed viewers to see themselves reflected in the blood of 59 gay, bisexual and transgender men.

“‘Blood Flags’ is meant to resonate globally,” said Mike Devlin, FCB Health executive vice president and group creative director. “Last year’s launch of ‘One in Our Blood’ at the Civil Rights Institute in Birmingham was just the beginning. We hope that our latest installment of this initiative will continue to weave a powerful narrative and inspire change on a more universal level.”

“Blood Flags” will initially be distributed across Instagram, Twitter, Facebook and LinkedIn leading up to World Blood Donor Day on June 14 and be displayed at Pride events and GMHC’s New York headquarters. After that, FCB Health and GMHC plan to release the campaign on a larger scale globally. 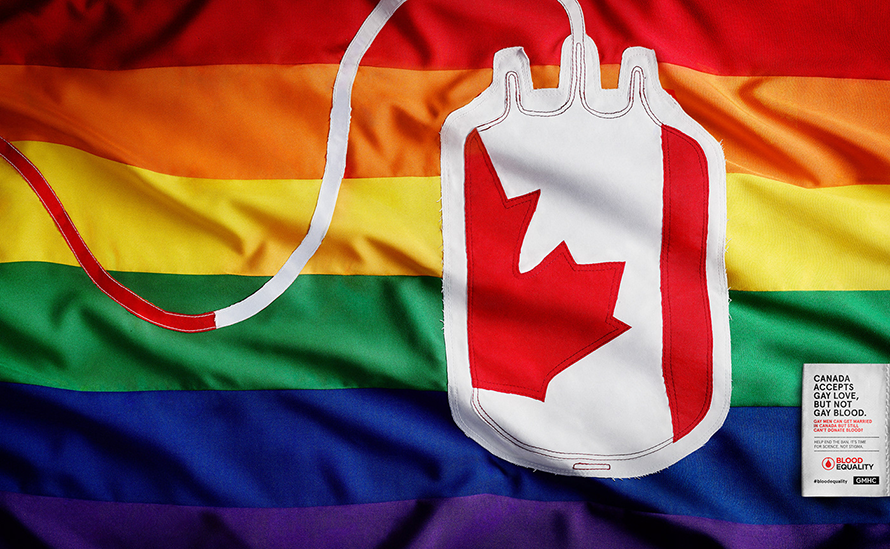