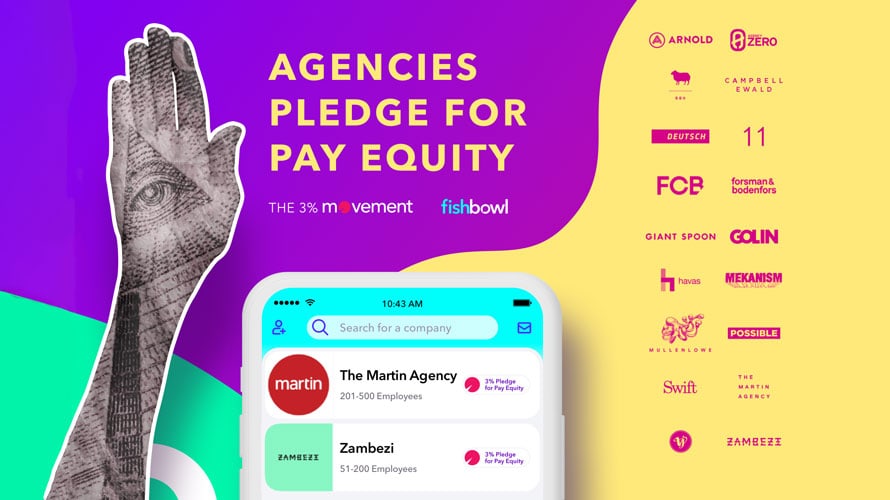 For some time now, equal pay has been a pain point in the industry. While some agencies are working hard to change this, it’s not always readily apparent which ones are actually putting their money where their mouth is.

In an attempt to bring some transparency to the matter, anonymous industry app Fishbowl has teamed up with the 3% Movement for an integration that the two hope will make it easier for women in the industry to find work at agencies that actually pay their employees fairly.

Agencies that have passed the 3% Movement’s Pledge for Pay Equity—which involves meeting three criteria, including a wage audit—will now receive a custom badge on their “Company Profile” within the app. The icon will also appear on the app’s “Search” page next to agencies that have passed the test. Additionally, users who post with their company identifier will also (temporarily) see the badge pop up on their posts.

There is no formalized process in place to ensure that agencies who take the pledge are consistently adhering to it, but those who sign it vow to “rectify like-for-like disparities” following their respective wage reviews. They also commit to “advancing pay equity through collaboration, communication, and continued identification and promotion of best practices to close the wage gap in the advertising industry.”

According to Matt Sunbulli, CEO and co-founder of Fishbowl, a whopping 92,000 conversations on the app have been about pay since 2018. What’s more, only 18% of female users say they believe that leadership at their agency is committed to pay equity between male and female employees, according to Fishbowl.

He said this effort, which was announced at the 3% Movement’s MiniCon in Washington, D.C., on June 6, will give a “louder voice” to the agencies that are making positive change—and will hopefully inspire ones that aren’t to get on board.

“Partnering with 3% brings visibility to their pledge program and allows us to introduce this framework for change,” said Sunbulli. “We’re hoping to help 3% make a bigger impact by giving them a wider audience. The best way to ignite change in this industry is not to isolate the agencies that are not performing; it’s to shed light on the ones that are performing.”

Kat Gordon, founder of the 3% Movement, said that the badge will make it easier for women to “shortlist” agencies they want to work for when they’re considering moving jobs or entering the field. She said the 3% Movement chose to partner with Fishbowl because the app brings transparency to an industry that is increasingly demanding it, particularly when it comes to the issue of equal pay.

“People’s guards are down and they don’t feel like they have to be political,” Gordon said of the app. “You really get an authentic read on how much people care about an issue.”