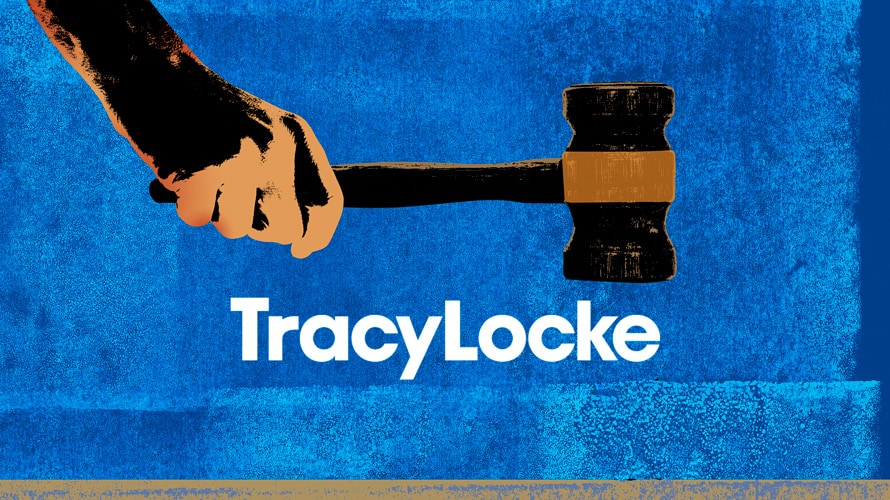 The former employee was 'abruptly terminated without notice or cause' in March 2018. - Credit by Sources: Getty Images, TracyLocke

Karen Dunbar, a 27-year ad-industry veteran who served as creative director at Omnicom-owned TracyLocke from 2015 to 2018, sued both companies today in the United States District Court for the District of Connecticut. She and her lawyer, Kerrie L. Campbell, demand a jury trial.

The extended filing, embedded in full at the bottom of this story, alleges sexual harassment, gender discrimination and wrongful termination stemming from Dunbar’s “opposition to unlawful practices.”

Unlike most such lawsuits, this one was pitched directly to various publications by PR firm Berlin Rosen today along with a corresponding press release promoting that firm’s client, Time’s Up Legal Defense Fund. In a statement, Dunbar called TracyLocke “the most blatantly sexist place I have ever worked.”

After this story initially ran, an agency spokesperson provided a statement.

“TracyLocke just received the complaint and is in the process of reviewing it,” the statement read. “Ms. Dunbar raised these allegations to the company for the first time after her termination. We then conducted a thorough investigation into the allegations. We were and continue to be confident that the allegations do not have merit and that TracyLocke maintains a safe and supportive environment for women and all employees to work.”

Neither TracyLocke nor Omnicom has named representative legal counsel or responded to the claims filed by the law firms Reardon Scanlon LLP, KCampbell-Law PLLC and Bursor & Fisher, P.A.

TracyLocke is part of the DDB network.

"With three daughters about to start their professional careers, I cannot stay silent. I feel strongly that I must speak out for them."
Karen Dunbar, former creative director, TracyLocke

The suit claims Dunbar, who previously worked at JWT, KBS and other agencies, received stellar marks for her job performance but was “abruptly terminated without notice or cause” in March 2018 after she established a group designed to provide a “support system” for female TracyLocke employees. It goes on to detail several alleged instances of sexist, misogynistic or abusive behavior that resulted in the development of the group.

The suit states that Dunbar struggled to advance at TracyLocke after joining the agency as a freelancer in 2015 because leadership “repeatedly denied her requests for the full-time employment status and attendant benefits every male member of her team received” despite the fact that she had more experience in the field than most or all of her male colleagues. It goes on to claim that a performance assessment completed after she was hired as associate creative director in 2016 concluded that she “contribute[d] to the agency above and beyond [her] assigned job.”

Despite her performance, the filing claims Dunbar could not transcend TracyLocke’s “Band of Brothers” philosophy, which reinforced a “good old boys” approach to internal culture. It cites anonymous Glassdoor reviews claiming the company is “not a place for girls to get ahead,” among other such statements.

According to the document, Dunbar and other female agency employees experienced a “severe” work environment that included “degrading acts of sexual harassment.”

The filing goes on to detail instances in which male employees allegedly threatened Dunbar and touched her in “an unwanted and offensive sexual manner,” treating her as “a sex object and punching bag.” It also claims agency leadership and human resources ignored repeated complaints regarding the behavior of multiple male staff members.

In one instance, it claims, an executive seated Dunbar next to a client who proceeded to “[pass] her inappropriate notes, and [flirt] with her” during a meeting. When she later voiced her discomfort, the suit claims, the executive responded by laughing.

The document states that TracyLocke CEO Hugh Boyle repeatedly used a “derogatory and gender-specific c-word” in a 2017 meeting at the San Francisco offices of fellow Omnicom agency BBDO after decrying “PC culture.” It also claims another creative leader at the agency insulted Dunbar by calling her a “nagging wife” and “suggested taping [her] mouth shut.”

According to the suit, female employees confided in Dunbar about their own experiences, including an instance in which a male employee allegedly assaulted a pregnant woman. The suit states that, despite repeated requests that TracyLocke update its harassment policies, the agency “did not address and rectify Dunbar’s complaints.”

The filing claims Dunbar was effectively demoted in January 2018 when leadership transferred much of the work on the HP account to a younger and less experienced man. She lost her job just over two months later “in retaliation for making sexual harassment and discrimination complaints to her supervisors and HR, for requesting and pursuing equal treatment, and for her equality advocacy,” the document reads.

Dunbar later retained Campbell, who invited the company to engage in negotiations for a settlement before filing a claim of discrimination with the State of Connecticut Commission on Human Rights and Opportunities (CHRO) and the U.S. Equal Employment and Opportunity Commission. The company did not answer these charges, and in March, the CHRO issued a notice of the right to sue.

“Having worked my way through the ranks to positions of creative leadership at top New York agencies, I feel compelled to take a public stand not only for myself but for all the women who have been unfairly and unlawfully demeaned, disrespected, diminished, harassed, abused and even assaulted but have been silenced or remained silent fearing they would lose their jobs, income and careers and be blackballed in the industry,” Dunbar said in a statement. “With three daughters about to start their professional careers, I cannot stay silent. I feel strongly that I must speak out for them.”

The filing, embedded in full below, demands a judgment declaring the agency’s practices illegal; a permanent injunction preventing them “from continuing their discriminatory practices”; an order requiring them to provide equal employment opportunities for women and remedy past actions; all available back pay, front pay, compensatory damages and punitive damages to be determined at trial; and any other relief as determined by both judge and jury.