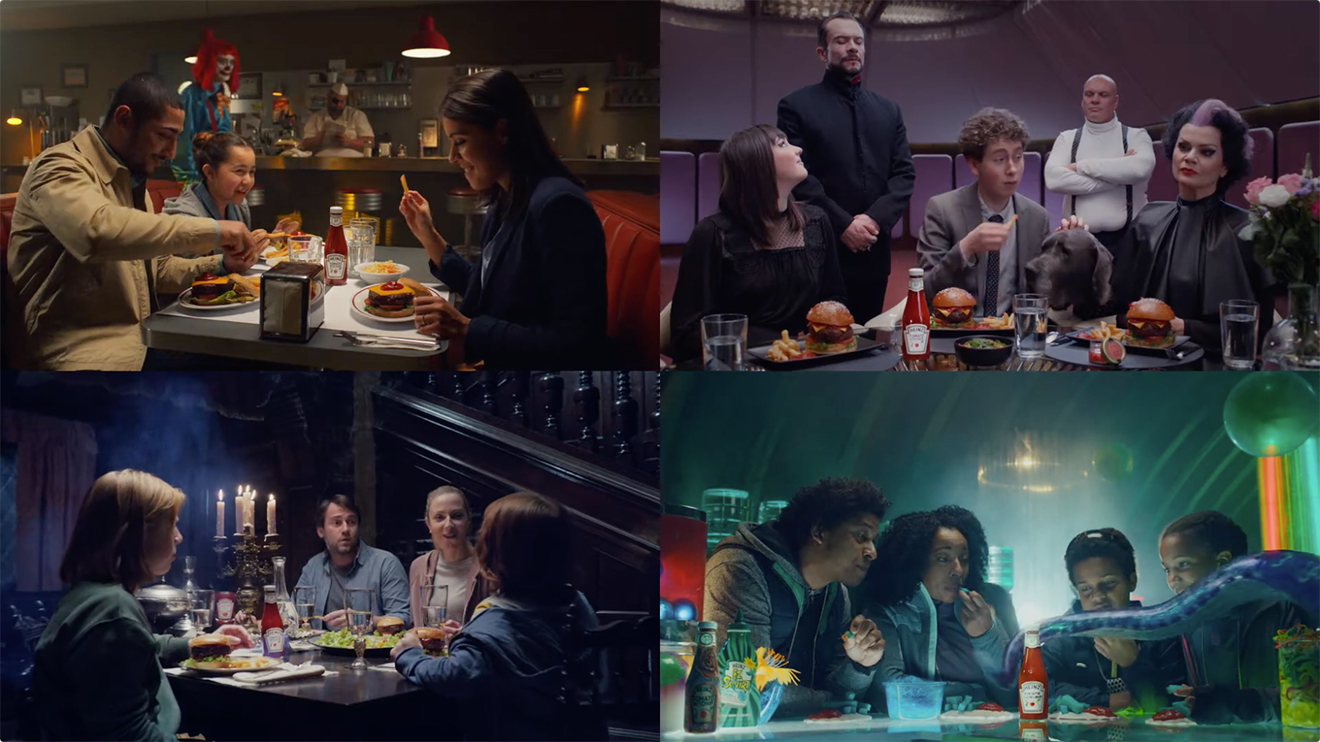 Heinz's four-in-one spot will be the brand's first Super Bowl ad since 2016. - Credit by Kraft-Heinz

A Super Bowl spot, famously, is the most expensive ad buy of the year—this year, 30-second ads are running as much as $5.6 million. But one brand found a way to run four spots for the price of one: Heinz.

For its first Super Bowl commercial in three years, Heinz tapped director Roman Coppola (famous for Mozart in the Jungle and his collaborations with Wes Anderson) and Wieden + Kennedy New York to create a spot that’s actually four ads. Thanks to a split-screen with a ‘different ad’ running in each corner of the screen, four videos simultaneously play during Heinz’s spot.

Though the four scenes are different, they carry similar elements. A group of people (two families, a couple and a group of friends) approach a spooky scene (a restaurant, two houses [one futuristic and one Victorian] and a concert venue). Inside, the visitors warily approach a meal at each of these locales. Once they reach the table, there’s a collective sigh of relief across the ads, as each group sees what’s also on the table: a bottle of Heinz ketchup.

“There truly are just so many situations, big or small, that Heinz has been a part of and is able to help bring that sense of reassurance to,” Dalia Adler, Heinz’s brand build lead, told Adweek. “Obviously it was a challenge to keep them as cohesive as possible, but there was no better way to tell the story that there are so many situations that our viewers and our consumers everywhere can turn to Heinz to.”

In the spot, there are several Easter eggs and hidden details, which are included to encourage viewers to watch the ad multiple times so they can pick up on all of them, including the number 57 at the top of a diner’s door, a nod to Heinz’s 57 varieties, and a bottle of Heinz’s EZ Squirt on a table.

“You’re gonna have to pay attention in order to catch all of them,” said Adler. “I want viewers to feel excited to go back and rewatch this to take it all in for a second and third and fourth time.”

Heinz is using its Super Bowl spot to kick off a new campaign called “Find the Goodness,” which is all about adding goodness to “moments big and small,” according to a statement from the brand.

Kraft-Heinz is also running a much-talked-about spot for snack brand Planters, which will showcase the funeral of the brand’s 104-year-old mascot Mr. Peanut.

Heinz’s spot will run during the fourth commercial break of the second quarter.

For all the latest Super Bowl advertising news—who’s in, who’s out, teasers, full ads and more—check out Adweek’s Super Bowl 54 Ad Tracker. And join us on the evening of Feb. 2 for the best in-game coverage of the Super Bowl commercials anywhere.