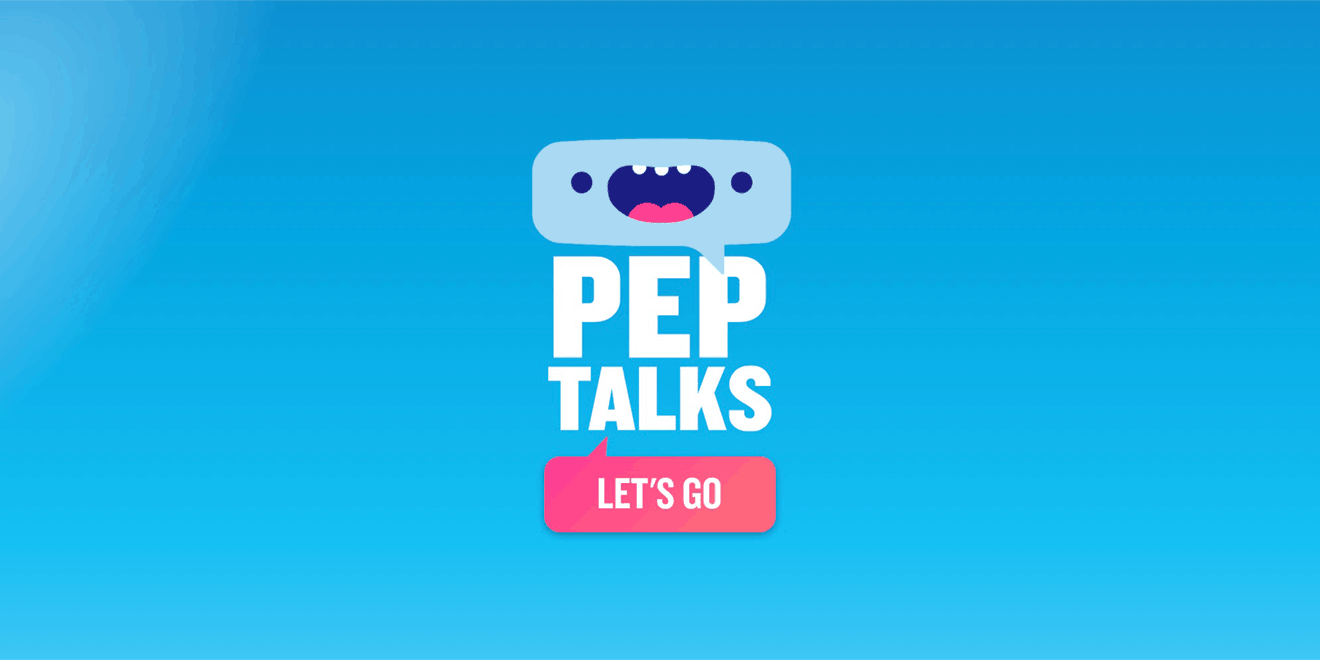 Go ahead, practice an uncomfortable conversation. - Credit by Extra Gum

Awkward conversations are an unfortunate part of life. Whether it is something substantial like breaking off a relationship or just a benign social faux pas, like letting someone know they have food in their teeth, the human experience includes difficult conversations. Now Extra Gum is using a machine to help humans with those tough moments.

Extra Pep Talks is a new website that uses artificial intelligence to help coach people through some of the most challenging life experiences. Developed by New Zealand agency Colenso BBDO, Pep Talks can help you nail a job interview, ask someone to move out or tell someone you love them.

Pep Talks is part of Extra’s “Time to Shine” brand position. According to creative director Max McKeon, the goal was to reach the under 35 demographic where other aspects of the campaign have failed to land so far.

“We found that while Extra’s relevance in the [under 35] market is falling, the use of voice-led tech is expected to rise 40% over the next year,” McKeon said. “Enter Extra Pep Talks: A conversation simulator for the scenarios where people need the most confidence.” 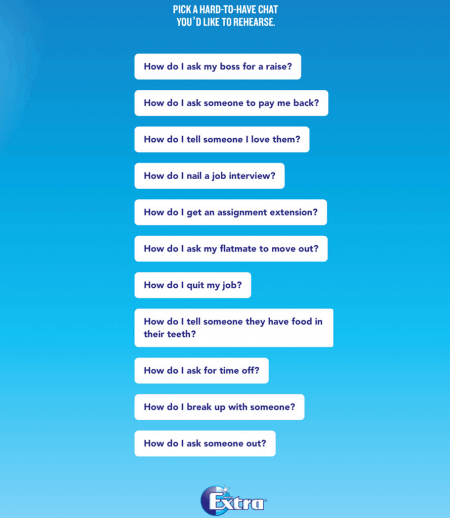 The website provides 12 different situations you can work through. The majority center around work and relationships. As anyone who has used Siri or Alexa can tell you, even the best AI isn’t perfect at discerning speech patterns. While there are some hiccups, the AI will keep gathering data as more people interact with the prompts, making responses smoother and creating bespoke experiences for users.

Data gathering has caused issues for AI conversation platforms in the past. In 2016, Microsoft’s Tay bot was forced to go offline after just one day when a coordinated attack had the voice of a teenage girl regurgitating hate speech. Those past issues were a key concern for McKeon as the team developed this platform.

“This is the internet and people will try to break it. That’s why any offensive behavior triggers a playful response to keep the user in territory that is more brand-friendly,” McKeon said.

That trigger is definitely touchy. When playing around with the prompt “How do you ask for a raise?” Pep Talks wanted to know my name (Mitch sounds like “match” when said with a New Zealand accent). Unfortunately, as many schoolyard friends realized, my name is quite similar to another word, which triggered the safety prompt: “I know things are getting heated, but there’s no need for that type of language.” 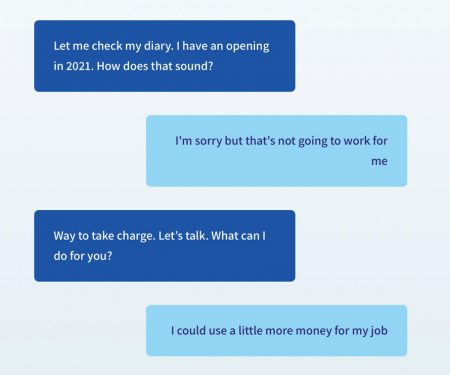 McKeon says the misunderstanding was likely caused by the difference in accents.

“We’ve been training our bot with Kiwi accents. While sexy, the accent is a few shades away from other countries. This will be corrected as the campaign goes global and the AI’s database learns from different markets,” McKeon explained.