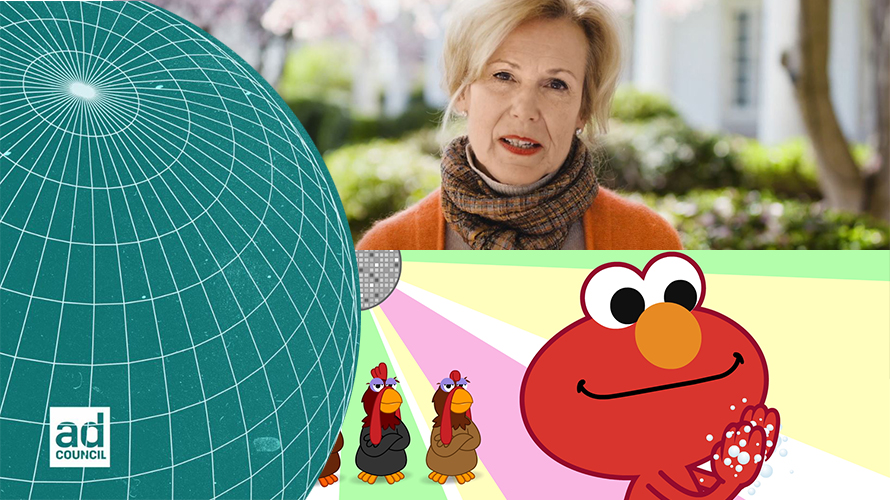 The Ad Council has partnered with dozens of media companies and government agencies to produce coronavirus-related PSAs. Ad Council

While the Ad Council is no stranger to crisis—it was founded during World War II, after all—the coronavirus pandemic has created unprecedented challenges for the country’s leading producer of public service communications.

The nonprofit was an early adopter of the work-from-home recommendation, sending everyone home on March 11 to work remotely until further notice. That weekend, things really started to heat up.

After receiving messaging points from the Centers for Disease Control and Prevention on Friday, March 13, the Ad Council went to one of its partners, NBCUniversal, with a plan for creative assets.

Working long hours through that weekend, the team had a first batch of PSAs ready to go by Monday focused on high-risk populations and those closest to them. Over the next few days, the Ad Council had garnered more than $4 million in donated media support.

Since that first crazy weekend—the same weekend South by Southwest was canceled—the nonprofit has produced four unique campaigns working with dozens of partners across the media and industry as well as government agencies, the White House, and digital and out-of-home partners. They include Sesame Street’s Elmo singing a new song about hand washing, spots featuring the White House’s response team and a slew of celebrity cameos.

This week, the Ad Council dropped the latest installment of its #AloneTogether campaign in partnership with ViacomCBS. The spot features homemade videos from stars from The Circle and Love Is Blind, two Netflix shows that were gaining popularity during the beginning of the coronavirus pandemic and kept rising as people increasingly holed up in their homes.

Next, the Ad Council is working to focus more of its #AloneTogether messaging to highlight the specific risks related to mental health during quarantine, said Sherman, for both those stuck inside their homes struggling with the effects of social isolation and those in essential industries that are getting worn down by the fear of facing higher risks every day they go to work.

“The mental health issues that we are currently facing and will continue to face are critical,” Sherman said. “And so we’re pivoting some of our work.”

The Ad Council is also pivoting several other ongoing campaigns to coronavirus-specific messaging, like those relating to hunger, caregiving and fighting bias. “Food insecurity and hunger is a bigger issue now than it was three weeks ago,” Sherman said. The same is true with caregiving, especially for older people who are at a higher risk during the pandemic. The Ad Council is working with longtime partners AARP and Feeding America to shift those ongoing campaigns to messages specifically relevant to this moment.

The nonprofit also has coronavirus-specific anti-discrimination messaging in the works as part of its Emmy Award-winning “Love Has No Labels” diversity and inclusion campaign. “I think there have been some issues around the way this has been characterized, targeting certain communities,” Sherman said. With “Love Has No Labels,” the Ad Council hopes to be able to address those issues with an anti-discriminatory message.

The Ad Council will be also be rolling out campaigns in the next week or so in partnership with WWE, featuring several of the network’s entertainers—one of the nonprofit’s latest partners to jump on board to help with messaging that’ll keep Americans safe and healthy during this crisis.

“The generosity and the talents and the commitment is just so heartening, because we have such an ability as an industry to do good,” Sherman said. “We are going to save lives because we were out there so quickly with some of those messages, and we’ll continue to roll them out. And at the end of the day, that’s how we measure success for ourselves.”