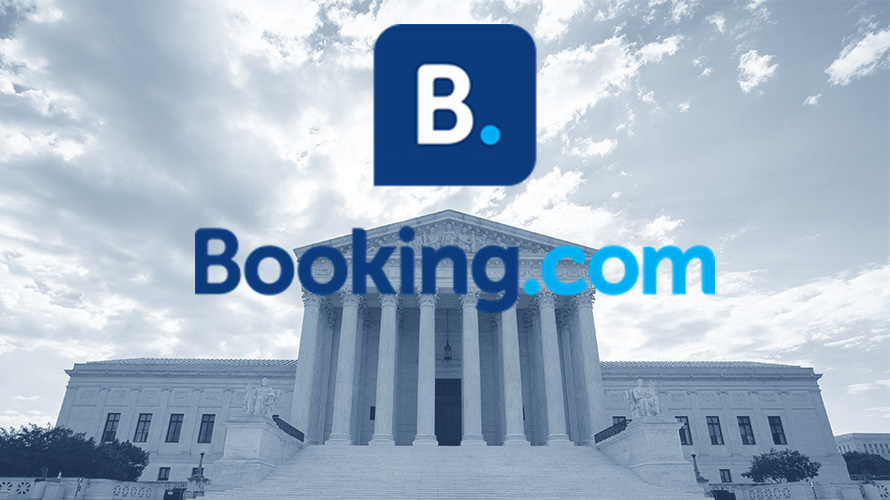 Booking.com's original trademark application was rejected because its name was deemed too generic. - Credit by Booking.com, Getty Images

Travelers don’t lack for brands and businesses to help when booking a trip. That simple verb, long used by travel agents and travelers high on anticipation, is inarguably generic. But, when tied to a web domain, Booking.com represents a 20-year-old online travel agency that can officially be trademarked and protected, according to the Supreme Court.

Last week, the high court sided with Booking.com after the reservation site was previously rejected for a trademark by the United States Patent and Trademark Office, which had argued that “booking” was too broad and general of a term.

Although the decision didn’t generate massive headlines like some of the other rulings handed down recently—including barring the Trump administration from dismantling DACA and expanding the 1964 Civil Rights Act to protect LGBTQ employees from discrimination—it did prove something about the importance of brand marketing, at least in the eyes of the law.

While the term may be generic, so long as the public recognizes the services the brand provides, it can register for a trademark. Think of it as the backwards version of the fights brands like Kleenex and Xerox have had to maintain their trademarks after people began to use their names as the generic word for their product or the action they perform.

A trademark would protect Booking.com from other businesses trying to infringe on its intellectual property. Eight of the nine justices decided that Booking.com was worthy of the trademark. The lone dissent belonged to Justice Stephen Breyer, who argued that granting the request was “inconsistent with trademark principles and sound trademark policy.”

“Broadly speaking, generic terms aren’t supposed to be registered as trademarks,” said Larry Nodine, a member of the International Trademark Association, a group that often weighs in on contentious and important trademark cases in the U.S. Court of Appeals. “Everyone concedes that Booking was generic, but the question of what the combination means was disputed.”

Brand names that feature combinations aren’t a new phenomenon of the digital age. In 1888, Goodyear Rubber Company was unable to register for a trademark because it simply added the word “company” to Goodyear Rubber.

Although Goodyear has been a household brand name for more than a century, at the time the Goodyear process was the chemical method by which rubber was made, named after its inventor Charles Goodyear. Goodyear was a generic term; adding “company” to it didn’t work in the eyes of the Supreme Court.

Now, when domain names are vital, brands like Art.com and Dating.com have been able to score trademarks. Hotels.com was denied because it was too generic.

“The hallmark of trademark law in the U.S. is consumer perception—what really matters is what consumers think,” said Susan Natland, a lawyer at Knobbe Martens who specializes in trademark and brand protection. To that end, Booking.com included a consumer survey as part of its argument that showed 74.8% of consumers consider to be Booking.com a brand name, not a generic term.

“They have so much consumer recognition in their name: in use, in advertising, in their promotions, and consumers recognize it to be more than just a descriptive term,” Natland said. Booking.com was a specific source of services, instead of a generic “booking” brand.

That’s the work of its marketing department.

“Booking.com has specifically spent a lot of money and a lot of time advertising so consumers perceive Booking.com as a brand name, not as a generic term,” said Jeff Warshafsky, a trademark attorney. “Ad spend is a factor that can matter in that analysis.”

In the same survey, more than 60% of respondents believed that “Washingmachine.com,” a fictional brand, was a generic name, only 33% believing it was an actual brand.

“If someone were to start a company called Washingmachine.com, it could likely secure a similar level of consumer identification by investing heavily in advertising. Would that somehow transform the nature of the term itself?” Justice Breyer asked in his dissent. “This hypothetical shows that respondent’s survey tested consumers’ association of Booking.com with a particular company, not anything about the term itself.”

Wading into the legal waters, Booking.com was helped by the fact that it was an action, not a product category. “The classic definition of a generic term is that it describes a category of goods, and Booking.com is not a category,” Nodine said. “Nobody says that Travelocity.com is ‘a Booking.com-type of website.'”

But, it is a weak mark and Booking.com admits as much.

Natland agreed. “It’s an inherently weak mark; it’s not going to have strong protection around it. Technically, they should only be able to go after marks that are identical or virtually identical.”

Should, for example, an ebooking.com or a fastbooking.com try to step in and Booking.com tried to fight it, the case would be “laughed out of a courtroom,” Nodine said.

The decision could also lead to more litigation, as more generic brands see Booking.com’s win and apply for their own applications.

“They have to be tested case-by-case. There’s more flexibility, but what that also means is there’s going to be more cost battling these issues out on the facts of each case. It’s going to be fact-dependent,” Natland said.

“We may see an uptick in trademark applications as a result of this decision, but I don’t expect you’ll see a huge number of these generic .com trademarks actually being registered,” he said. “It depends on how consumers perceive the combined term.”