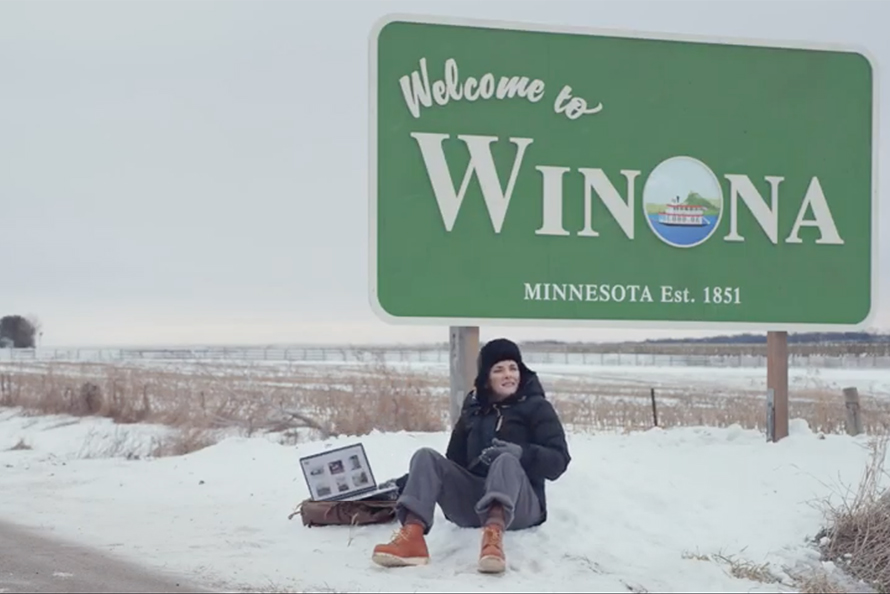 Winona the actress heads to Winona the city to document life there. - Credit by Squarespace/YouTube

If it doesn’t have a website, did it even happen?

That’s essentially the premise of Squarespace’s Super Bowl ad, which stars Winona Ryder and will air between the first and second quarters of the game. In it, a puzzled police officer pulls over to ask Ryder, who’s lying in some snow on the side of the road in her hometown of Winona, Minn., what she’s up to.

When she nonchalantly explains that she’s building a website that features pictures she’s taken of the Midwestern town, he appears unfazed and lets her get on with her day.

“A website makes it real,” reads the message at the end. The Super Bowl ad is a teaser of sorts, as it directs curious viewers to WelcomeToWinona.com, which is home to a collection of photos that the Stranger Things actress purportedly took herself on a recent trip to Winona.

According to Squarespace, which created the ad in-house, the photography is being turned into a book called “Welcome to Winona.” Only 100 copies will be available for purchase, and all proceeds will go to the American Indian College Fund, an organization dedicated to increasing the number of American Indians with college degrees.

As part of the campaign, Squarespace has created a three-minute film—which can also be found on the website—that shows Ryder walking through Winona and documenting its people, landmarks and happenings.

In the film, which is equal parts playful and touching, Ryder explores the town she’s named after but has little connection to now. Her travels take her to a local diner, ukulele club and bowling alley.

“I came here to find the true Winona,” she says. “To become a Winonan. And I did. But what I didn’t realize was how much I’d discover about Winona along the way.”

Last week, Squarespace announced its plans to return to the Super Bowl with an ad starring Ryder. Residents of Winona spotted the actress filming the commercial earlier this month, according to local press reports. However, it appears Squarespace took some creative liberties while filming the ad, as not all of it was shot in Winona—for instance, the bowling alley she’s seen in is actually in Minneapolis.

Squarespace said it is giving residents of Winona a comped website for one year to provide a platform for its people and places, particularly the small businesses and entrepreneurs based there.

For all the latest Super Bowl advertising news—who’s in, who’s out, teasers, full ads and more—check out Adweek’s Super Bowl 2020 Ad Tracker. And join us on the evening of Feb. 2 for the best live coverage of the commercials anywhere.