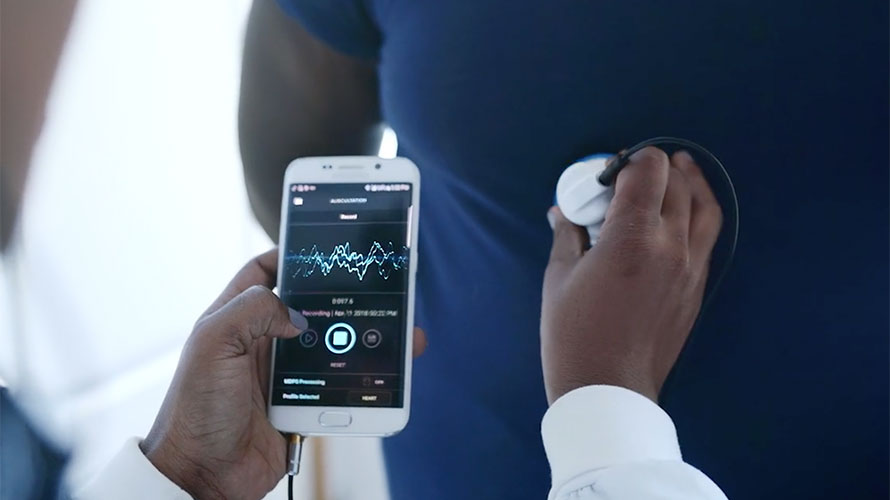 The Aria stethoscope could be in production by the end of 2018. - Credit by J. Walter Thompson

With the help of J. Walter Thompson, Bongiovi Acoustic Labs shows us how music can be used to improve healthcare for people around the world.

Using its patented audio technology and algorithm (called MDPS), the sound engineering company founded by producer and recording engineer Tony Bongiovi—who also founded New York’s Power Station studio, produced records for the likes of the Talking Heads and the Ramones and is Jon Bon Jovi’s cousin—developed a prototype of a new digital stethoscope, in partnership with JWT, that claims to be a more affordable and accurate telemedicine solution for those in need around the world.

The device is named the Bongiovi Aria and it’s made from cost-effective 3D-printed materials and advanced technology that optimizes the quality of sound and therefore can improve diagnostic abilities.

The above video describes the device a bit further and explains why it works better than the traditional stethoscope, which really hasn’t been revamped since its founding in the early 1800s.

James declined to comment on how much the Aria costs to make or how that differs from the traditional stethoscope. He said the device is still in the early stages and JWT and Bongiovi Acoustic Labs are currently working to reel in investors to develop it at scale and distribute it. James said their “intent” is to start production on the Aria by the end of 2018.

But how did this concept come about? It all started two years ago when Bongiovi Acoustic Labs began “dipping toes” in other industries including telemedicine and aerospace.

JWT was brought on to examine Bongiovi Acoustic Labs’ current technology in place for the music industry and reimagine it. James called the creative shop’s partnership with the company a “unique” one.

Bongiovi added in a statement, “The Aria allows for high definition audio recordings to be captured, processed and shared around the world. We asked the team at JWT to turn our patented audio technology into a highly functioning medical device.”

James said JWT leaned on its tech-forward programs including its in-house creative think tank, the JWT Innovation Group, to develop the Aria prototype.