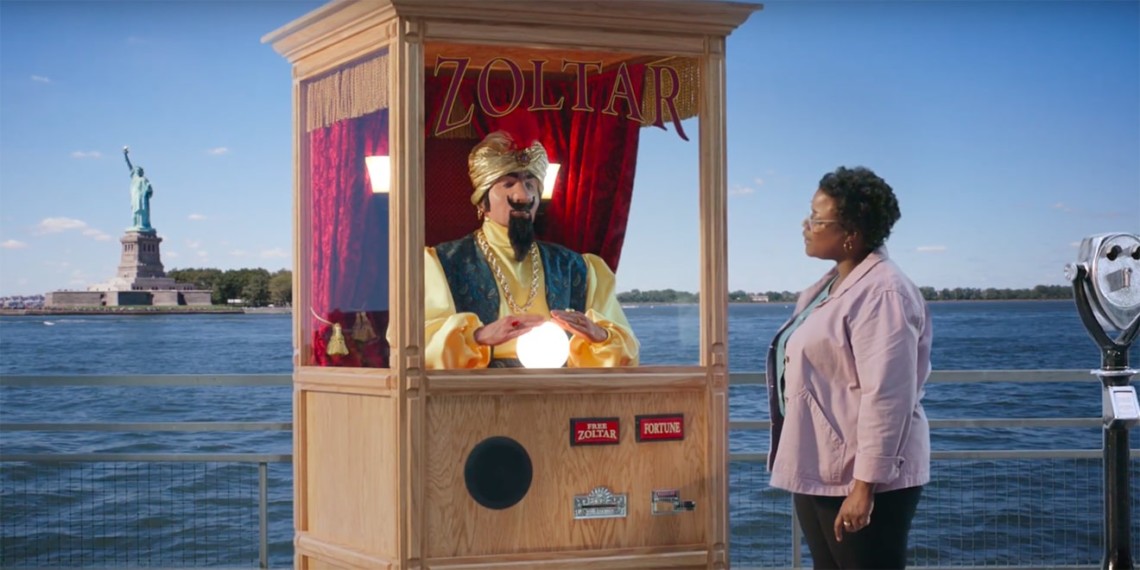 If Zoltar helps you, will you help Zoltar? Liberty Mutual

For more than five years, Liberty Mutual has been known for its ads with the Statue of Liberty in the background—but that hasn’t always been a good thing.

The campaign, officially called “Truth Tellers,” has traditionally been bland at best and grating at worst (as illustrated by the internet’s oddly intense backlash against the 2016 ad featuring a woman who named her car “Brad”).

But since switching agencies in 2017, from campaign creator Havas to Goodby Silverstein & Partners, Liberty Mutual has seen a rapid evolution of its ads into some considerably weirder territory. And the approach is working, the brand says, which likely explains why the newest set of “Truth Tellers” spots are the oddest and most compelling yet.

Thanks to the last batch of spots in the series and the launch of the “LiMu Emu and Doug” campaign, Liberty Mutual says it’s seen a strong increase in ad awareness.

“The humor has been effective for us, specifically in driving ad recall,” says Jenna Lebel, Liberty Mutual’s vp of brand and integrated marketing. “It’s been great to see the progress we’ve made with the campaign. Our unaided awareness has lifted 25% year-over-year through the evolution of ‘Truth Tellers’ and the introduction of LiMu the Emu.”

In one new spot, we see a before-and-after transformation that’s literally too good to be true. While it’s reminiscent of Geico’s “Interrupt-a-palooza” ads, the spot is the first in the “Truth Tellers” series to truly break the waterfront format in a creative way:

GS&P creatives say they wanted their reboot of the campaign to stay true to the setup while taking it in new directions, both visually and in terms of memorable characters.

“We kind of enjoy the challenge of working in a box sometimes,” says executive creative director David Suarez. “We know the message we have to say, and we have this firmly established campaign: someone standing in front of the statue of liberty has to deliver this message. But beyond that, the reins were let off.”

“Truth Tellers” spots were traditionally pretty static, featuring one continuous take. GS&P has loosened the format, as seen in the “Zoltar” spot, which changes camera angle and, like other new spots in the campaign, features a slow zoom for a subtle sense of motion.

Lebel says “Zoltar” is an example of how the brand is trying to create ads that are “one part familiar and one part unexpected.” Just as “LiMu Emu and Doug” blends the familiar trope of buddy-cop movies with the weirdness of a flightless avian detective, “Zoltar” features a fortune-telling booth many will recognize from the plot of the 1988 Tom Hanks movie Big but also uses the machine in an unexpected way for a quirky conclusion.

In the new ad “Thoughts,” the familiar-meets-unexpected formula uses a clichéd line of boilerplate ad copy—”Imagine what you could do with all that money you save”—to set up a long, hilariously silent shot of a man literally imagining the scenario. Best of all, he doesn’t seem to like what he sees.

That look he’s giving wasn’t exactly scripted. “Thoughts” began as a brief script that didn’t specify the look the actor would give. Instead, the creative and production teams tried a few different options on set until stumbling into their favorite: a vague look of anticipation turning to something more akin to mild dread.

“We have probably two hours of footage of what his face looks like,” says ecd Danny Gonzalez.

The fourth new ad, “Bad Job,” features a handsome but hapless actor trying to stumble through the script: