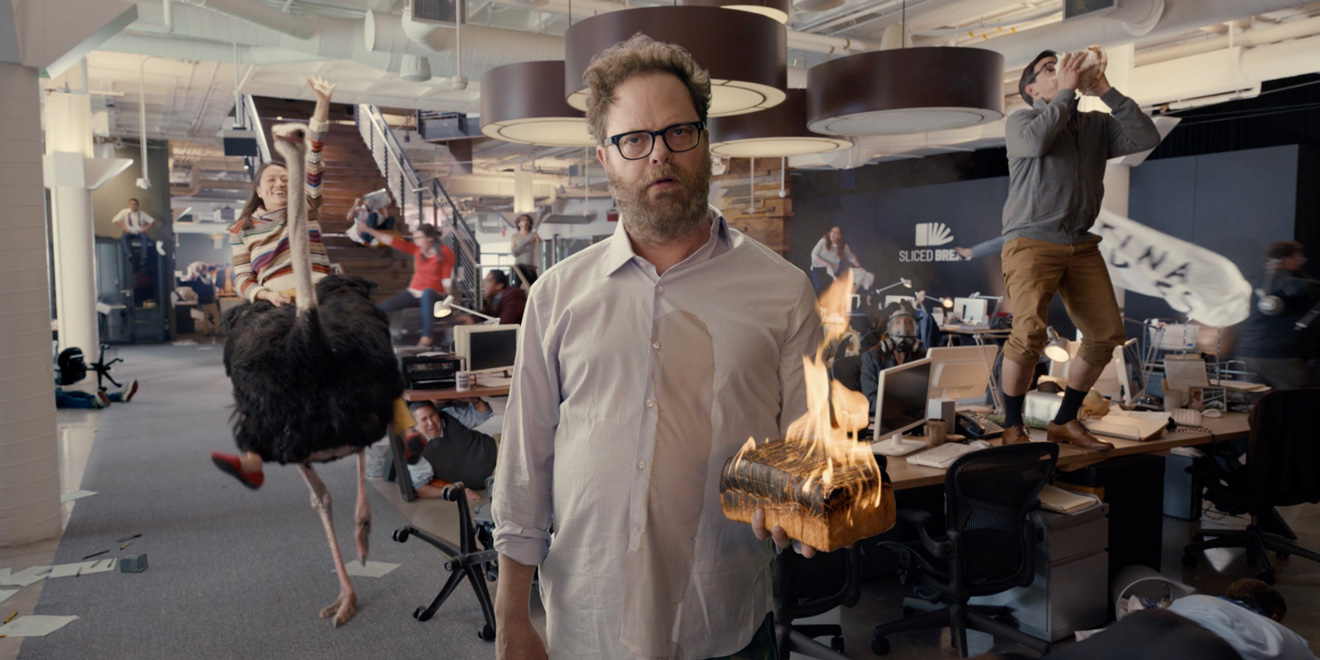 Not a typical day at Sliced Bread headquarters. - Credit by Little Caesars

For all the benefits the invention of sliced bread has bestowed upon the world, there certainly seems to be a lot of new best things that have come since.

This, essentially, is the premise of Little Caesars’ first Super Bowl spot, starring Rainn Wilson of The Office fame as the head of “Sliced Bread Inc.” After the Detroit-based pizza franchise rolls out its delivery service, Wilson’s once comfy position at the top of the food pyramid quickly begins to crumble.

“Sliced bread is toast,” announces a news broadcaster, as a graphic of Sliced Bread Inc.’s share price shows it plummeting -1,269% over his shoulder.

Bad things happen. Hilarity ensues. Before the ad ends, Wilson finds himself begrudgingly playing for the other team.

“The opportunity to leverage the advertising scale of the Super Bowl is the perfect place to showcase our extreme value with our new delivery service,” said Jeff Klein, senior VP of global marketing at Little Caesars, in a statement.

Earlier this year, the brand known for its Pizza! Pizza! slogan announced that it would resume offering delivery at 90% of its restaurants after a 20-year hiatus.

The 30-second ad, scheduled to air during the third quarter of Sunday’s game, was created in partnership with its creative agency of record McKinney, which won the account last October.

“We hope the audience enjoys watching it as much as we enjoyed creating it,” said Jonathan Cude, McKinney’s chief creative officer, in a statement. “And it’s Little Caesars’ first-ever Super Bowl commercial. So, you know, no pressure.”

Check out the 60-second extended cut of the spot here:

For all the latest Super Bowl advertising news—who’s in, who’s out, teasers, full ads and more—check out Adweek’s Super Bowl 2020 Ad Tracker. And join us on the evening of Feb. 2 for the best in-game coverage of the commercials anywhere.
@hiebertpaul paul.hiebert@adweek.com Paul Hiebert is a CPG reporter at Adweek, where he focuses on data-driven stories that help illustrate changes in consumer behavior and sentiment.