Ms. Adcolor 2017 and 2018 Discuss How the Group Helped Further Their Careers

They both joined Anomaly earlier this year 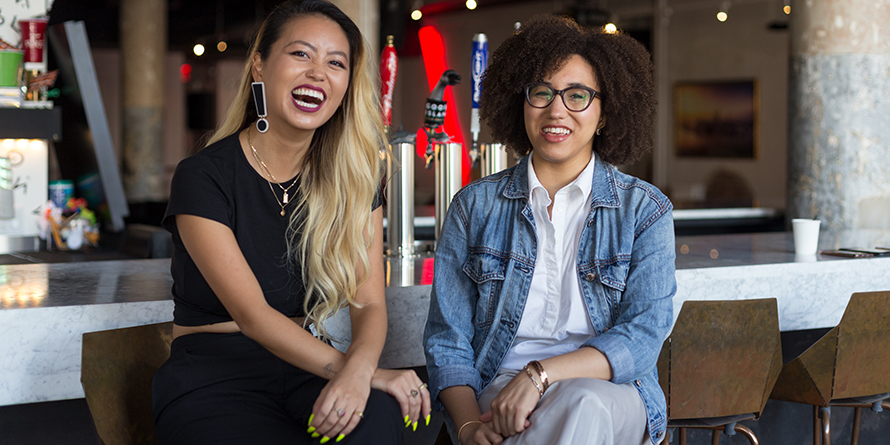 Michelle Almeida, an account executive in design and innovation at Anomaly, was focused on feverishly writing a congratulatory email to the participants in this year’s Adcolor Futures program, which she helps lead, when she first heard her own name announced as Ms. Adcolor 2018.

The organization announced the nominees, honorees and the Futures class of nearly 40 young advertising professionals via Facebook Live in June. They all received invitations to attend Adcolor’s upcoming 12th annual conference in Los Angeles.

For Almeida, the award “feels like encouragement” from Tiffany Warren, the Omnicom svp, chief diversity officer who founded Adcolor, and Omnicom director of diversity Christena Pyle, who serves as its director. She described both as “personal mentors and friends.”

Almeida is an alumna of the 4A’s Multicultural Advertising Intern Program, or MAIP, through which she earned an internship at Havas in 2012. Upon graduating from the program, she became a MAIP mentor, and in 2016, after landing her first major agency role as an account executive at Ogilvy, she got involved with Adcolor. She now serves as co-lead of its Futures Planning Committee, a program designed to nurture the careers of minorities who have been in the industry for one to three years.

"To have an Anomaly employee achieve this recognition in back-to-back years is a real honor given the importance of the work being done by Adcolor."
Franke Rodriguez, CEO and Partner, Anomaly New York and Toronto

Ms. Adcolor described her mentorship efforts as a “passion project,” adding, “It would be incredibly selfish to take all the mentorship I received and keep it to myself.” She joined Anomaly as an account executive on Jan. 8, the very day Ms. Adcolor 2017, Jezz Chung, came on as a copywriter.

When Chung received the honor last year, she was a creative at TBWA\Media Arts Lab. She is also a 2013 MAIP alumna as well as a former member of the AAF Most Promising Multicultural Students Program and Adcolor Futures.

“To have an Anomaly employee achieve this recognition in back-to-back years is a real honor given the importance of the work being done by Adcolor,” said Franke Rodriguez, CEO and partner, Anomaly New York and Toronto. “It’s also an indicator of our complete commitment to two founding principles of our agency: We want the absolute best talent in the world at our place … and we embrace diversity across everything we do—diversity of thought, diversity of output and diversity of talent across skill set, gender, race and identity.”

After being named Ms. Adcolor 2017, Chung told Adweek, she’s “been more comfortable using my voice.” Now, “there’s no one” she would rather pass the baton to than Almeida, she said.

“Her perspective on this industry, on inclusion, on how to create change is so positive, and her energy is infectious,” Chung said. “I love the way she thinks about things. She’s in accounts, but she has a creative soul.”

Almeida said Chung has “easily become one of my favorite people.”

“It’s a complete coincidence that we started here on the same day,” Almeida said, “but certainly our respective passions and visions inform the kind of work environments and opportunities we pursue.”

During the 2018 FIFA World Cup, Almeida said, so many of Anomaly’s employees across different backgrounds and experiences gathered to watch Croatia and England face off that she remembered looking around the room and feeling empowered. “Anomaly is really dedicated to creating a space to bring your full self,” she said.

Almeida is a first-generation descendant of the small island nation of Cape Verde. She’s currently working on a personal project to create a platform for Cape Verdeans to tell their stories, the intent being to educate people on “the diversity of blackness and the international community.”

As for this year’s conference, Almeida said she expects Adcolor to “up its ante.”