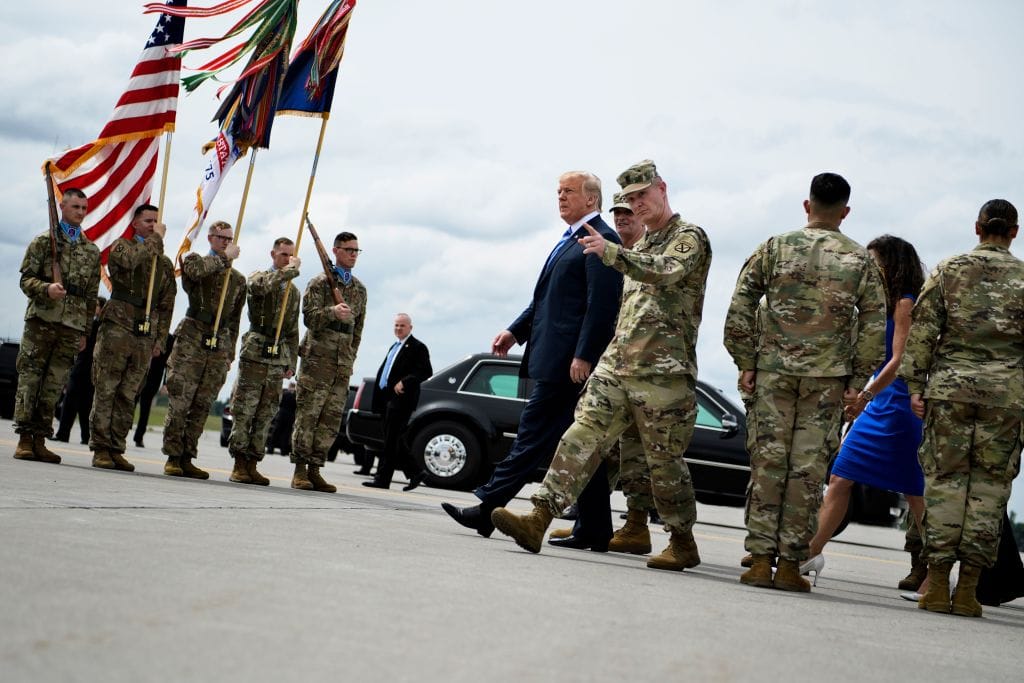 On Monday, President Donald Trump signed into law a massive, $717 billion defense bill for 2019 that promised to, among other things, increase some soldiers’ salaries, repair “crumbling military buildings and other infrastructure,” build more F-35 jets and launch a pilot program designed to “maximize opioid safety in the Military Health System.”

According to a press release from the Department of Defense, the law passed through both houses of Congress “in record speed” earlier this month. As noted in various media reports, the president spent approximately 30 minutes praising H.R. 5515, or the “John S. McCain National Defense Authorization Act for Fiscal Year 2019,” during a Monday trip to the Fort Drum Army base, without ever mentioning the Arizona Senator and sometime Trump foil.

Another area of the law that Trump did not mention concerned advertising for the U.S. Army. In short, the NDAA withholds half of the Army’s total marketing budget for fiscal year 2019 until the organization can demonstrate that it has made progress on efforts to prove greater return on investment.

These demands arise in response to a recently concluded audit, first reported by Adweek, that identified tens of millions in “ineffective” spending on assorted marketing projects during fiscal year 2016.

“This year’s NDAA continues to emphasize enhanced accountability,” read the House Armed Services Committee’s summary of the Act, which was published last month. “For example, it requires the Army Marketing Group to implement measures to improve the effectiveness of its advertising and marketing campaign and to provide additional review and oversight of related contracts. In order to ensure these new accountability procedures are implemented, the NDAA withholds a portion of funding until required action is undertaken.”

"The AMRG is diligently working to not only meet but exceed the reform initiatives approved by Army senior leaders, while we support our critical recruiting mission."
Army Marketing and Research Group Spokesperson

Tucked within the full 1,300-plus page document itself is a passage clarifying that the House and Senate voted to suspend half of the Army Marketing and Research Group’s (AMRG) budget.

Section 829, titled “Limitation of Funds Pending Submittal of a Report on Army Marketing and Advertising Program,” states that the budget will remain restricted until Secretary of the Army Dr. Mark T. Esper submits a report to the Committees on Armed Services of the Senate and House of Representatives regarding the recommendations made by the Army Audit Agency (AAA).

“Not more than 50 percent of the amounts authorized to be appropriated by this Act or otherwise made available for the AMRG for fiscal year 2019 for advertising and marketing activities may be obligated or expended until the Secretary of the Army submits the report required under subsection (a),” the bill reads.

This report is due 90 days from the enactment of the act on Monday. According to the law, it must address the following:

After Secretary Esper submits his report, Comptroller General of the United States Eugene Louis Dodaro, who also runs the Government Accountability Office (GAO), will have 90 days to conduct a review of the “results and implementation of the recommendations” included in the same audit.

“The AMRG is diligently working to not only meet but exceed the reform initiatives approved by Army senior leaders, while we support our critical recruiting mission,” wrote a spokesperson for the AMRG. “Improvements to organizational structure, processes and training are being assessed and implemented to enhance not only our contract management and oversight, but our marketing strategy and effectiveness. We will continue to work with our agency of record in coordination with the Mission and Installation Contracting Command (MICC) while the source selection process continues.”