Brands are stretching out to drive conversation throughout the game 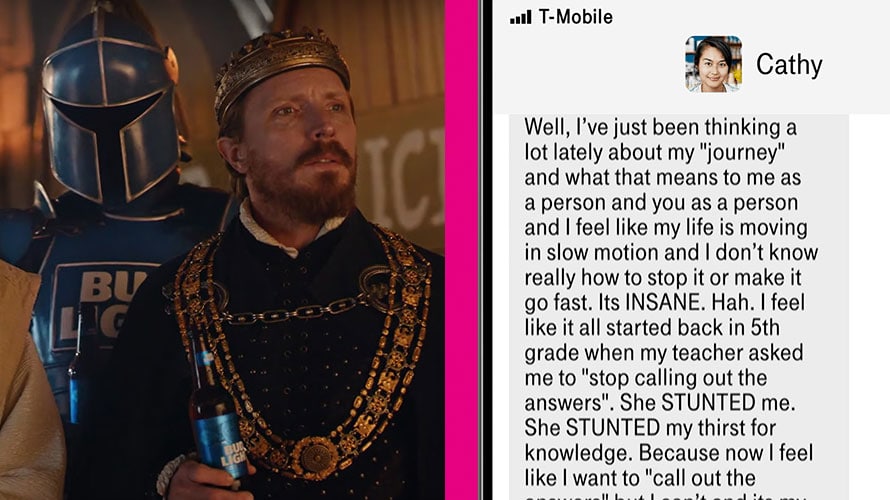 Both Bud Light and T-Mobile took inspiration from Tide "It's a Tide Ad" campaign and ran a spot in each quarter of this year's Super Bowl.
Bud Light, T-Mobile
Share
By Erik Oster
|
February 4, 2019
Share

There’s an increase in brands who ran an ad in every quarter of this year’s Super Bowl.

Last year, P&G’s Tide took over the conversation during the game, running an ad starring Stranger Things’ David Harbour in each quarter that had viewers questioning if all the other ads were secretly Tide ads, too. In addition to Tide, two of the other most popular ads of the night went beyond 30-seconds as well: Amazon’s 90-second spot and Doritos and Mountain Dew’s two 30-second ads, something which has led MullenLowe chief strategy officer Elizabeth Paul to wonder if the “minimum viable investment” for effective advertising in the Super Bowl is rising beyond that of a 30-second ad.

“It’s not a substitute for great creative,” she said. “They married creative excellence to really strong financial stakes, and the result is they were three of the most talked about brands of the night.”

While a costly investment, running an ad in each quarter can actually mitigate the risks inherent in advertising during an unpredictable sports event. This year, two brands—T-Mobile and Bud Light—followed Tide’s footsteps in hopes of driving a similar conversation with audiences.

“The benefit is you never know how a game will flow and audience engagement in the actual game varies,” Metaforce co-founder Allen Adamson explained. “If it’s a blowout and you’re in the fourth quarter, you’ve blown it.”

“It’s probably not the most efficient move, but it’s a hedging move to cover your downside. I don’t think there’s much upside,” he added, characterizing the tactic as usually more about risk aversion.

It also increases the likelihood of being one of the brands who viewers remember.

“In my mind, to win [the Super Bowl as an advertiser], it has to be one of the most talked about ads of the night,” Paul said. “You want to dominate the cultural conversation,” something that typically only three to five advertisers pull off, she continued. “One of the ways that [Tide] dominated the conversation was by dominating pods in  the game.”

“One of the things Tide set a precedent on last year [is that it] allowed them to create a shared device or experience that thread the needle all the way through the game and almost guaranteed that people would be talking about it,” she added. “What T-Mobile and Bud Light did this year is they used [an ad in each quarter] to keep their brand a part of the conversation over the course of the evening.”

As more advertisers turn to investments beyond a single ad buy, it becomes harder for brands to stand out with a single 30-second ad, she explained.

When done well, the approach can also offer brands distinct capabilities as a broader creative platform.

“You have the option, as Tide did last year, to hook your viewers early in the first quarter and develop a more robust platform to market your brand,” Adamson said, adding that he didn’t think that was something that Bud Light or T-Mobile accomplished this year. “I don’t think viewers were waiting on the edge of their seats for the next installment of either ad.”

Others had a more positive reaction to how brands utilized the approach this year, particularly Bud Light.

Paul noted that both Bud Light and T-Mobile “told great stories” without relying on the convention of celebrity appearances and “used the expanded canvases that they had really well.”

Charles Taylor, professor of marketing at the Villanova School of Business, said Bud Light’s Game of Thrones tie-in “used the element of surprise really effectively,” building expectation with previous ads in a way that contributed to that sense of surprise, even if it was “probably better for Game of Thrones than Bud Light.”