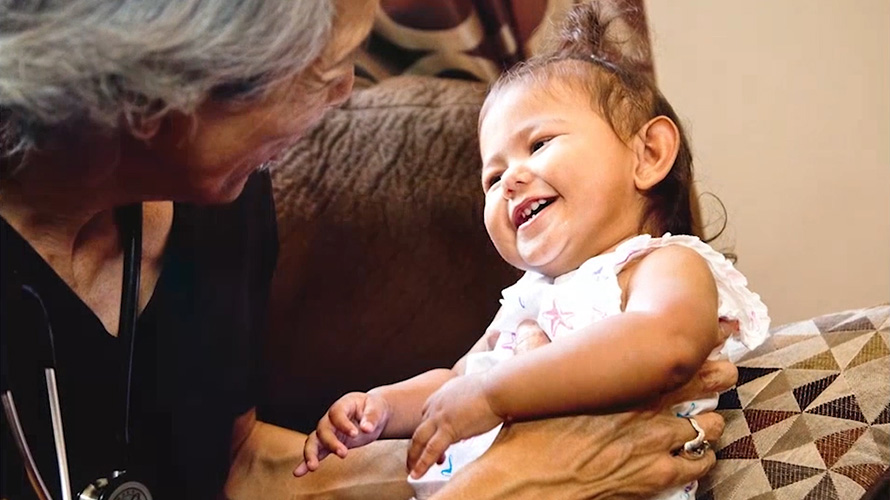 Dying children are hard to talk about, so one pediatric hospice care provider has created a poignant new campaign asking people at a loss for words to donate instead.

TrinityKids Care, based in Southern California, is out with four new ads from TBWA\Chiat\Day Los Angeles, seeking to raise money for the in-home end-of-life support it provides to terminally ill children and their families. The spots share a straightforward tagline: “If you don’t know what to say, give.”

First, a central video tells the heartbreaking story of a family, the Sonnens, whose baby Layla suffered from an undiagnosable disease attacking her nervous system. Her parents, Reese and Matt, handle themselves with incredible grace, explaining how Dr. Glen Komatsu, the medical director of TKC, helped them come to terms with the difficult fact that they were prolonging their girl’s suffering, and how the team’s services helped them be present to say goodbye when the time came.

Two shorter videos, “Ellipses” and “No Comment,” address the challenge of responding to the news via text message and social media that a friend’s child is dying—mediums that are unavoidable in today’s world, but might easily risk feeling impersonal or detached.

The fourth clip, meanwhile, introduces more of the TrinityKids Care staff, and explains further what they need help with—in some cases, paying the electrical bills or getting cell phones for families with fewer means. It drives home one of the campaign’s central points—that even while the organization helps as many as 160 kids a day, there are 10,000 in need just in the relatively local (Los Angeles and Orange) areas it serves.
Overall, it’s a worthwhile approach, in that—even beyond the interpersonal challenges of discussing the topic—it’s also one rarely addressed in public. If the heavy-handedness in some of the creative choices (e.g., euphoric rock music) risks undercutting the touching sobriety of the Sonnens’ testimony more than a subtler approach might have, the point still reads: There’s no good reason parents—at the point when all the miracles of modern medicine have failed to save their kids—should also have to watch them die without professional support.

Even as Jimmy Kimmel rightfully climbs on his soap box about the necessity for all children to have access to life-saving healthcare, regardless of how much their parents make, the argument could be carried even further.

In the meantime, maybe someone should get in touch with Expedia.