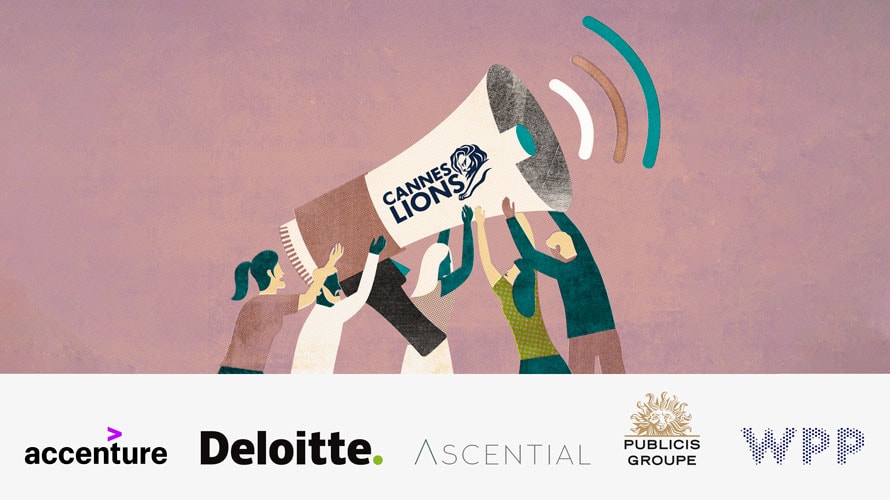 The story may be old, but the trend is undeniable. - Credit by Getty Images, Accenture, Deloitte, Ascential, Publicis, WPP

The tired agencies-versus-consultancies narrative is dead. And maybe it was never quite the right perspective in the first place.

“I don’t think it’s a ‘versus’; I think it’s an ‘and,'” said Mark Singer, principal at Deloitte Digital. “The future of an agency is to look more like a consulting firm.”

But the big billboard on the Croisette in Cannes next week makes one thing quite clear: Accenture Interactive is here to eat your lunch in a digital doggy bag.

The not-quite-new kids in town

This year, Accenture Interactive, which has partnered with Cannes Lions for a number of years, created said “Digital Doggy Bags,” a series of comprehensive overviews of the week’s content. Deloitte Digital, on the other hand, produced a “goal house” around sustainable development goals with various charitable organizations and NGOs and, as the festival’s official sustainability partner, has sponsored a giveaway of reusable water bottles that can be filled at fountains throughout Cannes to eliminate single-use plastic waste at the festival. IBM iX will use its AI program Watson to help festival-goers find specific topics within Cannes’ many panels and speeches.

Accenture's Cannes submissions went from around 150 in 2018 to 500 in 2019, and Deloitte's increased fourfold to 202.
“[Consultancies] send more people every year,” said Philip Thomas, president of the festival’s parent company Ascential. He downplayed the growing influence of these companies, which are several times larger than the biggest holding group, saying they are “still very minor players compared to holding company networks and ad agencies.”

Yet he estimated that entries from Accenture agencies across categories went from around 75 in 2017 to 150 last year. A representative of the firm said the total number more than tripled again this year, with 28 campaigns becoming 90 and total submissions ballooning to 500. Deloitte’s 2019 submissions totaled 202, a fourfold increase from last year.

Recent years have seen the festival add new categories to keep up with the evolution of advertising, such as the Experience Lion and ecommerce Lion—and these are also more likely to align with consultancies’ specialties.

“We’ve acquired many creative agencies over the past year,” said Accenture Interactive head of marketing and communications Mish Fletcher, explaining why the numbers were so much higher. In addition to Droga5, her firm also bought Germany’s Kolle Rebbe and the Netherland’s Storm Digital, among others. “And for the first time this year,” Fletcher said, “we have an Accenture Interactive award entry from Sweden,” in the form of AI project “Memory Lane.”

While Accenture has rented a yacht at Cannes in years past, the doggy bag marks its first large-scale activation. Fletcher said her company saw Cannes Lions as another client, working “in lockstep” with the organization for six months to deliver the concept and “reinvent the festival experience.” Accenture also hopes to help reinvent the agency landscape by formally introducing its newest executive duo, David Droga and Brian Whipple, in one of 10 main stage appearances coinciding with the Interactive division’s 10th anniversary.

But for Fletcher, this year’s most important goals echo that classic BBDO slogan about The Work.

“We’d much rather show than tell; that’s more credible,” she said. And show they will, via eight different yacht-top demos ranging from extended-reality shopper marketing to AI for programmatic buying and esports demos. (“I believe Fortnite has peaked,” Fletcher said.)


Despite its outsize presence this year, Deloitte’s Singer says his company still takes a “strategic” approach to Cannes, one of only a “handful” of events important enough for the firm to attend in a visible way.

“Every year we’re learning more and more and evolving, doing things with purpose behind them; it’s not just a party on the beach,” he said, noting 2019’s green focus, along with a “longstanding commitment to diversity and education” embodied by partnerships with the Female Quotient and Young Lions organizations.

At the same time, he acknowledged the value of having work recognized by one’s peers—hence the dramatic rise in submissions.

The holding companies are holding back

Holding companies approach this new challenge individually: WPP rented a space on the beach for the first time, while Publicis took last year’s zero-budget experience in stride and submitted 50% fewer entries than in 2017.

But investments, overall, are down. Last year’s attendance dropped by an estimated 20-25%, a decline that could not be entirely attributed to the Publicis pullout.

"Our golden rule is if you have a client there or [submitted] work for a big client, then you go. If you don't, you’re probably not going to show up."
Anonymous holding company source
@ErikDOster erik.oster@adweek.com Erik Oster is an agencies reporter for Adweek.
@PatrickCoffee patrick.coffee@adweek.com Patrick Coffee is a senior editor for Adweek.