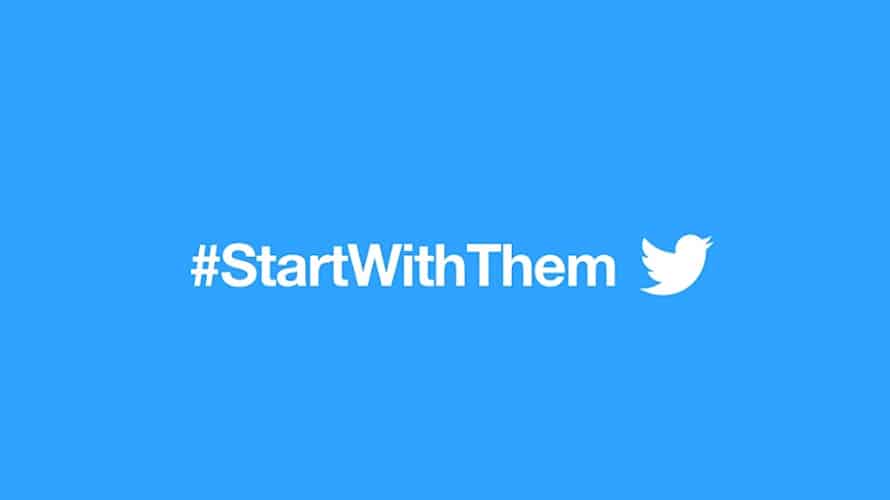 Twitter is known as a critical source of breaking news and journalistic banter—as well as a cesspool for toxic trolls. Now, it wants to reintroduce itself to brands and agencies.

Earlier this month, the company’s marketing team introduced its new self-promotional hashtag #StartWithThem during an extended strategy session. So far, the tag has appeared in a small number of tweets written by Twitter employees, but it has yet to make its public debut.

#DYK Your most valuable audiences are on Twitter, when they’re most receptive #StartWithThem

Learn it. Love it. #OneTeam pic.twitter.com/94N3VKgOBT

While the company has remained vague about its plans, one way Twitter is attempting to implement this image change is through restructuring its internal creative team.

Group creative director Jayanta Jenkins—who joined the company two years ago after serving as global CD for Beats by Dre and working at TBWA, Wieden+Kennedy and The Martin Agency—will move into a new and unspecified role working closely with its top marketing executives.

“We’ve been on an amazing journey in telling our story to the world, and Jayanta has played a key role,” read a statement from a company spokesperson. “He will now be in a new position advising on brand and marketing initiatives, working closely with CMO Leslie Berland and vp of marketing Brad Ramsey.”

As part of the move, Jenkins will relocate to Los Angeles to be closer to the company’s Creative Studio, according to the individual who first brought this news to Adweek’s attention.

The representative declined to elaborate, but people close to the matter stated that Twitter looks to focus on promoting its key point of differentiation: the fact that its audiences are more receptive and active than those on other platforms. For this reason, Twitter wants brands—particularly those in the B2B space—to see it as an effective way to launch new products and campaigns tied to the larger cultural conversations of the day.

According to one party familiar with the company’s thinking, Twitter is not quite ready to roll out its new positioning as a marketing tool.

But this is not the first time the company has redoubled its pitch to marketers. In January, Twitter hired Stephanie Prager as its new agency lead with a focus on video, and earlier this summer, it sent a series of food trucks to Manhattan media agencies in order to promote live video offerings.

So how receptive are agencies to Twitter’s new and revised pitch?

“Are Twitter users more engaged? You could make a strong argument. But are engaged users necessarily more valuable? That’s what Twitter still needs to prove,” said Likeable Media co-founder and CEO Carrie Kerpen, whose agency has managed paid and unpaid campaigns across all channels.

She asked, “If Facebook drives better results on concrete, measurable business actions—then how exactly is Twitter’s audience more valuable? It depends on how brands define ‘value,’ and whether they simply want engagement or something deeper.”

Benjamin Arnold, managing director of We Are Social North America, acknowledged that the company has made “a bit of a comeback” and increased its ad revenue by focusing on live events, which is particularly relevant to sports and entertainment clients like Adidas.

“I think the claim that users are more engaged is tricky one,” he added, stating that the major social networks are “not really comparable” in terms of marketing objectives.

Regarding promoted tweets and other ad options, Arnold said, “I still don’t think they’re there.” But the former JWT account director said he wants Twitter to “find a way of optimizing the ad unit … so that it actually ties into existing behavior.”

“Twitter has become more niche to certain communities and audiences. Within those, it’s very effective,” he said, citing the ad industry’s own use of the platform and speculating as to whether the company might try to compete more directly with LinkedIn.

Given declines in Facebook usership, Arnold told Adweek that he would like to see Twitter’s pitch deck—and the company hopes other agency leaders say the same.