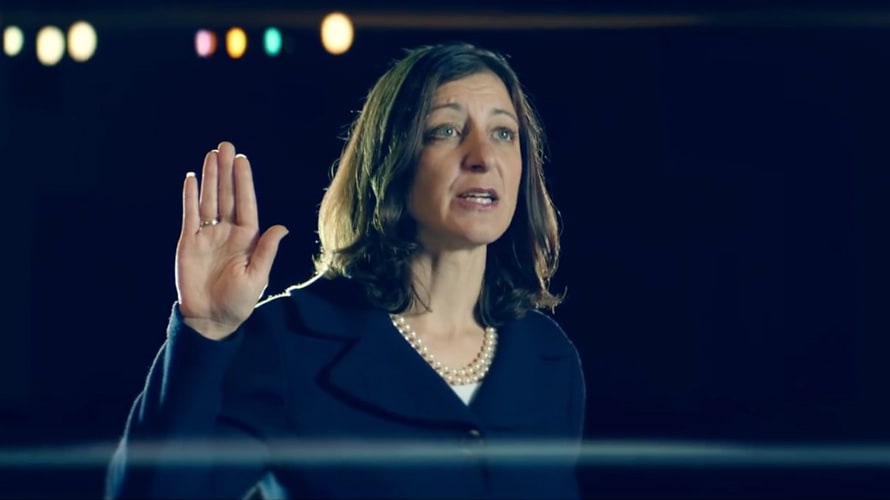 A Virginia congresswoman running for reelection told her story by going back to when she took her first oath of office—at age 17 in the United States Naval Academy.

The spot, from U.S. Rep. Elaine Luria, D-Va., contrasted her commitment to service with a strong message in favor of impeachment proceedings against President Donald Trump, making it a major point of conversation on Veterans Day.

The cinematic spot might be familiar to those who remember the award-winning “Doors” ad for Texas Democrat MJ Hegar, who ran for Congress last year. Focused on Hegar’s story as a woman and Air Force service member who fought for female veterans’ rights, the ad also quickly went viral.

Both Luria and Hegar’s ads were made by Putnam Partners, a firm that makes advertisements for Democratic candidates.

Adweek caught up with the writer, director and producer of Luria’s ad, Cayce McCabe, to hear about the process that went into making it, the state of political advertising and breaking through the noise.

What was the creative process behind the ad for Luria?
This was a very important ad to the congresswoman. She was one of the first frontline members to change her opinion and be in favor of impeachment proceedings when the Ukraine phone call and whistleblower news broke. It’s something that is not political to her. She’s not a particularly political person to begin with, but she is extremely patriotic.

The first time she took the oath of office was when she was 17 years old. She is someone who takes that oath and those words and that promise as serious as anyone. Her district has one of the highest populations of current servicemen and women and veterans in the country. It’s a very important issue to her.

She made this decision to back impeachment proceedings based on that patriotism. This wasn’t advertising decided based on polling or messaging or the goal of the campaign. This is what she wanted to say. This was her wanting to stand out and explain to people why she’s doing this and why she’s not political, but it’s patriotic at its core.

I wanted to do something that was different. There still needed to be a creative hook. I can come out and direct beautiful B-roll and rent lenses I love and use my best DP, but that doesn’t make a great ad. I was still looking for something that was a creative hook, but an ad with patriotism and a nod to the oath and an ode to veterans on Veterans Day that she wanted.

The oath plays such a prominent part in the ad. Why rely on it to carry the story?
She mentioned it so many times. It kept coming back, so I just took out the text of the oath and read it and was thinking about it and thinking about visuals and I really like the reversible poems that are out there. They’re really neat and powerful.

I’m staring at the oath and I’m thinking about how it would be read backwards and where the line breaks would be. I must have played with that for several hours.

Then I said, ‘God this sounds like impeachment if you read it a certain way or with the right inflections, you could be telling the story of impeachment.’ It was just a matter of figuring out the line breaks and figuring out the inflection, the visuals, adding in enough additional news bites and audio that help fill in the blanks and tell the story a little bit more.

Have you found it’s more difficult in such a cluttered media environment for your ads to break through and resonate?
Absolutely. After 2018, there were a number of things that went viral. Everyone tries to outdo each other especially on the Republican side—the ads that went viral on the Republican side were the governor of Georgia holding the gun, or the new governor of Florida teaching his son to say, “Build that wall.” The more ridiculous, the more you get noticed.

We try not to go that over the top. We want to do things that make people want to vote for candidates and are artful and emotional, frankly. We think emotion and authenticity are the two most valuable things you can attach to a piece of creative to help the candidate.

How do you take that into consideration when writing these ads?
The goal really is shareability and to at least try and go viral. That is at the forefront of my head. I want to make something people will want to share—what it is that will make people say, ‘I want to send that to my relatives or post to my social feed’?

With MJ Hegar’s Doors, it was a good story. We thought a lot about how we shoot it and wrote it. The Elaine Luria ad is about its moment in time, less a story, but makes people feel in their gut what they’re feeling in our country. That’s why they want to share it. You’re constantly putting yourself in the minds of people scrolling through their social feed.

How do you think that way of consuming media has changed political advertising?
It has added a layer. It has not supplanted traditional advertising. We still spend the majority of our budget on broadcast television. At the end of the day, 30-second ads on broadcast TV in that candidate’s district are the most important thing the candidate will spend their money on. It moves the numbers the most.

What’s changed is the potential to raise money. [A video ad] gives candidates a lot more money than the candidate expected to raise and gets them a lot more notoriety and builds an email list, and not everybody can do it. And not every video we make can do that. You can’t just say you want to make a viral video.