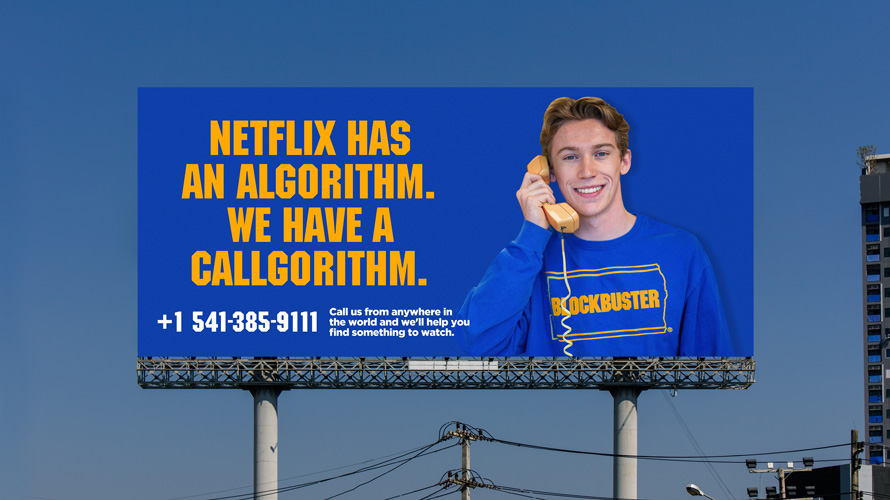 Before algorithms for binge-watching, there was a Blockbuster, the one-stop rental shop lined with VHS tapes and DVDs where customers walked (not logged) in for that night’s entertainment. The friendly sales clerks decked out in blue-and-yellow polos made picking a movie easier, unlike the laborious chore that it is now.

Then, almost all 9,094 locations of Blockbuster shuttered globally; the brand’s sole survivor is clinging onto nostalgia for physical media off a highway in Bend, Ore. When Covid-19 hit, the World’s Last Blockbuster—as it is colloquially referred to— saw foot traffic and revenue fall dramatically, and turned to curbside movie rentals to sustain them through the pandemic. Wanting to help those stuck at home and longing for guidance on what to binge-watch, Blockbuster’s “agency of record,” New York-based creative agency Elephant, came up with the Blockbuster Callgorithm.

“Anyone can call the store at (541) 385-9111, and a real human will give you a movie recommendation for free,” the shop explained in a statement. “Tell us what you like and don’t like, and we’ll give you tailored recommendations. Don’t like the recommendation? Tell us why and we’ll help you find something else. It’s the Blockbuster human touch, now available to everyone.”

A brand that was practically on life-support was an unlikely new client for Elephant, but the agency took a chance on Blockbuster in 2019 after reading an article about the store’s precarious situation in The New York Times. “We started talking about some ideas for them,” Grégoire Assemat Tessandier, president at Elephant, told Adweek. “We called them out of the blue and said that we had ideas that could help their business, and make them a bit of a player in culture and raise awareness through PR.”

Tessandier wasn’t sure what to expect, but by December they were flying across the country to meet Blockbuster’s general manager, Sandi Harding. Tessandier noted how the shop hit the Elephant team with a sensory blast from the past. Not only did this Blockbuster look the same as it did in Tessandier’s memories, it also “had the same smell” of VHS casings and candy.

Shortly after that initial meeting, the brand named Elephant its agency of record.

“We were in the midst of developing a campaign for Blockbuster when Covid-19 hit,” Tessandier said, noting that some of those original ideas had to be scrapped as they would have been “tone deaf” in the midst of a global health crisis. “Quick on our feet and committed to helping, we wanted to highlight the human touch of small businesses, showing that not even a pandemic can stop The World’s Last Blockbuster in Bend, Ore., from delighting customers with awesome movie recommendations.”

Introducing the Blockbuster Callgorithm. Tell us what you're in the mood for, and we'll help you find the perfect thing to watch. Call us today: 541-385-9111. Business hours only.

The campaign rolled out with a billboard in Bend and social posts on the account’s Instagram. The campaign’s visuals feature actual members of the Blockbuster staff and are designed to reflect the new identity of the brand: a small, local family business that has been serving customers since 1991.

“We were over the moon with Elephant’s creativity and idea—letting our guys help out everyone stuck at home across the world,” Harding said.

A Reddit user (pballa2099) spotted the billboard and immediately posted about it on the platform, which has drawn over 50,000 upvotes and almost 2,000 comments. In the thread, one person (earthdweller11), grieved over the loss of their local Blockbuster outpost. “Gods how I miss walking through aisles of videos. It was so much fun. Scrolling through the umpteenth Netflix recommendation just isn’t the same,” they said. Another user (KickedInTheHead) noted that “If you asked most people what was more fun, going to the mall or browsing Amazon, I think most people would say the mall. The experience of it all was robbed from us too.”

While the Blockbuster Callgorithm is free for anyone to dial for movie advice, those who wish to financially support the store can purchase new and retro merchandise on its website.