Automaker Volkswagen announced today that WPP is the winner in the North American region of its global creative review. The holding group defeated IPG, Omnicom and Publicis, which was the other finalist.

It is unclear at this time which shop will lead the account for WPP. A source with knowledge of the matter confirmed that the multi-agency group will be called VW Partnership and that David Miami, Geometry and Possible all played key roles in the pitch.

“As part of the Global Agency Worldwide pitch process the Volkswagen North American Region, comprised of the United States, Canada, and Mexico, has chosen WPP to help take Volkswagen into the future and realize the true potential of this Brand,” said a client representative. “For Volkswagen of America specifically, we are excited about this new partnership and the evolution of our marketing approach through a combination of continued creative excellence and the power of data driven intelligence.”

According to a statement from its headquarters in Germany, VW has now established four regional “powerhouses” in the interest of increasing the efficiency of its marketing programs around the world. Omnicom retained the business in South America and Europe, where adam&eveDDB is lead agency, while Cheil Worldwide will remain lead agency in China, as indicated by the map below. 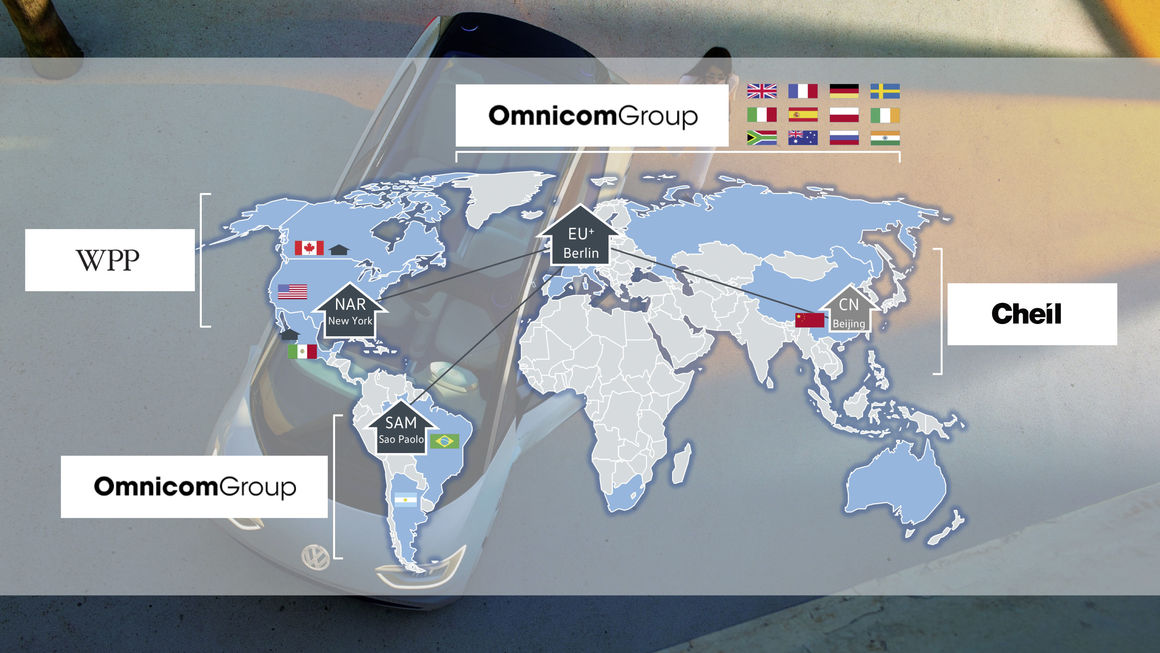 “We’ve spent far too much money on paid media in the past, [and] we want to change that,” CMO Jochen Sengpiehl told the German press in April when announcing the review.

The company’s solution is to reduce its network of “about 40 agencies to three lead agencies” while shifting a greater percentage of its total spend into digital.

“The Volkswagen brand plans to improve its marketing efficiency by about 30 percent by 2020 at the same time as keeping its marketing budget approximately stable at 1.5 billion euros ($1.7 billion),” the statement reads. The portion of that budget dedicated to digital, which was 25 percent in 2015, will be greater than 50 percent by 2020.

The number of individual pieces of content released by Volkswagen will increase “fivefold” as the company looks to connect with consumers in a more personalized way.

“In the past, direct contacts were largely a matter for the dealers,” said Sengpiehl. “In the future, we will personalize our offering to a far greater extent than has previously been the case.”

In 2019, Volkswagen will introduce new models, including the eighth generation Golf and the ID, both of which will be “fully connected” cars. The company also plans to introduce new digital platforms to improve the customer experience and “direct communications between Volkswagen and customers will be managed via a personal customer ID.”

VW is also set to debut a new brand design, and recently announced partnerships with European football leagues, including the DFB and UEFA, will play a significant role in its marketing efforts.

The first of four holding companies to be eliminated from the North American portion of the review were Omnicom and incumbent IPG, whose Deutsch ran the account for more than nine years, weathered the client’s emissions scandal and created the most popular Super Bowl ad of all time with “The Force.”

“Over the past nine years, Deutsch has been a tremendous creative and business partner of ours,” said the VoNA spokesperson. “They have carried on the tradition of great Volkswagen advertising with unmatched passion and dedication. We appreciate all they have done on behalf of this brand. We wish them continued success moving forward.”

Omnicom’s DDB, which led the pitch, saw VW as a potentially valuable addition to its client roster. The agency’s worldwide CEO Wendy Clark acknowledged hiring ex-Droga5 chief creative officer Ted Royer to assist with the pitch over the summer after initially denying that he had worked for her agency. She later stepped down from her role on the Time’s Up Advertising steering committee.