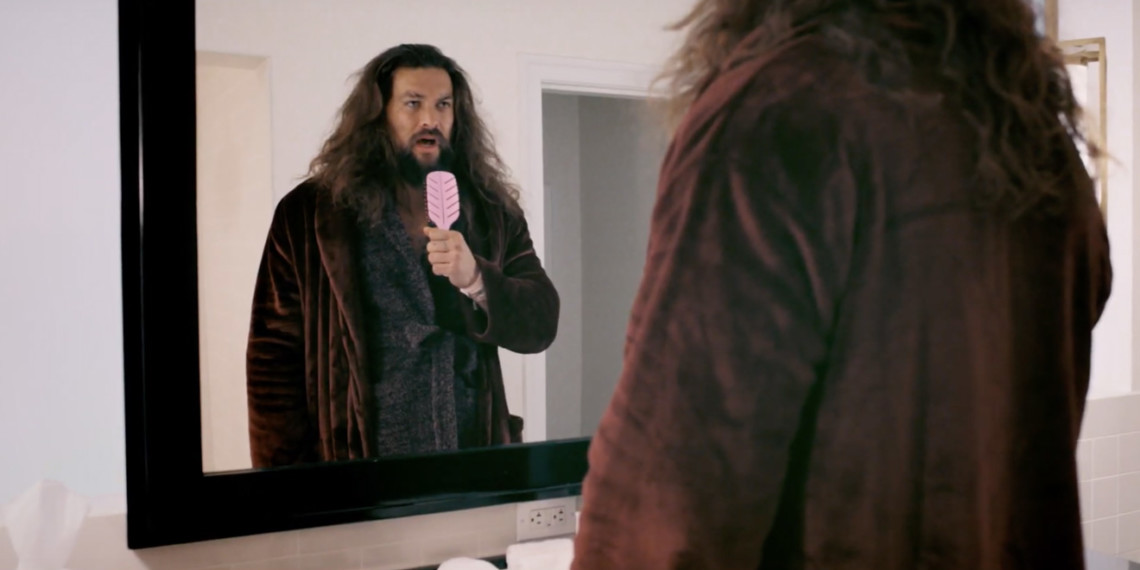 Quicken Loans-owned Rocket Mortgage is back for its third Super Bowl in 2020, this time as the official mortgage sponsor of the NFL—a four-year partnership that the lender announced earlier this month.

In a 16-second teaser released today, actor Jason Momoa stands in front of a bathroom mirror in what appears to be a bathrobe, speaking into a pink hairbrush. Mustering the deepest, most movie-trailer voice possible, he tells his reflection: “You’ve seen him as a superhero. A warrior. And an outlaw. But you’ve never seen Jason Momoa… like this.”

He pauses to clear his throat and sing a high note, then tries that last line again.

In addition to its 300-person in-house marketing team, Quicken Loans worked with Chicago-based agency High Dive on the spot, which will advertise the lender’s Rocket Mortgage brand. It marks Quicken Loans’ first project with the agency, which originally pitched the idea of partnering with Momoa, according to Quicken Loans CMO Casey Hurbis.

“They pitched us this idea very early on with Jason in it; we fell in love,” he said. When the company reached out to Momoa, he also “fell in love” with the idea, according to Hurbis.

Quicken Loans, which surpassed Wells Fargo as America’s biggest lender in 2018, wasn’t willing to share many details on the spot. But Hurbis did say that the ad runs 60 seconds and will air during the first half of the game. The theme revolves around Momoa getting “comfortable” in his home with Rocket Mortgage.

Two years ago, Quicken Loans used the Big Game stage to launch its “Translator Campaign” in an ad that starred Keegan-Michael Key as a translator for the jargon-y language used by mortgage lenders (as well as hairstylists and high-class waitstaff). Big Sean also made a brief appearance in the spot. The brand worked with the Brooklyn and Birmingham offices of Huge on that ad.

In its debut Super Bowl appearance in 2016, Quicken Loans worked with Minneapolis-based agency Fallon on a spot that introduced viewers to Rocket Mortgage, an end-to-end online mortgage buying service that the lender introduced in late 2015.
The lender also launched a Super Bowl Squares Sweepstakes (based on a popular betting game played at Super Bowl parties) earlier this month when it announced its NFL partnership. Rocket Mortgage plans to give away up to $2 million in what it’s calling the “largest official game of squares in Super Bowl history.”

For all the latest Super Bowl advertising news—who’s in, who’s out, teasers, full ads and more—check out Adweek’s Super Bowl 54 Ad Tracker. And join us on the evening of Feb. 2 for the best live coverage of the commercials anywhere.