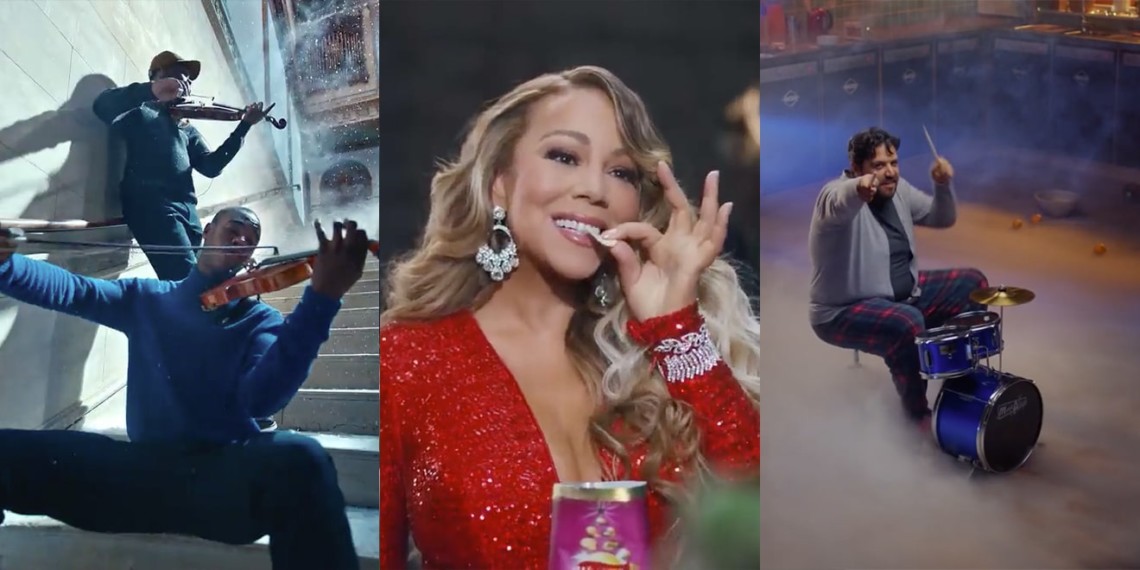 ‘Tis the season for big-budget holiday commercials that string together twinkly lights and heartfelt narratives into striking blockbuster-worthy spots. Get ready to feel the dazzling splendor of Yuletide marketing with our pick of the holiday’s best ads so far—and don’t forget to have a box of tissues handy.

Kevin the Carrot, the most recognizable three-inch explorer and fashion icon of the Aldi holiday advert world, is back for his fourth adventure, but a gang of Brummy Brussels, led by newcomer villain Russel Sprout, pose carotene peril. With the help of Tiny Tom, Kevin escapes just in time to put on an elaborate performance reminiscent of Beauty and the Beast’s “Be Our Guest” at his magical Big Top, encouraging cooks to embrace showmanship during his Christmas spectacular.

Real-life freckled sisters star in this ad, in which a grandfather is still coping with the recent passing of his wife. Together, the siblings join forces in this poignant spot from Apple focusing on how the iPad can bring together families in ways that they don’t expect but can relate to, such as the stress of traveling with kids and grieving the recent loss of a loved one.

With the blend of an expanding set (achieved without CGI), meticulous sound engineering, a 9-year-old drumming prodigy and a bad-ass kit, British catalog retailer Argos released an instant classic for the 2019 holiday season. The familiar, heartwarming daddy-and-daughter story trope is elevated by the concept of a Gen X dad figuratively and literally sharing his childlike wish list dream with his Gen Z daughter to the timeless 1985 tune “Don’t You (Forget About Me)” by Simple Minds.

Well known contemporary dancers such as Jon Boogz, Nataliya Bulycheva, Nardia BooDoo, Yiannis Logothetis, Ron Myles, Marie Louwes, Gregg Aldana and Nico Mark Brown all wordlessly converge together to move in flow within this whimsical, wordless indoor wonderland sporting Banana Republic’s winter line. Len Peltier, vp and creative director of Banana Republic, hopes the ad’s playfulness will appeal to a younger demographic to convey that the brand is for adults of all ages—it just depends on how you wear the clothes.

“The Tradition” weaves a subtle reminder to consumers that Cost Plus World Market sells more than specialty goods in this simple 95-second tearjerker, a profoundly human narrative centered around a dad’s desire to pass on his childhood Christmas customs to his kids. The ad, which was actually released prior to Halloween, will continue to run on the Hallmark Channel and stream across Hulu this season.

Have you ever wondered what Pitch Perfect and A Simple Favor star Anna Kendrick’s favorite things are? Thanks to this delightfully excessive Frito-Lay commercial/micro-musical, now you can—and it’s all set to the iconic Rodgers and Hammerstein tune. Unlike Julie Andrews’ list in The Sound of Music (or Ariana Grande’s in 7 rings), Kendrick’s includes: “Bright yellow Lay’s bags and noses frostbitten,” “Eating Doritos on big comfy couches” and “This Smartfood Popcorn all tied up with strings.” Back in November, Kendrick spoke to us all about her experience on the gloriously campy set.

Hoodies, the staple, cozy go-to item in your closet, are special because they somehow last forever. This sweet holiday campaign from Gap, which diverts from the brand’s recognizable dance-filled ads, takes a hoodie’s inherent eternal memory-making element and makes this unique quality a focal theme as the bond shared between a mother and her son deepens. Per Omit Amidi, creative director at Johannes Leonardo, “The spot aims to tell the story of those intangible moments and touches on the cross-generational impact only a brand as timeless as Gap can make.”

Hobby Lobby, “Christmas Is What You Make It”
Agency: The Richards Group

Instead of showing parents doing whatever it takes to give their children the perfect gift-opening reveal on Christmas Day, Hobby Lobby flipped the script and showed how children can make their parents’ Christmas more bright (and less stressful). In the case of “Christmas Is What You Make It,” the son of a hardworking single mother goes off to Hobby Lobby to buy decorations and surprise his mom with a cheery home makeover.

If your apartment is a dumpster fire and you’re scared of the critic inside your head, wait until you hear what your decor has to say about its living situation. (Spoiler alert: prepare to be roasted.) This hysterical 90-second spot, set to a custom rap track recorded in the style of Britain’s grime artist MC D Double E, exploits “home shame,” an insecurity that can make people nervous about opening up their homes to guests. Other than serving sick burns, the ad focuses on helping you make some quick fixes and upgrades to feel party-prepared at Ikea.

Spain’s Christmas Lottery released four 90-second ads with masterful, touching storylines to promote the “#UnidosPorUnDécimo”—or “United by a Decimal”—campaign. The spot refers to the groups of co-workers, relatives or friends who pool together to buy lotto tickets with the same number. We’ve only included one of the four ads in this listicle, but you can watch all four and look at the other memorable Spanish Christmas spots from recent years.

Unlike most Christmas marketing, which puts a heavy emphasis on holly and jingle bells and vibrant gift wrap, this advertisement starts out gray and grim with a pair of desperate parents frantically looking for their missing daughter at a railway station while “Auld Lang Syne” is eerily played in the background by a busker. Don’t worry too much, though. The twist is that the daughter was buying a meal for the busker at McDonald’s, accentuating the importance of generosity and caring for others during the holidays and beyond.

McCann New York illustrates the magic of breaking past language barriers and acquiring a better understanding of each other in this adorable spot through the eyes of a 6-year-old girl and her newfound reindeer friends. Highlighting how Microsoft Translator (knowledgeable of over 60 languages) can be paired with the Surface tablet to fashion an assistive device, the intrepid Lucy asks a series of questions, translated from English to North Pole reindeer regarding Santa’s sleigh and Mrs. Claus’ cooking chops to her large cloven-hooved pals.

Myer, “Christmas Is Where We Are”
Agency: Clemenger BBDO Melbourne

As a little girl named Sally prepares for a family Christmas camping trip, she begins to worry that Santa will have a difficult time finding her— and it doesn’t help that her jerk brother insists that the jolly cookie craver will never find her. Luckily, Christmas is saved by Sally’s supportive grandfather, who aids her mission by fashioning an elaborate tracking signal bursting through her Christmas stocking. The ad promotes the power of the Myer’s GPS stocking, a Bluetooth-enabled stocking that allows both naughty and nice children to track Santa’s journey, create wish lists using Myer’s inventory of toys and explore interactive maps.

This Smirnoff spot delivers what they called a “holiday miracle” on their YouTube channel: 60 seconds of glamorous partying with “Orange Is the New Black” star and outspoken LGBTQ+ advocate Laverne Cox, stunning in a glittery number as she twirls and mingles about in a series of different rooms where there’s always a fizzy vodka cocktail in sight. This past June, we saw Cox as the face of H&M’s pride campaign alongside internet personality Rickey Thompson.

Instead of a DeLorean hurtling a Cali teen back to the ’50s to make sure his parents fall in love, this Tesco storyline follows a Tesco delivery truck driver’s transcendent journey through a century of British history. Steering from one time warp to another, the delivery man goes through the decades at parties and landmarks, spotting Winston Churchill, a young Queen Elizabeth and the set of the 1980s game show Bullseye along his route.

“Yodelayheehoo” and “ho ho ho” are synonymous in this silly holiday campaign from TK Maxx, featuring a character with an indistinguishable accent that we hope makes an appearance in future advertising for the brand. Titus Klaus Maxximillian, as he’s so named, skis through a purposefully cheesy Alp-like mountain landscape, gifting the friends he glides past along the way with items that are, per TK Maxx, not the “same-old, same-old.”

The United States Postal Service kept its message straightforward and grounded in reality for the holidays this year. Instead of aggressively tugging at our heartstrings like the carrier did in this ad in 2017, it emphasizes its reliability by showing packages being delivered on time, putting huge smiles on the faces of U.S. shoppers from sea to shining sea (and the occasional desert in between).

This year was dubbed in British media as a year when the High Street independent retailer crisis in the U.K .hit its all-time peak, as the proportion of empty shops to up-and-coming ones widened. The context makes this advert, featuring 13 real British shopkeepers coming together to sing Queen’s emotionally-laden “Somebody to Love” as a rallying cry for shoppers to show some love to their local retailers.

An Irish grandfather takes a polar plunge with his granddaughter, a Yuletide tradition they’ve shared together for years. Only this time, the granddaughter is experiencing the brave swim remotely over a video call. The seasonal ad looks refreshingly unaltered and unfiltered, evoking a grounded, relatable sensation of bittersweet sentiment that long distance relatives know all too well when they connect through technology.

Featuring the queen of Christmas herself, this behind-the-scenes angle of an “All I Want for Christmas Is You” shoot features Mariah Carey getting into a tug-a-war tiff with an elf (played by Canadian TV actor Calum Worthy) over a bag of Walkers Pigs in Blankets chips at the snack station. The noel diva triumphantly wins by utilizing her most emblematic weapon, the whistle note, and takes a microscopic bite that only a legend like Carey could derive flavor from.