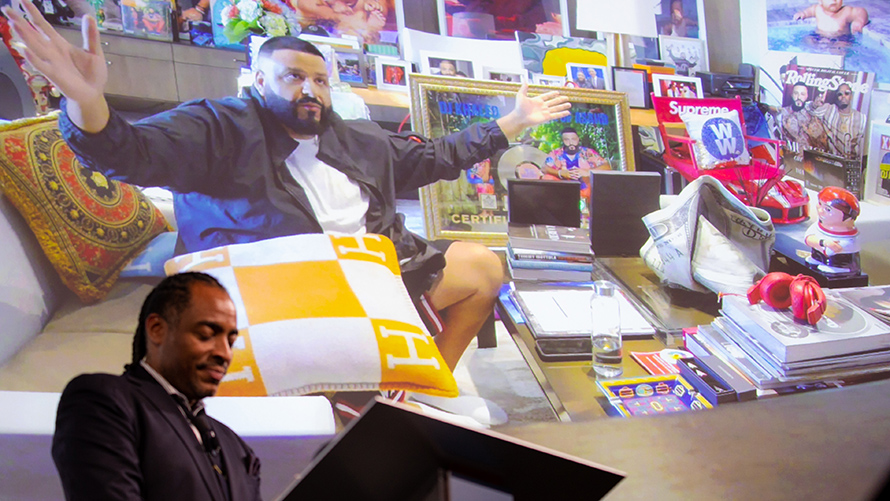 DJ Khaled is the definition of a multi-hyphenate. A musician, a mogul and a master of brand partnerships, this year alone, he’s starred in his first Super Bowl spot and picked up his first Grammy Award. And on Thursday, he video conferenced into Adweek’s Challenger Brands Summit in New York from his home in Miami, giving attendees a glimpse of his office—naturally, it’s decked out in portraits of himself and his son, Asahd, as well as plush Hermès pillows.

During his conversation with Adweek’s chief brand officer, Danny Wright, Khaled dished on his priorities, what he looks for in brand partnerships, his already epic year and more.

Here are five nuggets we learned about the musician:

His top priority right now is his family

Khaled and wife, Nicole Tuck, welcomed their second son, Alam, in January. As such, Khaled said that for the time being, family is his top priority. “Right now, just having a beautiful family, to raise them and watch them smile, watching my kids in the backyard, my family enjoying life, that makes me inspired,” he said. “When I see them smile and my family’s good, that’s my motivation, that’s my energy, to go out there.”

When he makes music, it needs to speak to him

Discussing his creative process, Khaled said that it all comes down to the music. “The music has to be able to speak really not only to me, but hopefully to you,” he said. “That really is the most important thing.” He wants to make music that motivates people, makes them happy and makes them feel energized—music that will move people.

“I’ve always wanted to do a Super Bowl commercial,” Khaled confessed. He starred in Hard Rock’s first-ever Super Bowl ad alongside Jennifer Lopez and Alex Rodriguez in a heist-inspired spot directed by Michael Bay. “It was just incredible accomplishment,” he said.

He wants to work with brands he loves

Khaled has taken on partnerships with brands like Cîroc, Luc Belaire and Jordan, and he says that loving a brand is top of mind for him when deciding whether a partnership is worth doing. And it’s not just because he feels that way—it’s because his fans feel that way too. “I feel like the consumer, the fans and the people that support the brand, feel the same way,” he said. “They have to love it.”

Above all, he is himself

The secret to Khaled’s success—and perhaps why 18.6 million and counting are following him on Instagram? “For me, I always be myself,” he said. “I think that’s major key. That’s authenticity.”