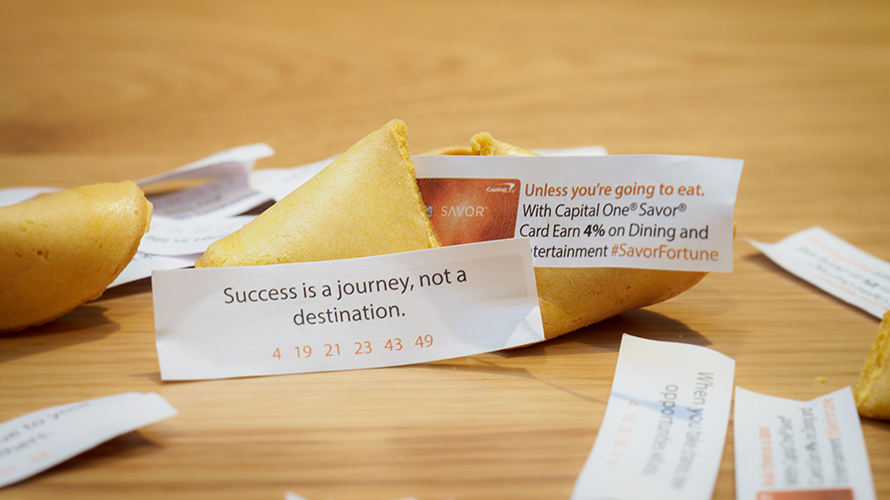 The future includes an ad—at least, according to millions of fortune cookies currently being rolled out in Chinese restaurants across the country. These cookies are the work of Open Fortune, a company that prints ads on the other side of those slips of paper you find inside fortune cookies, putting marketing into what has long been an ad-free experience.

Open Fortune’s product has already caught wind on social media: A tweet featuring one of its ad-covered fortunes has received over 10,000 likes, and a similar Reddit post has over 3 million views. Recent brand partners include the Missouri Lottery, Capital One and Bloomingdale’s.

Founders Shawn Porat and Matt Williams first hatched the idea for the company seven years ago, and officially got it off the ground about a year and a half ago. They saw an opportunity in putting an advertisement in a fortune cookie because it offers not only a captive audience, but a willing one: Open Fortune’s website boasts a 98 percent open rate. And because of the unexpected nature of the ad, it also means that it stays with people—the company also claims a 95 percent brand recall. The sheer number of fortune cookies that are being handed out on a daily basis in the United States, too, represents practically unlimited potential—and unlimited eyeballs to place a brand’s message in front of. That includes 19,000 Chinese restaurants Open Fortune counts as partners (who are able to buy the cookies at a lesser cost than normal, thanks to the financial contributions of Open Fortune’s clients.)

“There’s over 300 million fortune cookies distributed every month across the United States,” Porat said. “There’s a lot for us to saturate.”

And there’s a history of sharing associated with fortune cookies, too, that allows for natural conversation to develop around the ads. Through his own research, Porat said the team was able to dig a bit deeper into the little rituals that have developed around fortune cookies. “They said since they were kids, they were taught by their parents to open up the cookie and read it aloud,” he said. “And then they say, we know what’s going to happen next week.”

The most amazing thing about Open Fortune’s recent brush with viral fame? That campaign, for Capital One to promote its Savor card, which specializes in cash back on dining purchases, was only just entering the market. Eventually, there will be 10 million of these ads distributed to Chinese restaurants across the country, but at the time of the initial tweet, only 5,000 had been in circulation. Once more and more cookies pour into the market, the opportunity for viral moments will continue to grow.

Ad blockers ain’t got nothing on the nyc take out market. pic.twitter.com/Q6WUnu5qTX

“From an impression standpoint, it’s complete insanity,” Williams added, saying that the most unique element of Open Fortune’s business model is that the reach potential is the same as you’d get with a tech giant, but it’s done in a way that doesn’t require a consumer to be on their phone or computer. “Tech platforms are allowing those kind of impressions, but this is done in an analog way.”

Porat and Williams say that their product doesn’t seek to get rid of the message you expect to see when you crack open a cookie, but rather it adds to it. Both insist that their fortunes will always feature an actual fortune and the accompanying lucky numbers. However, they have found that they can cater the fortune to correspond with the brand message. An example Porat provided is a fortune that reads “If you got it, flaunt it.”  On the other side of the slip, Capital One’s offer of four percent cash back is written alongside the ad copy: “Flaunt what we gave you.” (Each campaign, however, will have a wide variety of different fortunes—at least 100.)

“We help the brand tailor the message and add one line punches to the portion on the bottom,” Porat said. “It’s all about having a little fun with it.”

Though Porat said they are open to expanding into non-traditional formats beyond the fortune cookie, it’s tricky to find another medium with the same potential. “It’s tough to figure out what other media platforms can compare to it,” he said. “You really don’t have that surprise and delight, where people have an intent to open and read it without expecting that brand message there.”

With client bookings already racking up for 2019, even Porat and Williams likely won’t need a cookie to figure it out.