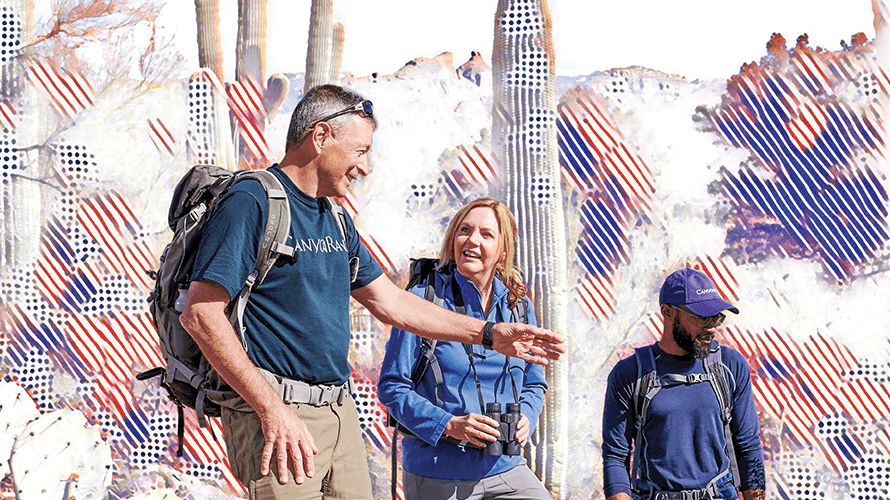 A grab from one of ADP's new print ads (full version below) shows the influence of AI.
All images courtesy of ADP
Share
By Robert Klara
|
March 25, 2019
Share

The average working stiff might not be able to tell you what ADP does, but there’s a decent chance the company affects him in a very important way—namely, it gets him his paycheck.

In fact, ADP (which stands for Automatic Data Processing) pays about 40 million workers worldwide, and one in 6 of us in the U.S. It also provides an entire suite of services in the field of HCM (Human Capital Management), including 401(K) and health insurance administration.

But in recent weeks, and with a creative assist from Havas New York, ADP has been preparing to send a new, broader message—this one concerning the meaning of work and the future of the workplace itself. Harbingers of that initiative were on view two weeks ago at South by Southwest. Attendees to the Austin, Texas, tech and culture colloquium were given the chance to smash a piggy bank (a symbolic act of protesting wage inequality), break a glass ceiling and generally destroy a number of objects commonly associated with the confines of traditional office life. The fact that an HR services company would even care about such issues was a signal that ADP is broadening its brand and its image.

As of this morning, the general public will get to see what that broadening looks like. In conjunction with debuting an updated brand identity, the company is also launching a new campaign for TV, print and radio that asks a pretty loaded question: “What are you working for?”

That forms the foundation of other marketing components previously released, including a company “manifesto” that ran in major newspapers and digital out-of-home installations in places like Penn Station in New York.

“Most companies will recognize ADP for our core business around payroll, but we believe that work is about more than getting paid,” CMO Lorraine Barber-Miller told Adweek. “That’s why we [adopted the question]. What are you working for? What is your ambition? What’s behind why you wake up and go to work?”

It’s a good bet that America’s jaded cubicle drones would simply respond, “the mortgage” or “the car payment.” But ADP is evidently serious about engendering introspection about what work means to people and the deeper reasons we do it. As its manifesto sets forth, work is “about achieving something greater”—greater, in other words, than just a paycheck.

To support that message, ADP’s new TV spot features the owners and employees of some of its actual client companies talking about what motivates them to go to work. Examples include a strapping man named Stefan, who runs Tabacso’s mash warehouse, and says, “I’m working to keep the fire going for another 150 years.” Or Valerie, a L’Occitane boutique manager, who tell us that she’s “working for beauty that begins with nature.”

The broader question here, of course, is why would a HR solutions firm concern itself with these existential questions? Well, for one thing, a brand redefinition was overdue. ADP turned 70 this year and, to hear Barber-Miller tell it, a company exercise in self-reflection led to ADP’s own leadership asking what they themselves were working for. “Really, that’s how the entire brand platform and campaign was born,” she said.

Perhaps more to the point, ADP is in the process of evolving from a strictly business-to-business brand to what the CMO calls a “b-to-b-to-c” brand. The shift comes in the wake of recent ADP acquisitions such as its 2017 purchase of Global Cash Card, which allowed the company to offer its Wisely Pay card and put the brand in a more consumer-facing position.

Barber-Miller demurred over the specifics of how a company best known for payroll processing will fulfill its manifesto to “design a better way to work.”