Plus, Brand Visionary Chrissy Teigen and a Brand Save nod to the determined duo behind Stand Up to Cancer

vp, marketing acquisition, Hims and Hers

It’s safe to assume that most dudes would prefer not to look someone in the eye when discussing their erectile dysfunction. Actually, they’d probably prefer not to talk about it at all. But Hims is here for them. The telemedicine brand offers online access to an extensive network of over 200 licensed healthcare providers, resources and products for medical conditions that most guys would rather not admit to—and it does so with honesty and even humor.

By openly talking about the unpleasant issues that a striking number of men encounter, Hims has been able to “create awareness about these traditionally stigmatized conditions, normalize them and get men to be proactive about their health,” says Emily Boschwitz, vp of marketing acquisition at Hims and Hers (Hers is Hims’ sister brand).

Not afraid to be prickly

While one might expect a light touch when talking about ED, the Hims brand is memorable for imagery that includes a flaccid cactus against a millennial pink background—a visual metaphor so clear in meaning that no explanation was needed.

That irreverent approach connected powerfully with consumers. Boschwitz says the brand saw $1 million in revenue in the first week after its launch, and sales have continued to grow. Hims has also attracted over $200 million in funding to date and has fulfilled more than 1 million orders since launch.

Key to the brand’s success is showing just how common issues like ED and hair loss are. Recent advertising efforts have splashed statistics—56% of men suffer from hair loss by age 35, and 40% of men under 40 struggle with ED—in public places like subway stations and city centers that reach the brand’s wide demographic (roughly characterized as all men).

Eyes on the prize

One way to get men to connect with a message about something they’re avoiding is to capture their undivided attention—like with restroom takeovers. “We’re always thinking about where the consumer’s eyes are and where they have 30 seconds of uninterrupted time,” Boschwitz says with a chuckle. In the summer, Hims has flown banners over beaches, hoping to attract the gaze of prone sunbathers.

Boschwitz says that over the last year, her team has launched more than 50 channel tests—ranging from city takeovers (a Bryant Park subway in New York) or neighborhood dominations (like in San Francisco), always leading with stats in order to create awareness. Partnerships with influencers such as Dax Shepard and David Dobrik lend the brand authenticity and visibility. And on social, where Hims and Hers collectively have more than 200,000 followers, men have posted about unboxing products and given in-shower shampoo reviews. “It’s incredible this community we’ve been able to foster around conditions that were totally taboo two years ago,” notes Boschwitz.

A future in females

In late 2018, the company ventured into women’s health, with Hers. While the mission was similar to Hims’, the tone was different. Since its launch, Hers—where topics include birth control, female sex drug Addyi, hair-loss products, vitamins and skin care—has facilitated more than 50,000 patient/doctor interactions on the platform.

“We knew that women were already seeking care, but they weren’t getting what they need,” says Boschwitz. “We took a more direct and informational tone with Hers that allowed us to create trust with our consumers that they can come to us for a more beneficial experience.” —Rae Ann Fera 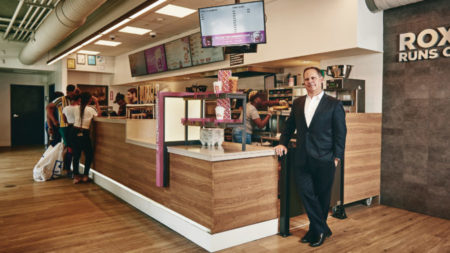 The man who dropped the 'Donuts'
Tony Luong for Adweek

When Digitas veteran Tony Weisman landed the job of CMO of Dunkin’ Donuts in 2017, he inherited responsibility for the look, feel and personality of a 67-year-old doughnut chain. The only problem was, well, that “Donuts” thing.