After 130 Years, the Flexible Flyer Is Still the Cadillac of Sleds

Even if you've never heard the name, odds are, you know the vehicle 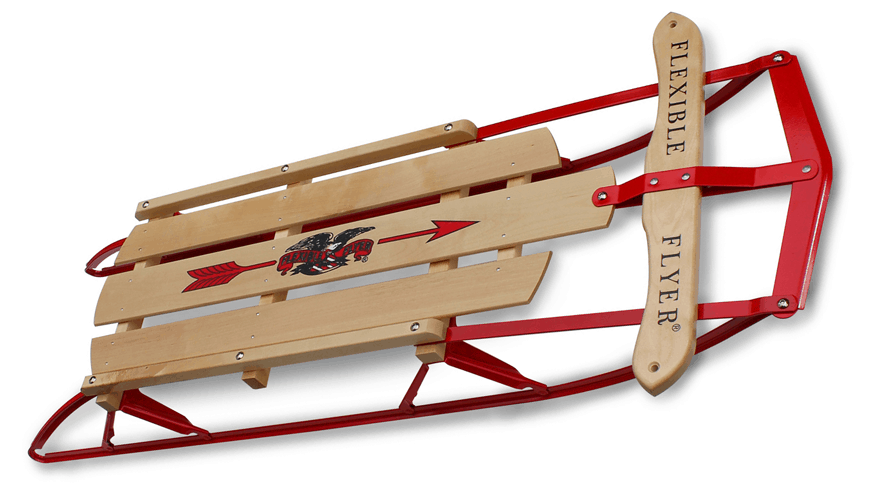 According to the National Oceanic and Atmospheric Administration, the country is just now shaking itself off from the snowiest period of the year. That makes it peak season for sledding—an activity for which NOAA keeps no statistics, though it’s a good bet that most kids in snowy regions (and a goodly percent of their parents) are busy doing it. Chances are, too, that they’re using one of those $34 plastic sprinters or discs purchased from the likes of Walmart and Amazon.

And, of course, there’s nothing wrong with that. 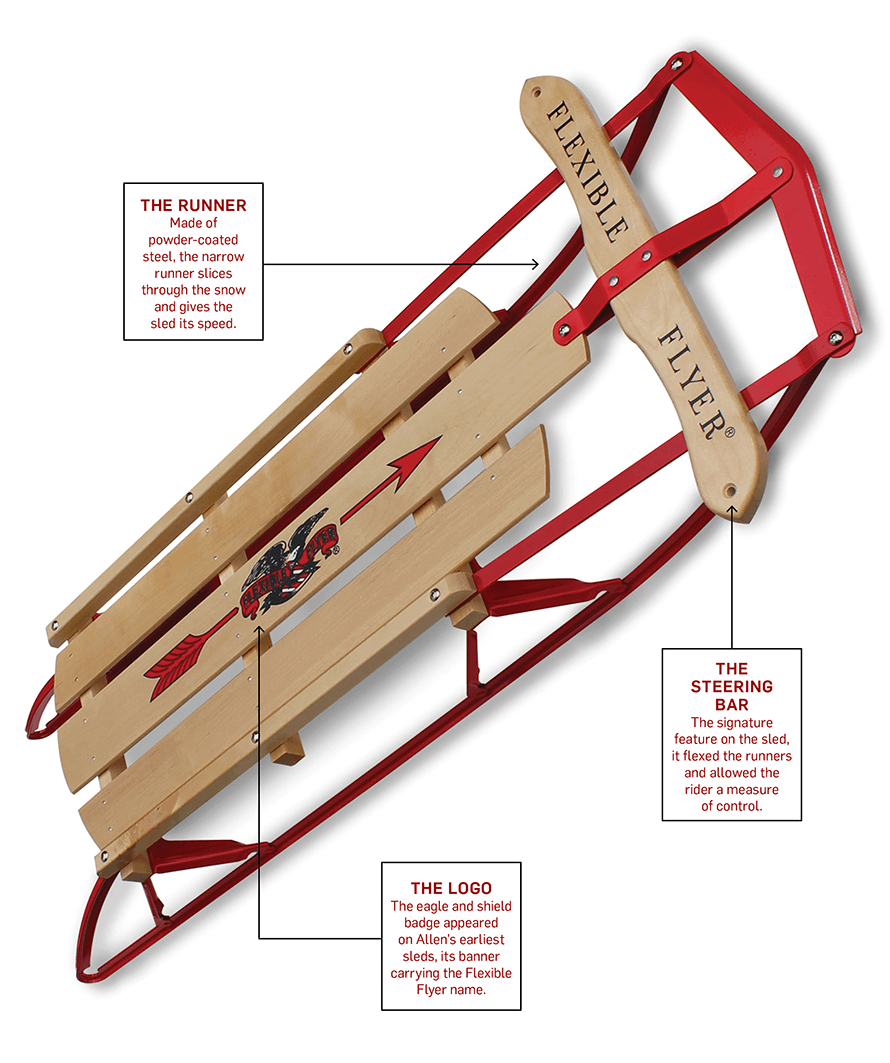 But among sledding’s true connoisseurs, the thrill of gravity and crystallized water vapor sending you careening down a hill can be entrusted to but one kind of sled, the kind that speed demons have sworn by for 130 years: the Flexible Flyer. 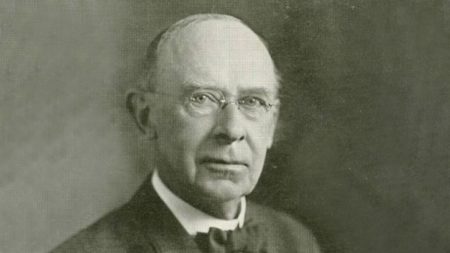 Even if you’ve never heard the name, odds are, you know the vehicle. It’s the Cadillac of sleds, and the Sherman tank of sleds, too. It’s the hillside thoroughbred with the hardwood deck and the steel runners painted fire-engine red. While a plastic disc weighs a few ounces, a 60-inch Flexible Flyer tips the scales at 14 pounds. It’s long, imperious, fast, and—to the relief of anyone who’s actually gone downhill on one—it’s actually controllable: The wooden crosspiece in the front bends the metal rails in the rider’s desired direction. And while injection-molded plastics have introduced some bizarre shapes to the hillsides, the steel-runner sled is a classic upon which technology has been able to add little. The Flexible Flyer has barely changed since the Victorian era.

And it’s still selling. Tom Morton is a fifth-generation sled maker and managing director of Paricon Sleds, a Maine concern that holds the exclusive rights to make the Flexible Flyer. A Flyer from Morton’s company will set you back $85, but the orders keep coming. “It’s still a good market for us,” he said. “Attention is still prevalent, and [the sleds] continue to sell—that’s key to the strength of the brand.” 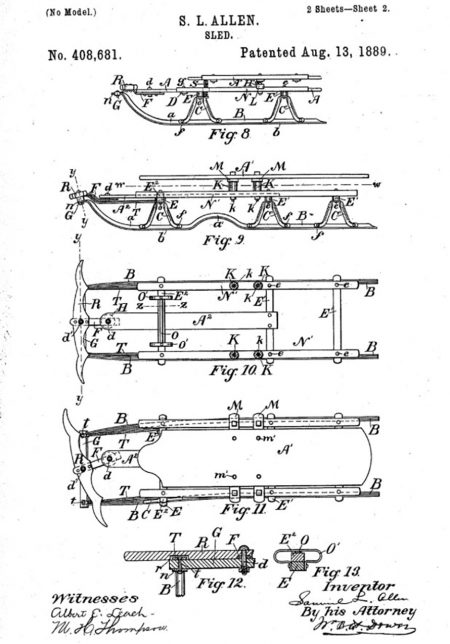 His design for the Flexible Flyer (right) secured a U.S. patent in 1889.

The brand itself dates to 1889, when a Philadelphia manufacturer of farm and garden equipment named Samuel Leeds Allen secured patent No. 408681 for a steel-runner sled equipped with a steering bar. Originally, Allen began making his Flexible Flyer sleds as a way to keep his factory employees on the payroll through the winter season when demand for gardening equipment fell off. But after leading department stores like Macy’s and Wanamaker’s began stocking them, the Flexible Flyer became Allen’s core offering. By 1915, S.L. Allen & Co. was selling 2,000 sleds every day. 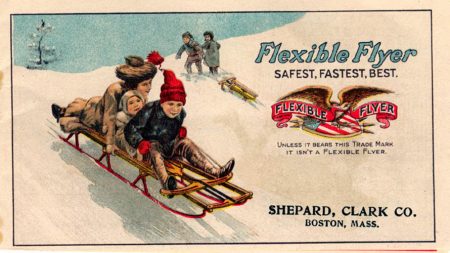 Today, the Flexible Flyers made by Paricon Sleds are identical to ones that Allen’s factory turned out a century ago, when ads like this one made the sleds one of the most popular toys in America.

Foreign competition and the rise of plastics spelled the end for the company, and the Flexible Flyer name passed through a series of owners in the 1970s and 1990s. But in 2005, Paricon—which has been in business since 1861, making a sled called the Speedaway—stepped forward and purchased the rights to Allen’s old trade name. Today, Morton’s sleds are as close as you can come to an original Flexible Flyer. Actually, he specifies, “they’re identical—there’s no change to them. They’re made the same way, with the steel runners and knees—the triangular piece that connects the runner to the wood deck. [And] we use birch—North American birch.”

Who’s still willing to pay close to a hundred bucks for a steel-and-wood colossus? Well, kids—the gray-haired kind. “It’s parents and grandparents,” Morton explained—people who “want their kids and grandkids to have that nostalgic experience they did.” 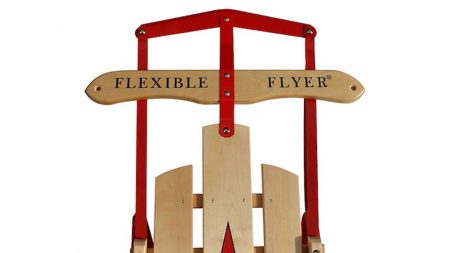 In the 1920s, Flexible Flyer stressed steering’s role in a sled that was “safe,” in addition to being “swift and handsome.” And Morton still stresses the same attribute. “Today,” he said, “a steel-runner sled is probably the most controllable sled you’ll find on the hill.”
Click for more from this issue
This story first appeared in the Feb. 4, 2019, issue of Adweek magazine. Click here to subscribe.
Share
https://adweek.it/2RRjXwG