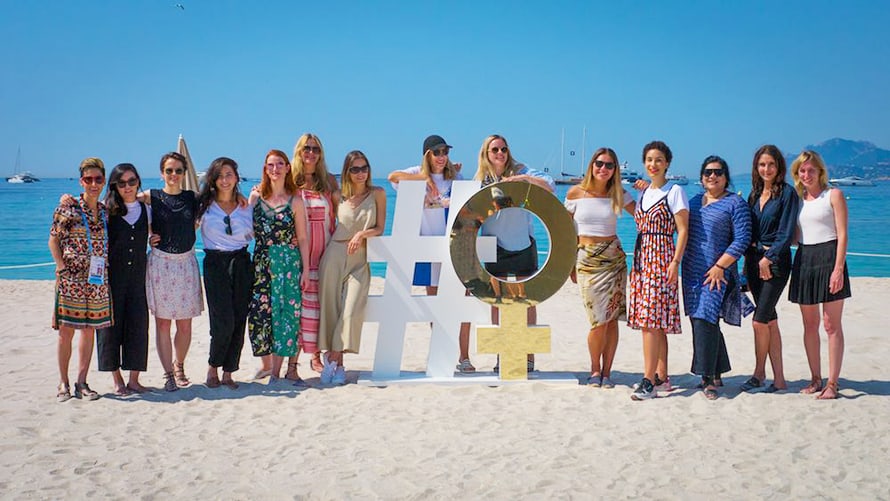 Free the Bid directors celebrated on Twitter beach at the Cannes Lions Festival of Creativity. - Credit by Ben de Montagnac

CANNES, France—Procter & Gamble, the world’s largest advertiser, plans to invest in nonprofit Free the Bid with HP and Publicis so that the companies can help double the number of directors and broaden the effort to 20 more countries in the next three years. That announcement could significantly change what the industry is like for female directors—and that was just one of the initiatives Free the Bid pushed to make sure female directors were seen and heard during the Cannes Lions Festival of Creativity.

To combat the lack of women directors featured on panels, the group reached out to Twitter to see if the company would host a gathering at Twitter Beach on Thursday morning. After a quick yes from Twitter CMO Leslie Berland, who had already used the beach to give female voices—including actress Kerry Washington—a platform with #HereWeAre, the team was able to set up a space to celebrate female directors at Cannes.

“We created #HereWeAre to elevate and amplify women’s voices especially in industries where they’re not often enough seen, heard or recognized,” said Berland. “The #HereWeAre conversation ignited in January and grew organically. We recently held events in Canada and now here at Cannes, building on the momentum. We will continue to spotlight women who are both in front of the camera and behind, across industries and walks of life. We’re all in this together.”

"No one wants to be thought of as a woman director. She’s simply a woman who is a director."
Adweek caught up with Free the Bid executive director Emma Reeves at the event to learn more about the P&G support, what the nonprofit has accomplished with HP and its goals for the year ahead.

This conversation has been edited and condensed for clarity.

Adweek: What does the HP and P&G support do for Free the Bid?
Emma Reeves: That will open so many doors to other brands and, beyond that, to all their agencies. We will be strategically growing globally as part of our pledge to work with brands that produce globally, to find women in all corners of the world who will be able to compete and bid actively for commercial work. That’s our commitment—we want women to have a voice everywhere, and where there are fewer women available we will focus on those areas and mentor, educate and bring women up so they can also have a voice. Lucio, as someone who’s been committed for a year and a half, made very clear that diversity is better for business across the board.

What does that mean?
Specifically, he announced that, because of his commitment to Free the Bid, and because of all the agencies he works with were really monitored … [the company] got better and better at including women. He went from zero percent of his directors being women on his commercials prior to November 2016 [to having] from November 16 to May 18 [of this year] paid for 53 commercials, 59 percent of which were directed by women. He did not set a quota. This was a fair competition. Given that 85 percent of consumer decisions are made by women, you will make better marketing decisions when speaking to them.

That’s such a dramatic change.
That’s where we are; with advocates like that, we’re in a really good position for big expansion. Already we’ve had several brands emailing us since I’ve been here with Pritchard and Lucio, who are leading the way. Leslie Berland from Twitter has been involved for quite some time. We are grateful to be hosted here today [by Twitter].

Because women are so underrepresented in Cannes, I only now started to realize how many women directors are here. They are not visible. They are not being invited to present on the stages. I decided that I would start figuring out how many were here. More came forward, and our network was so strong that more women were able to turn up today at an event that Twitter has very graciously hosted at short notice. I can’t even count how many women are now in the photos.

Why do you think women—specifically female directors—aren’t represented at Cannes?
It’s part of the systemic bias in the industry … we hope more women are going to start winning the jobs and the awards. … It’s about the creativity and the quality of the work. … but it’s not really a level playing field. Creativity is genderless, but opportunity is not.

Winning an award doesn’t necessarily guarantee you anything. It does put a spotlight on you, but then the industry needs to step up and support that award winner. If we keep up the demand, the supply can actually survive—and the demand comes from the big brands, their agencies and their production companies. We have to systematically look at every part of the cycle.

What do you wish people understood about female directors and the importance of representation at Cannes?
There’s no unified way a man directs or a woman directs. No one wants to be thought of as a woman director. She’s simply a woman who is a director.