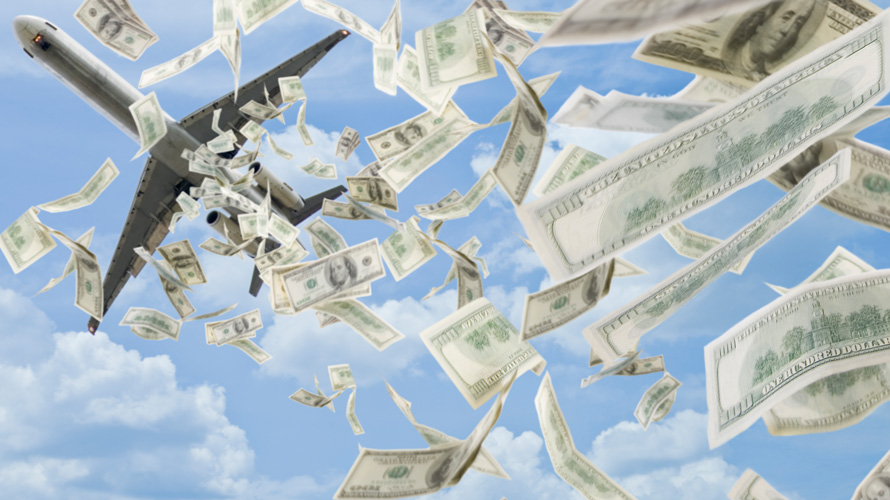 Airlines will receive a bailout amount that is over three times as much as what it received following 9/11. - Credit by Getty Images

America’s airline industry will be getting the bailout it asked for.

Despite ironing out a few details regarding unemployment, Congress has agreed to pass a $2 trillion stimulus bill this week that will help lift the economy through the disruption and turbulence caused by the ongoing coronavirus pandemic. The agreement was announced late on Tuesday evening.

After partisan debate pushed the vote through the weekend, congressional leadership is expected to pass the Phase Three bill, the third iteration and largest relief package associated with the coronavirus pandemic, which aims to provide more than $500 billion for corporate business, more than $360 billion for small businesses and a one-time check of $1,200 for every American who makes less than $75,000.

More specifically, it was reported that airlines will get $25 billion in grants to “exclusively be used for” employee wages, salaries and benefits as well as an additional $25 billion in loans. However, for access to the grants, airlines may have to provide equity ownership to the government. Recipients of the grants and loans would be barred from employee layoffs until Sept. 30, according to Forbes.

This idea was first floated by President Trump last week, who said during a press conference that he would consider taking equity in the companies set to receive the bailout.

As early as March 21, 11 of the top U.S. airline executives, including Ed Bastian of Delta, Oscar Munoz of United and W. Douglas Parker of American Airlines, sent a letter to Capitol Hill leadership detailing their demands. In the letter, the airlines said that if they were given the $58 billion they asked for—half in grants, half in loans—that they’d hold off on layoffs until Sept. 1. Additionally, the airlines would commit to placing limits on executive compensation and eliminate stock buybacks over the lifespan of said loans.

“Time is running out,” the letter read. “Over the past week, we have communicated to our employees the dire situation we are in and the potential impacts on them if our government doesn’t step up to help. Unless worker payroll protection grants are passed immediately, many of us will be forced to take draconian measures such as furloughs.”

While the airlines have asked its employees to take “voluntary” unpaid time off, they’ve yet to go through full-scale layoffs, even as almost every major American carrier slashed their capacity.

The total bailout dwarfs the bailout the airline industry received after 9/11, which consisted of at least $10 billion in loans and $5 billion in grants. Of course, though, the fallout related to coronavirus could be much steeper. Originally, the International Air Transport Association, one of the industry’s trade groups, reported that damage could total somewhere between $63 and $113 billion. On Tuesday, the group pulled that initial analysis, saying that revenues could plummet as much as $252 billion.

Meanwhile, after Marriott, the world’s largest hospitality brand, announced that it would be furloughing “tens of thousands” of employees, it later announced that these cuts would extend to its corporate office in Bethesda, Md., where more than two-thirds of its employees would also be furloughed. Hilton Hotels and Hyatt also announced furloughs over the weekend.

The American Hotel and Lodging Association estimates that without aid, close to 4 million jobs will be eliminated in the hospitality industry within a few weeks. It’s still unclear whether the hotel industry will receive the same treatment allotted to the airlines.