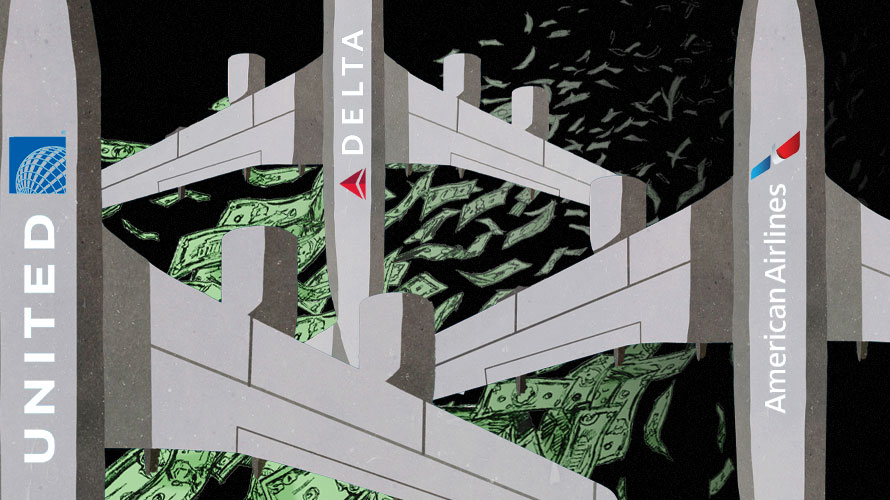 All major U.S. carriers have either already accepted bailout funds, or are in the process of negotiating their deals. - Credit by Photo Illustration: Trent Joaquin; Source: Getty Images, United, Delta, American Airlines

Within an hour of announcing that they’d be accepting their share of the record-breaking multitrillion-dollar stimulus package, major airlines including Delta, United, Southwest and American all thanked Congress for the influx of cash.

The common theme? They’re grateful for the financial boost, which they say was critical to their survival. In exchange for the grants, airlines are prohibited from furloughing their employees, as well as cutting pay and buying back shares. There will also be limits in place on executive compensation.

Other proposed conditions, such as the elimination of baggage fees and carbon emissions reductions, weren’t included in the final legislation, though they had been floated nearly a month ago during deliberations.

While the Treasury Department did not include the individual amounts the airlines applied for, almost all carriers have made their own finances public.

The original $2 trillion stimulus bill had earmarked $25 billion in grants and $25 billion in loans for airlines—but the grants came with the aforementioned strings attached. After initial reports suggesting that airlines had balked at giving up equity, ultimately almost every major U.S. carrier agreed to take the cash in exchange for some portion of equity.

“We are extremely appreciative of the work of our federal leaders,” said Southwest chairman and CEO Gary Kelly in a statement. “As we are now in the implementation phase of the Cares Act, we applaud the quick action by the U.S. Department of Treasury to infuse liquidity into the economy and try to keep businesses open and people on the job.”

In the same statement, Southwest announced that it would receive $2.3 billion in grants to meet its payroll obligations and an additional $1 billion as a loan. The government also has the option to buy up to 2.6 million shares of Southwest’s stock, although it hasn’t said how much—if any—it will take.

“We thank Congress and the administration for quickly passing legislation to protect the paychecks of tens of thousands of United Airlines employees,” said United in a statement. “This financial support is critical to our people, who are ensuring air service to communities throughout the country and supporting the shipment of much-needed medical supplies and travel of health care professionals around the globe.”

American Airlines announced that it would be receiving a direct grant of $4.1 billion and an additional $1.7 billion in loans.

In a letter to staff, JetBlue CEO Robin Hayes said he had some “very good news to share.”

“This law does not solve the long-term problems that the coronavirus pandemic is creating, but it buys us some much-needed breathing room,” Hayes said, noting that the airline would receive grants totaling about $685 million and a $250.7 million loan.

While the grants and loans will provide some immediate relief, it’s unclear what levels of staffing the airlines will have to commit to—particularly as the global travel industry has catered, with almost no demand for flights. Even Hayes admitted that there’s less work to be found in his own statement.

“With flights below 150 daily and our aircraft now only about 10% full, we will have far less work and fewer hours for every salaried and hourly crew members,” he said. “I know this adds financial stress at a time when we are also worried about each other’s health and safety, but I am thankful we are in a position to provide some level of pay for everyone using the payroll support funds.”

Delta CEO Ed Bastian made similar comments in his own statement, saying that the airline was still looking for employees to take voluntary furloughs.

“We still need volunteers to consider short- and long-term leaves of absence,” Bastian wrote. “You’ll continue to receive all of your benefits, and your job will be waiting for you when you return. So please think about whether leave is right for you and your family—it is a vital part of our effort to safeguard Delta jobs.”

In the statement, Bastian also announced that Delta had reached an agreement for $5.4 billion in relief, $1.6 billion of which is a 10-year low-interest loan. The government will also get 1% of Delta’s stock, which it can hold for five years.

“The funding, along with self-help measures we have taken, will prevent furloughs and pay rate reductions through the end of September, despite the 95% drop we’ve seen in passenger traffic,” said Bastian in a written statement.

The coronavirus crisis is expected to cost the international airline industry more than $314 billion in revenue this year, a drop of 55% from 2019. The industry may not recover completely for up to two years, according to aviation analysts.