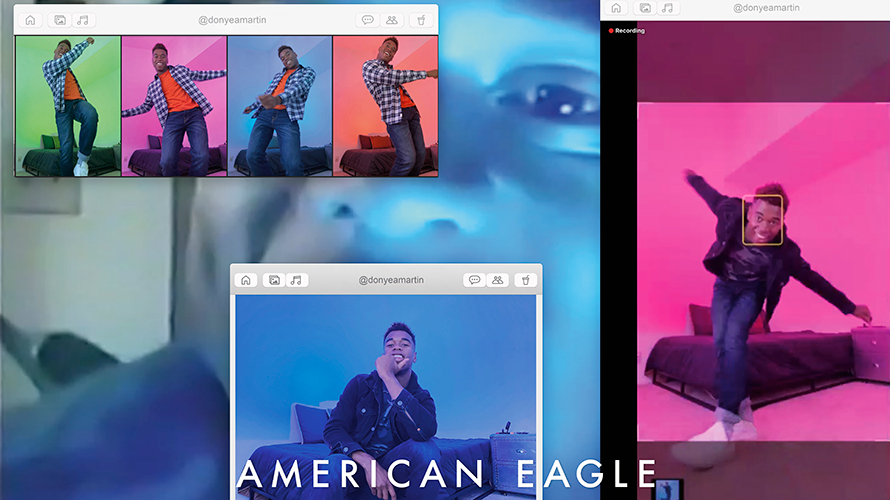 For American Eagle's latest campaign, the cast shot all content from their bedrooms and styled themselves in the brand's clothing. - Credit by American Eagle Outfitters

TikTok isn’t usually associated with a school curriculum. Typically, students hide their phones under their desks, pray their teachers don’t notice that they’re scrolling through the app, and take their shot at fame after class.

But American Eagle (AE) seems to think that Gen Z’s favorite app could actually have some educational value.

Following the launch of the #AExME Back to School ’20 Campaign, AE and integrated marketing agency Shadow saw another opportunity to excite students about returning to school. They hosted a virtual TikTok 101 class on July 21, which featured an emcee, “classes” taught by revered TikTokers and a xylophone “school bell” between sessions.

What set this event apart from other youth-focused brand efforts was that it had very little to do with AE itself. Through the class, as well as a TikTok competition and a campaign that gave featured dancers free rein to style themselves, the brand shifted its focus from selling T-shirts and jeans to the diverse personalities of the people sporting them.

“If there is a way you want to market to Gen Z, it’s going to be through TikTok,” said TikToker Wisdom Kaye. “We spend all of our time on our phones.”

AE has certainly met this generation where its interests already lie by launching its TikTok #InMyAEJeans challenge. The competition incentivizes users to create their own dance for the chance to win a duet post with the face of its campaign and the second-most followed creator on TikTok, Addison Rae.

Shadow representatives explained at the event that because there is an innate separation between the working adults behind these campaigns and Gen Z itself, it was important to let the young cast call the shots.

“Their ability to hone in on individuality and comfort for all is super inspiring,” said dancer Hannah Hawkins, who was also a Back to School cast member. “We were able to be a part of the creative process, from lighting to setup to makeup.”

The upbeat, dance-centric ad campaign features a diverse group, a nod to the brand’s long-term commitment to inclusivity, which it has previously showcased through expanded size charts and diversified ads.

Before purchasing a product on the website, customers are shown examples of real people sporting the item, images that are pulled from Instagram photos with the hashtag #AExME.

“I have followers in all different shapes and sizes,” said Denise Mercedes, a longtime American Eagle partner and advocate for body positivity within fashion. “It’s great that I’m able to post something and know that I’m not excluding any part of my audience.”

Kaye said TikTok allows users to “share what they want and really be themselves,” making it the ideal platform to reach a generation that demands a personal connection with the brands it supports.

“There’s a desire among Gen Z to accept people for who they are, regardless of their body types, gender identities or sexual orientations,” he added.

Join Dwyane Wade, Julian Duncan, Andrea Brimmer, Rick Gomez and more at Brandweek Masters Live, on Sept. 14-17, for main stage insights, in-depth Masterclasses and more. Register now (early-bird rates expire 9/1)
Emmy is a senior journalism major at The College of New Jersey with minors in Spanish and broadcast journalism. She has previously worked as editor-in-chief of her college newspaper, The Signal, as well as an intern at Tribune Publishing Company. Emmy is looking forward to contributing to Adweek as an intern working with its breaking news and audience engagement teams.
Kaila is an intern for Adweek in the Brand Marketing Department, and covers news in brand marketing and retail. She is a rising senior at Villanova University pursuing a degree in PR & Advertising and Journalism.