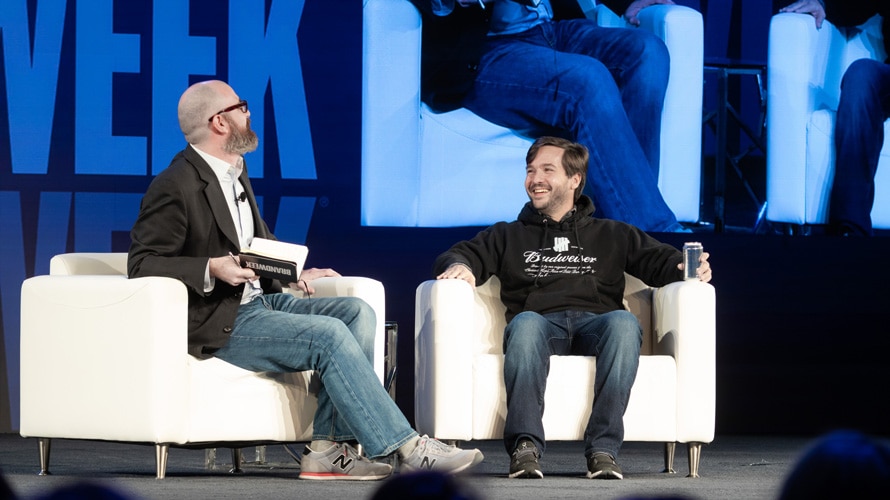 AB InBev's Pedro Earp describes the company as being in the business of "bringing people together." - Credit by Sean T. Smith for Adweek

PALM SPRINGS, Calif.—For a global company with beer brands around the world, some of which were created hundreds of years ago, Anheuser-Busch InBev still tries to keep a Day 1 mentality to remain a pioneer in the business.

It’s one way the brand is thinking about its future and remaining relevant, according to Pedro Earp, global CMO and ZX Ventures lead for AB InBev at Brandweek.

In a conversation with Adweek’s brand and tech editor, Josh Sternberg, Earp spoke about the company’s future, the Super Bowl and how AB InBev keeps the consumer at the center of everything it does.

For a long time, AB InBev existed solely as a beer company, Earp admitted. Though the beer category is growing in 75% of emerging markets, AB InBev needed to go beyond just beer, so earlier this year it ramped up investments in products like Natural Light Seltzer and acquiring Babe, a canned wine product.

“We’re in the business of bringing people together,” Earp said.

To fulfill this goal, AB InBev focused on three big trends in the market: “premiumization,” health and wellness, and authenticity. These trends were identified based on consumer behavior, according to Earp, and in order to pursue them AB InBev has experimented with a variety of products such as Michelob Ultra, a low-calorie beer that’s the fastest growing beer brand in the U.S. and which AB InBev just brought to 12 markets.

But Earp said it wasn’t necessarily just identifying these trends; the company needed to identify its capabilities and how it could scale and meet these trends. Earp pointed to AB InBev’s ability to sell beer anywhere in the world with its distribution network, scale products at its breweries and build global brands.

The death of the CMO role

There’s no shortage of chatter in the industry about the waning role of the CMO and what their purpose is. Though Earp is a CMO himself, he said he believes that “marketing will lose a bit relevance over time,” but what a marketer can do “have never been more important.”

Earp broke it down into three categories: The Marketer 1.0 is a traditional one that focuses on mass marketing; Marketer 2.0 is looking at scale, full-funnel and personalization; however, Marketer 3.0—the marketer of the future—is someone who’s not siloed in solely thinking about marketing but is involved with the data science team, the packaging of the product and thinking about consumer trends.

At AB InBev, everyone’s on the same team

Whether an idea comes from the brand team, the agency partners or Draftline, the company’s own internal agency, Earp said it’s all one team to him.

It’s only November, but the Super Bowl is already on AB InBev’s radar, with Earp saying on stage that the company will most likely produce between six and eight ads for the 2020 game that will extend beyond last year’s total 6.5 minutes of airtime.

For AB InBev, the Super Bowl represents a moment when brands can become culturally relevant and enter the conversation. It’s also proving to have a more long-term effect: Earp said the company sometimes sees more impressions and views before and after than when the Super Bowl commercial actually airs, making the investment “worthwhile.”

However, he acknowledged the challenges of producing work for an event of this scale because the investment needs to satisfy a variety of metrics, from the traditional ROI but also becoming part of the culture and remaining authentic to the brand.

“For you to see the ROI, it’s gotta be worthy of the attention of people,” Earp said. “It’s gotta be true to all these metrics, but it’s [also] gotta be good—that’s why the Super Bowl is so hard.”

But it’s also a chance for the company to challenge the current cultural moment and reach new heights beyond the Big Game.

“Why not challenge the team to have Super Bowl spot-like quality commercials throughout the year, ’cause then we have the conversation be less about interruption and more [about] entertainment,” Earp said.