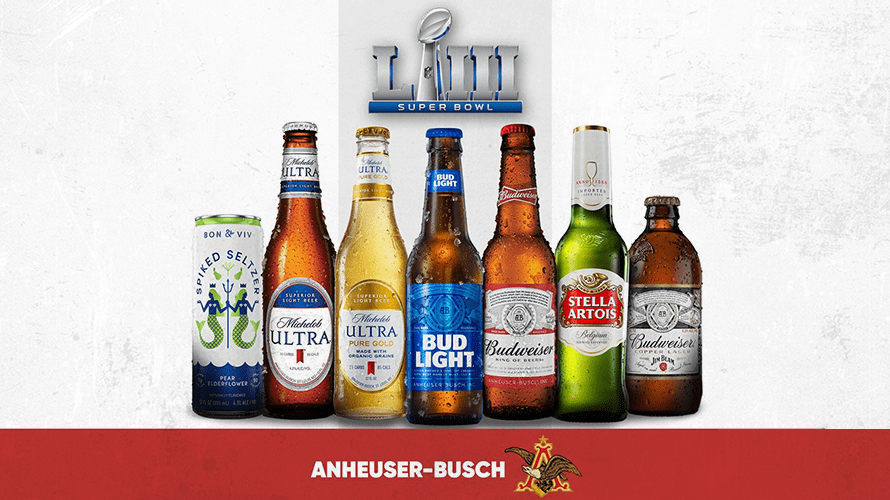 Anheuser-Busch is planning its largest Super Bowl lineup ever this year. The company will tout five brands and seven products during the Big Game with a massive media buy of five-and-a-half minutes of airtime.

The beer giant will feature Budweiser, Bud Light, Michelob Ultra, Stella and Bon & Viv SpikedSeltzer during eight commercials—four 45-second spots, three 30-second spots and one 60-second ad—during the Feb. 3 game. Products highlighted will include Budweiser, Budweiser: Copper Lager, Michelob Ultra, Michelob Ultra: Pure Gold, Stella and SpikedSeltzer. Bud Light will have two spots in the game. Additionally, the company will have four billboards and four bumpers during the game (one per quarter) as well as a bumper before and after the game.

The company, which has exclusive alcohol advertising rights, usually has roughly four minutes of airtime during the game. This year, it is betting big on Super Bowl as part of a strategic push to “elevate beer,” according to Anheuser-Busch InBev’s U.S. CMO, Marcel Marcondes.

“Beer is evolving a lot, the category is evolving and as the leaders in the category we want to lead this process of elevation and evolution for the beer industry,” said Marcondes. “We [decided to] use Super Bowl as a big platform to start bringing the strategy to life.”

Part of that strategy is maximizing the company’s time during the game as a way to capture consumer attention at the right time. “Attention is the new currency and Super Bowl is such a unique moment in culture when people are paying attention, watching TV and more than that, they are willing and looking forward to watching TV commercials so for that reason we decided to bet big,” said Marcondes.

“Super Bowl is a unique stage that gives us the chance to bring all of this to life, set the tone for the brands for the rest of the year and to really make crystal clear what each of those brands stand for,” said Marcondes.

With the innovation theme, each of the products will make their Super Bowl debut this year. By highlighting newer products like Michelob Ultra’s: Pure Gold—the first organic beer the company is advertising during the Super Bowl—and Budweiser: Copper Lager, Anheuser-Busch is showing that it is changing as the category is evolving, according to Marcondes.

As for Bon & Viv SpikedSeltzer, “seltzers are growing” and “we are the first spiked seltzer of the market,” so the company is looking to relaunch the product and “push against competition,” explained Marcondes.