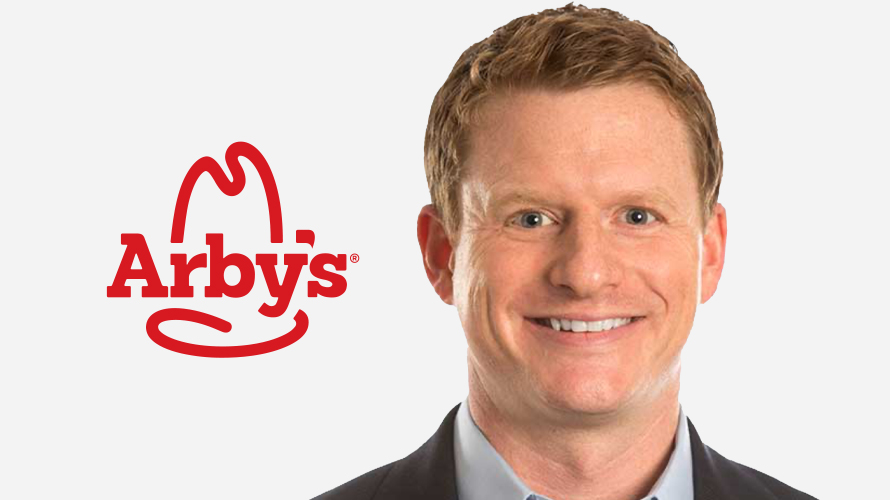 Arby's CMO Patrick Schwing had a more challenging learning curve than most, having joined the chain on March 1. - Credit by Arby's

Fast-food chain Arby’s still has “the meats,” but in response to the pandemic, is taking a slightly unorthodox approach to how it produces its ads, said the company’s CMO Patrick Schwing in an interview with Adweek.

One of its latest spots, which began airing in June, markets its pecan chicken salad sandwich. And the ad doesn’t pretend to be new; rather, it’s an old ad featuring two seasonal options, one of which is no longer on the menu. Rather than cut a new spot, Arby’s chose to simply blur out the product it no longer offers.

“It really cuts through a cluttered media landscape and drives a small moment of levity,” Schwing said.

The approach certainly saved the company production time and money. It also happens to be honestly self-deprecating, and in an odd way, entertaining.

The idea to blur out the discontinued sandwich was the brainchild of Arby’s agency of record Fallon. The decision was partly out of necessity as ad production was curtailed or hindered during the pandemic, Schwing said. “It produced great ad scores,” he added.

Arby’s is also unveiling three market-fresh wraps via new ads, which began airing in July, that deploy animation, another inventive way of working around the challenge of producing content due to Covid-19, he said.

The aim of the spots is to showcase that the chain offers more than roast beef sandwiches, though that remains a core product, Schwing explained. “We pride ourselves on menu diversity. We have a great roast beef heritage. But the last few years, [we’ve developed] expertise across the meats,” Schwing said.

Specifically, Arby’s believes eaters are now looking for alternatives to the greasier options they’ve been ordering since the beginning of the pandemic, he said. “Diets could use relief from those options,” Schwing said.

“It’s [also] an opportunity to reintroduce the brand,” he continued.

Investing in brand building across channels, including television, digital, print and coupons initially had to be put on hold, he noted. But once Arby’s had some relative confidence it could operate its business through drive-thru and delivery, it was time to welcome customers and invite new guests.

Indeed, the brand and business remain healthy despite the outbreak, building on 10 years of sales growth, Schwing said.

For Schwing, it’s been an unusually challenging and short learning curve. He joined Arby’s as CMO on March 1, mere days before the pandemic began to have a deep impact on the restaurant business in the U.S.

Schwing previously spent 16 years at consumer products giant P&G, most recently heading up its Oral-B power toothbrush division globally. There he oversaw the introduction of artificial intelligence technology into the brand’s electric toothbrushes. He also worked on marketing for a number of the conglomerate’s businesses, such as Pantene, Head & Shoulders and Herbal Essences.

Nevertheless, with sales for Arby’s newest offerings exceeding their goals—no doubt in part due to the chain’s marketing efforts—Schwing appears to be settling in quite nicely.