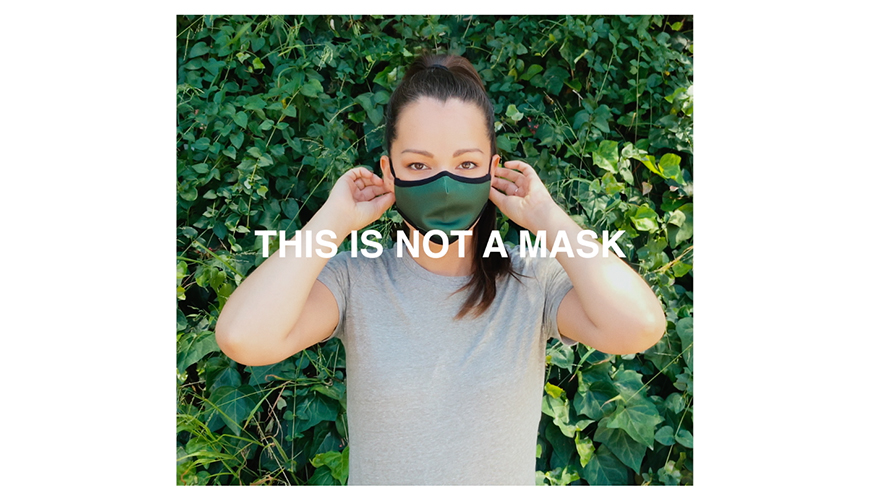 Vistaprint highlights the positives of wearing masks to keep friends and strangers safe. - Credit by Vistaprint

It’s a deft marketer that can navigate the political fray these days, especially on a hot-button topic like face masks.

Vistaprint aims to do just that with a campaign called, “This is not a mask.” The spot, which launched over the weekend, shows kids playing outdoors and adults visiting their local haunts. They’re all wearing face masks with bright colors and snappy designs.

“This is not a mask,” the ad says. “This is a sign of love. This is solidarity.”

Vistaprint, perhaps best known for making business cards, has pivoted to creating face masks during the coronavirus pandemic, donating a portion of the proceeds to small businesses.

The company intends to reframe the conversation around the beleaguered face mask, showing neither red nor blue state bias.

“We know that masks have become politicized, but our feeling is that they aren’t a political statement but rather a means to getting back to some form of a new normal,” said Ricky Engelberg, Vistaprint’s CMO and executive vice president. “A community where everyone wears masks has a far greater chance of getting comfortably back to the activities and things people love.”

The work comes from Vistaprint’s in-house team along with boutique agency Ghostship in Portland and postproduction firm Loom in Los Angeles. The stars of the 30-second spot—actually Ghostship employees’ friends and family—shot the footage themselves with iPhones and ring lights supplied by the brand.

Though he was initially unsure of what the remote filming would yield, Engelberg says “it became a really thrilling process to see all the unique moments captured.”

“This Is Not a Mask” debuted during a 6-hour weekend musical experience, called “Small Business Live,” from organizer Superfly with Lauryn Hill, Leon Bridges, Brittany Howard and other artists. The spot will also get distribution on Facebook, Instagram and Pinterest.

For a peek into the controversy around face masks, just consider some recent developments. Some conservative activists have been publicly burning face masks, while President Donald Trump told The Wall Street Journal that some Americans wear masks not as a first-line defense against the coronavirus but rather “to signal disapproval” of him.

Some states and cities are reviving their mandatory mask rules in the wake of rising Covid-19 cases, and AMC Theaters stutter stepped on its optional-mask rule announced on Thursday. Moviegoers will be required to wear them after all when the chain reopens next month, execs said Friday.

In the meantine, Vistaprint, became an unlikely supplier in a face mask market dominated by fashion and retail brands. The online printing and digital marketing company is taking the opportunity, without weighing in on the debate, to cement its role as a small business champion.

“We have a chance to speak as their partner and make a statement to get people to understand that masks are a sign of connection with their greater community, be that their neighbors, friends, family or the stores and restaurants that mean so much to them,” Engelberg said. “Wearing a mask is a little thing everyone can do right now that says they care.”

Vistaprint has donated $1 million to the Save Small Business fund it co-founded with the U.S. Chamber of Commerce Foundation and $500,000 to the NAACP to support Black-owned small businesses.